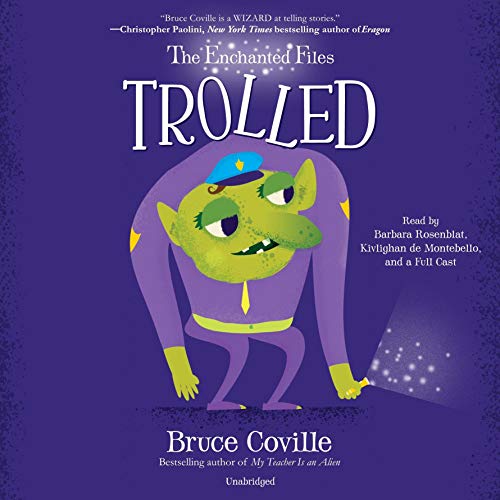 If you liked the movies Elf and Shrek, you'll love The Enchanted Files - a magical, hilarious comedy series about fantastical creatures in the modern world by the best-selling author of My Teacher Is an Alien: Bruce Coville!

Any troll worth their farts knows that a proper troll should:

But Ned is not just any troll. Even though Ned is nearly seven feet tall, with a nose the size of a pickle, Ned has a heart full of love! A heart that swoons over poetry and craves true friendship!

And when it comes to humans...it's complicated. So complicated that, long ago, Ned fled the Enchanted Realm for the one place no one would notice a troll hiding in plain sight: New York City. But one human boy - Cody - has noticed. And Cody's snooping leads to a wild and hilarious adventure that takes listeners from the tunnels underneath Grand Central all the way to the Enchanted Realm (and back again!).

What listeners say about The Enchanted Files: Trolled

My ten year old son and I really enjoyed this story. There was great intonation in the multiple narrators voices. The story was always moving along and was never dull.