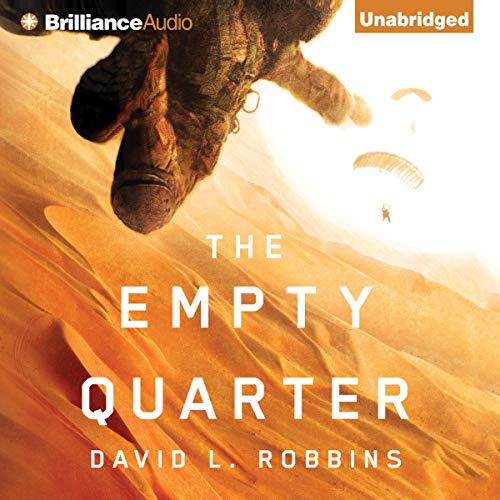 By: David L. Robbins
Narrated by: Luke Daniels
Try for $0.00

Every member of the Special Ops US Air Force pararescue jumpers, the PJs, swears by the motto "That Others May Live." A top-secret mission to save a kidnapped Saudi princess will put that oath to the ultimate test.

With a force of armed men, a former mujahideen chases across the desert of Yemen to recover his Saudi wife, kidnapped by her powerful father, a prince of the Kingdom. The kidnapping turns violent, she is badly wounded, and the PJs are dropped into the vast sere badlands to rescue the princess and a young American diplomat swept up in the plot. The mission becomes a minute-by-minute race between the pursuing husband’s band of tribal allies and the PJs rushing to the rescue, as the princess’s life seeps away.

The Empty Quarter is a pulse-quickening tour de force featuring the tactics and men of modern combat search-and-rescue and the complex politics of today’s Arabian peninsula. It’s a moving tale of desperate love and sacrifice set in the wastes of the Rub’ al Khali, the world’s largest and harshest sand desert.

What listeners say about The Empty Quarter

Took me a while to get into it.

I started this book, then stopped before the end of the second chapter. I had a hard time connecting to the story. I read another book that, coincidentally, had some "military" stuff in it & decided to give this book another go. I'm glad I took the time to "get into it", and ended up enjoying the book. Being both a woman & non-military, I think it was initially hard for me to connect to the military "lingo", but, I looked up the things I didn't "get" & eventually it made sense & I could follow the story. I also looked up some of the Middle Eastern references to try to better understand that part of the story.

This story is about a US Special Ops group that gets little attention: the Air Force pararescue jumpers. The setting is Yemen where a Saudi princess has been kidnapped.

Some aspects of the book are okay but most of this book is hohum. There isn't much here to get excited about, so if you see another title that looks interesting I would move on to that title.

Read both books on the PJ hope there more in the planning stage ! Hope they include Josh and if he joins the team. Story held my attention and I had difficulty stopping !

This is a book that you don't want to stop listening too and when you do you keep thinking about it! It's as if you have been watching a movie. Great story. Great characters. Great writing. Great descriptions. GREAT NARRATING. I consider this author a great and much needed fine. My new favorite.

Wow when I started the book the first time I thought it to be not interesting ......so I put it asside.........moved in to a few other books. I can't even say what made me go back and try it again.......But I can say I'm so glad I did! Living here in the kingdom of Saudi Arabia I can say the story captured the depth of passion the Arab had for the ones he loves. The solidarity of the gulf people when helping each other is a must. As an American I was also pleased how it showed the capability of our guys to do what's right not just follow orders blindly like robots. This was an amazing book!

gives a good story about the things that Guardian Angel the pararescuemen. and what they will do So That Other May Live

Entertaining book. At times could be a little slow, but definitely worth reading in a long weekend or airplane.

I really like this book . It has excitement and thoughtfulness, adventure, love... I think everyone will enjoy it.

the narrator does it great job with the dialogue. I do wish, however, that in the non dialogue portions he sounded more like a storyteller and less like an announcer.

great book, makes you smell the blood, see the wounds, the desert, the people. good book