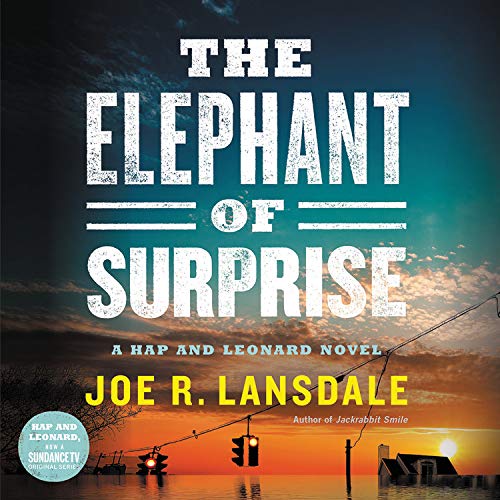 The Elephant of Surprise

Hap and Leonard are an unlikely pair - Hap, a self-proclaimed white-trash rebel - and Leonard - a tough-as-nails black, gay Vietnam vet and Republican - but they're the closest friend either of them has in the world.

After years of crime-solving companionship, something's changed: Hap, recently married to their PI boss, Brett, is now a family man. Amid the worst flood East Texas has seen in years, the two run across a woman who's had her tongue nearly cut out, pursued by a heavily armed pair of goons. Turns out the girl survived a mob hit, and the boss has come to clean up the mess.

On a chase that blows even the East Texas swamp grass back, Hap and Leonard must save the girl and vanquish her foes before the foes get them first.

The Elephant of Surprise is rich with Lansdale's trademark humor, whip-smart dialogue, and plenty of ass-kicking adventures.

"Hap and Leonard remain two of the most likable characters in crime fiction." (Kirkus Reviews)

What listeners say about The Elephant of Surprise

Hap and Leonard at it again.

Hap and Leonard waste no tome at all to find themselves mixed up in some extreme non stop action that does let up the entire book. Fans of series will not be disappointed by THE ELEPHANT OF SURPRISE.

But this seemed a little less entertaining than the rest of the books have been. I’ll be reading the next tho.

Lansdale is a fantastic storyteller. The plot, our intrepid, aging heroes try to protect a young woman who saw and knew too much from a boss with lots of resources and powerful killers at his disposal set against the backdrop of hurricane barreling into east Texas from the Gulf. There's so much darkness and water as the boss makes his assault. Lansdale paints a great tale with the color and vibrancy as he works Hap and Leonard through this terrible storm of destruction. It's definitely worth a listen.

Definitely not slow. One of the fastest paced books from Lansdale. If you're a fan of Hap and Leonard do not let the length discourage purchasing this.

Great Book. Love me some Hap and Leonard...Great


Another Great Hap and Leonard. I can't get enough!! I'm working my way through all of the books!!

you'll listen to this book either way it's not the the usual exciting Hap and Lenard ride but I enjoyed it. seems like Joe r might be getting tired of the series. it's a shame because I'm not.

loved it I didn't want to put the book awesome job! Can't wait to read another book. loved all the surprises it kept me on my toes and kept me wanting to read more.

Hap and Leonard are the greatest duo in history. They are opposites but make one hell of a team. I can't get enough of these guy!! Keep them coming Joe Lansdale, please.

For Hap and Leonard fans

Long on action, short on plot. Probably only enjoyable for Hap and Leonard fans. The narration was great; Audible, please have all entire Hap and Leonard series re-recorded by Christopher Ryan Grant.