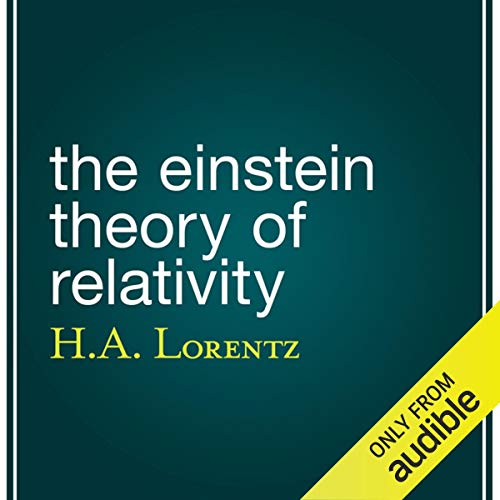 The Einstein Theory of Relativity

Whether it is true or not that not more than 12 persons in all the world are able to understand Einstein's Theory, it is nevertheless a fact that there is a constant demand for information about this much-debated topic of relativity. The books published on the subject are so technical that only a person trained in pure physics and higher mathematics is able to fully understand them. In order to make a popular explanation of this far-reaching theory available, the present book was written.

What listeners say about The Einstein Theory of Relativity

The author obfuscates the simplicity of the Theory of Relativity. You will be further mystified after reading this book, if you really are seeking to understand the theory. Reminded me of tests in college where you had to fill a 'Blue Book' with words to pass a Psychology test. After listening to this book three times, I conclude that the theory is sometimes an improvement on Newtonian theory of gravitation, but probably needs further correction and fails altogether in predicting the red shift of light for stars with light passing near our Sun. The author states that no reconciliation for that discrepancy has been made. That alone requires a change to be forthcoming and requires the theory to not be regarded as a fact but a step in the right direction for many properties of high velocity particles. One wonders at the other claims of the theory, with regard to twins separated by rocket travel. Do they also demonstrate no red shift parallel in discrepancy. I do not recommend this book as a helpful tool in your quest to understand Einstein's theory. The first few sentences in chapter 4 exemplify the author's obfuscation ability completely. The statement that "...the form of comparison used by Einstein to present the theory is the only possible one." begs further elaboration that is not provided, especially in light of the theory's failure in one area. I realize that this negative review will probably cause many physicists to read the book in defense. Oh well...

Excellent narration! Read along in Kindle.

Interesting that the language written in this book is so relevant today. Besides the old ether theory, it's amazing that almost 100 years later, the theory of general and special relativity holds so true even now. Had Einstein never discovered this, our calculations would still remain slightly miscalculated by the Newtonian Laws of gravity. Although they still serve an important purpose, they never could explain the orbit of Mercury, discover black holes, account for satellites time dilation correction, etc.

This was very impressive! I enjoyed listening to it a lot. I feel like I have a much better understanding about the theory now.

It explains the theory in the most simple way

This theory has been very useful for human history and science. As all common knowledge it will be surpassed by many other theories.

This is a great summary of one of physics greatest achievements. Lorentz highlights the pertinent common sense points made by Einstein.

short and not simple.

I liked it. thought it was a little short. Though if it was any longer I believe my head would have exploded.

What disappointed you about The Einstein Theory of Relativity?

Said essentially nothing about relativity theory. Just a short, rambling, unfocused, truncated description of how Einstein derived the theory, but nothing about the theory itself.

Would you ever listen to anything by H. A. Lorentz again?

What aspect of Brian Troxell’s performance would you have changed?

The performance wasn't all that bad

None. It is worthless and disappointing.

Einstein has put an end to this isolation;

"it is now well established that gravitation affects not only matter, but also light.”
― Hendrik Antoon Lorentz, The Einstein Theory of Relativity A Concise Statement


Hendrik Antoon Lorentz and Pieter Zeeman shared the 1902 Nobel Prize in Physics and his work would form the bases of Einstein's 1905, paper entitled "On the Electrodynamics of Moving Bodies" today known as the theory of special relativity, but at the time it was also known as the Lorentz-Einstein theory . This booklet was Originally published November 19, 1919 when some of Einstein's predictions were still to be proven, like redshift, but the theory was intimately understood by the writer since he had expressed the theory and equations that formed its bases, like all good scientist he only deals on what they can prove, not belief, and recognizes when some of the theories have not yet been proven.
A very interesting booklet that is part of so much history and change in our world, and our understanding of physics. With some classical explanation of the theory of relativity..
Einstein knew that few people in the world understood his work and that Hendrik Antoon Lorentz was one of the few that did.

“Royal Society and the Royal Astronomical Society held especially for that purpose recently in London, it was the general opinion that Einstein's prediction might be regarded as justified, and warm tributes to his genius were made on all sides. Nevertheless, I cannot refrain, while I am mentioning it, from expressing my surprise that, according to the report in The Times there should be so much complaint about the difficulty of understanding the new theory. It is evident that Einstein's little book “About the Special and the General Theory of Relativity in Plain Terms,” did not find its way into England during wartime. Anyone reading it will, in my opinion, come to the conclusion that the basic ideas of the theory”
― Hendrik Antoon Lorentz, The Einstein Theory of Relativity