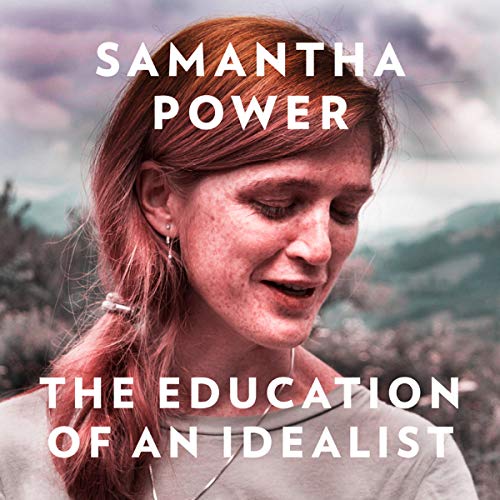 The Education of an Idealist

A New York Times Notable Book of The Year

An Economist Book of The Year

A Times Literary Supplement Book of The Year

Pulitzer-Prize winner Samantha Power is widely known as the moral voice of her generation. A relentless advocate for promoting human rights, she has been heralded by President Barack Obama as one of America’s 'foremost thinkers on foreign policy.'

The Education of an Idealist traces Power’s extraordinary journey, from Irish immigrant to human rights activist to United States Ambassador to the United Nations. Power began her career as a war correspondent and as a vocal critic of US foreign policy, and then put her ideals into practice while working with Obama in the Senate, on the campaign trail, and throughout his presidency. Power’s perspective on government is unique, as she takes us from the streets of war-torn Bosnia to the Situation Room and out into the world of high-stakes diplomacy.

In her characteristically gripping prose, Power illuminates the messy and complex worlds of politics and geopolitics while laying bare the searing battles and defining moments of her life. She also reveals what it’s like to juggle the demands of a 24/7 national security job with raising two young children. And, in the face of great challenges, she shows us not just how the United States can lead, but why there is always something each of us can do to advance the cause of human dignity. The Education of an Idealist is a humorous, stirring, and ultimately unforgettable account of the world-changing power of idealism - and of one person’s fierce determination to make a difference.

"Her highly personal and reflective memoir...is a must-read for anyone who cares about our role in a changing world." (Barack Obama)

"Samantha Power's book is honest, personal, revealing. It is about the development of a young woman's inner strength and self-knowledge. But it is also a political book, alert to both the power of political will and its limitations." (Colm Tóibín)

"It’s a profound, heart wrenching, uplifting, and emotional journey through her life and what she’s seen; starting in her youth in Ireland, and taking us through places like Bosnia, Kosovo, Rwanda, Sudan, and eventually the White House...All while navigating war zones and political culture as a woman and eventually a mother." (Sophia Bush)

What listeners say about The Education of an Idealist

This book kept me hooked from beginning to end; I enjoyed the narration, the structure, and most of all, the content.

I loved this heartfelt memoir by a truly remarkable woman. It's unflinchingly honest and filled with humility. A wonderful insight into foreign diplomacy and the struggles of balancing ones morals with the realities of the world in which we find ourselves.

I cannot recommend this book more. Samantha Power is an inspiration to us all. During these globally dark times, this book reminded me that there are still people out there fighting for what is right!

Samantha power is an inspiration

compelling and inspiring and also an excellent narrator of her own writing. would highly recommend

Power's reflective memoir over a varied career and full life is inspiring and moving. Hearing the personal and the professional mixed together, one can understand that she evokes and lives the essence of the Universal Declaration of Human Rights. In addition, as a gay man listening to a straight ally discussing her loving and long sustained support of LGBT+ equality, I felt at home in her book, which I had not expected.

I loved this frank and honest memoir which covers so many major events in recent history, while also being very human and at time funny. I found it interesting that the UK was mentioned only once, as far as I remember. Is the so-called "special relationship" a delusion, as some think, or partly influenced by Irish origins, which would be understandable, even if a little biased as the UK was involved in many of the events documented. Nonetheless, this is an important book, as an idealist myself, I truly value the work of this lady and long for a day when the USA can again hold its head high when it will hopefully return to the values so eloquently depicted here.

Lved Samantha's voice. Enjoyed it very much. i missed more self critical view ( on US policy , not Samantha herself), which is aforded by hindsight.

Interesting to gain insight into how prominent leaders such a Power think and approach their lives and job. She has an interesting story to tell and it’s worth listening to if interested in international politics & diplomacy

Couldn’t recommend this enough. An inspirational autobiography and very eloquently written and read. Thank you, Samantha, for sharing your story!

Samantha Power is a true inspiration around the world. I am grateful for this book which gives hope in uncertain times.

Samantha Power's vivid account of her life and work is both a time capsule of the recent past and a candid and personal window into the personal and moral struggles of a senior U.S. official dealing with among other things life and death. The story is deeply personal, sketching a childhood and early career which is relatable and engaging. It provides a window on Power's personal politics, her ethics, and the moral quandaries that she grapples with throughout her life. Samantha Power is no ordinary diplomat and her account of events and her involve are testament to that. The book is an evening in an Irish family home, a behind-the-headlines documentary, and a declaration of values and passions. A great read.

Brilliant book by an inspiring woman! So refreshing to experience a more humble yet genuinely caring approach to meaningful matters. Expanding horizons.

Behind the scenes of power

I absolutely loved this book - and it’s even better as an audio book because you can hear how hard some of these personal and political stories were to tell. Great companion piece if you liked Becoming as an insight into the Obama years, but it’s much bigger than that: Power has honest, thoughtful things to say on everything from life as a working parent of little kids (mine are a similar age and it gave me perspective on how much easier my work juggle is!) or behind the scenes from the White House and the U.N.. Samantha would make the best dinner guest, she’s a great storyteller in the best Irish tradition. Can’t recommend this enough. Thanks for sharing your story.

Samantha’s story is a great read from an inspiring woman. Not only an insightful account of US and global political machinations, also a refreshingly honest story of an “on- purpose” woman and how she juggles her higher calling as an advocate with family and personal growth. Loved it and I’d love to meet the author. Monique

A thoroughly compassionate and inspiring woman. Her story is one that overcomes both personal and global challenges. It is told with grace and humilty.

This is an inspirational story, told with genuine vulnerability and frankness by one of the world’s most impressive, inspirational and interesting people.