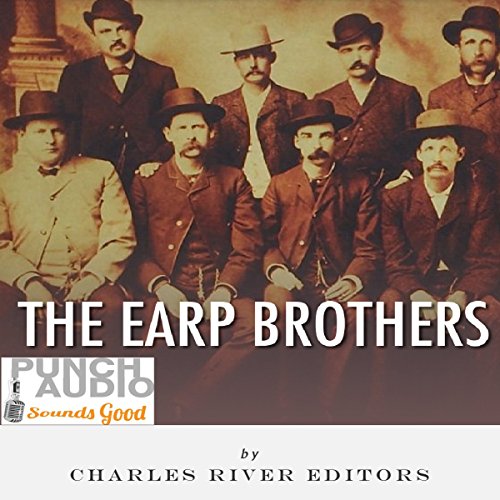 Of all the colorful characters that inhabited the West during the 19th century, the most famous of them all is Wyatt Earp (1848-1929), who has long been regarded as the embodiment of the Wild West. Considered the "toughest and deadliest gunman of his day", Earp symbolized the swagger, the heroism, and even the lawlessness of the West. He was notorious for being a law enforcer, gambler, saloon keeper, and vigilante. The Western icon is best known for being a sheriff in Tombstone, but before that he had been arrested and jailed several times himself, in one case escaping from prison. And he was not above gambling and spending time in "houses of ill-fame".

Though they have long been overshadowed by their more famous brother Wyatt, Virgil and Morgan Earp played decisive roles in some of the most famous events in the history of the Old West. Most notably, the two brothers were at Wyatt's side for America's most famous gunfight: the gunfight at the O. K. Corral. Though the gunfight lasted less than a minute, it is still widely remembered as the climactic event of the period, representing lawlessness and justice, vendettas, and a uniquely Western moral code. Fought in the middle of Tombstone, Arizona, the gunfight pitted the three Earp brothers and Doc Holliday against Billy Clanton, Tom McLaury and Frank McLaury. By the time the 30-second gunfight was over, the McLaury brothers were dead in the street; Billy Clanton had suffered a painful and fatal gunshot wound to the chest; and Holliday, Virgil, and Morgan Earp were all wounded.

What listeners say about The Earp Brothers: Wyatt, Virgil and Morgan Earp

So much more than the gunfight at OK Corral

Many folks know the Earp brothers from the gunfight at the OK Corral in Tombstone, AZ. Wyatt Earp in particular is seen as an icon of the Wild West. However, this book gives you so much more than that. Each of the Earp brothers was a flawed human, leading interesting lives. There’s law breaking, brothels, drug use, affairs and multiple wives, gambling, and the rough & tough enforcement of the law.

Charles River Editors has put together yet another fascinating read. I knew very little about the Earp brothers before diving into this book and now feel that I can hold a decent conversation about them. This book starts off with their family back east and shows how the brothers grew up, went separate ways, and then ended up together again in AZ. The story doesn’t stop there and the book continues the tale of each brother, following them until each one passes out of history.

The Earp’s flaws and sometimes outright lawlessness isn’t sugar coated or glossed over in this book. Indeed, we get to know the factual story for each man, including all their documented indiscretions. I especially like that when the facts become a bit muddied the book is honest about questionable or conflicting historical sources.

My only criticism is that sometimes I would lose track of which brother the story was focused on at any one time. Often, the book would start a section or perhaps a paragraph with the full name (i.e. Wyatt Earp) but then just refer to the man as Earp the rest of the section. So if you missed the full name, you could easily think the story was still focused on whichever brother before. I wish the book had stuck with first names when referring to the Earp brothers for much of the book instead of going with Earp, Earp, and Earp for like 80% of the book. As each brother dies off, it becomes easier to follow which brother is doing what. I expect this wouldn’t be such an issue with a print or ebook edition as you can quickly flip back and visually check which brother you are reading about at any given time.

Overall, this was a very educational book for the uninitiated. I really liked that the gunfight at Tombstone did not make up the bulk of the tale, as there was so much more to the Earp brothers. The book ends by giving a list of various movies made based on the Earps, nearly all focused on the fight in Tombstone.

The Narration: Alex Hyde-White was a good choice for this book. I really felt that he enjoyed narrating the book as much as I enjoyed listening to it. His appreciation for the subject matter came through.

must better and comprehensive account of the Earp's. I've always been a fan and even though this was a darker and seems to be more accurate account I still love the Earp history

learned a lot I never knew , far from perfect they were men just like all men
sinners

Finally a concise history of the Earp family and its three best known members, Virgil, Wyatt and Morgan. Loved it.