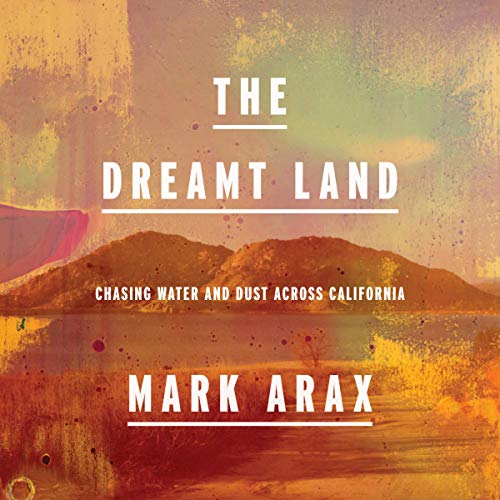 A vivid, searching journey into California's capture of water and soil - the epic story of a people's defiance of nature and the wonders, and ruin, it has wrought

Mark Arax is from a family of Central Valley farmers, a writer with deep ties to the land who has watched the battles over water intensify even as California lurches from drought to flood and back again. In The Dreamt Land, he travels the state to explore the one-of-a-kind distribution system, built in the 1940s, '50s and '60s, that is straining to keep up with California's relentless growth.

The Dreamt Land weaves reportage, history and memoir to confront the "Golden State" myth in riveting fashion. No other chronicler of the West has so deeply delved into the empires of agriculture that drink so much of the water. The nation's biggest farmers - the nut king, grape king, and citrus queen - tell their story here for the first time.

Arax, the native son, is persistent and tough as he treks from desert to delta, mountain to valley. What he finds is hard-earned, awe-inspiring, tragic, and revelatory. In the end, his compassion for the land becomes an elegy to the dream that created California and now threatens to undo it.

"There’s a new history of water use in California that’s fantastic. It’s called The Dreamt Land. It’s like John McPhee-level writing. It’s really worth it for the writing alone." (Linda Ronstadt)

"A mesmerizing new book that examines the nation’s most populous state through the prism of its most valuable resource: water. Call author Mark Arax, an award-winning journalist, historian and native son of the Central Valley, a Steinbeck for the 21st century." (Andy Kroll, Rolling Stone)

"The Dreamt Land is Arax’s grand history of California water, beginning before Spanish arrival and following the trail of man-made decisions that exacerbate the present.... Everyone can go back to pretending the land has been tamed as the fields and orchards once again expand. The Dreamt Land leaves us with the question: When the next dry spell comes, will we have gone too far?" (Gregory Barber, Wired)

What listeners say about The Dreamt Land

"The Dreamt Land" is almost perfect. It takes a pretty mundane topic, agriculture in California's Central Valley, and weaves fascinating story full of memorable character in language that is often poetic. It is an ode to a simpler time in California, but it recognizes that in reality those halcyon days ended with the Gold Rush.

The audio version might even be better than the print version because of Arax's reading. Normally, I believe authors make a mistake when they do not turn over the reading to trained voice actors, but Arax is the exception that proves the rule. His reading actually adds to the text, because he verbally underlines the most important passages and brings out a deeper layer of meaning and emotion.

The folly of California water management

Mark Arax does an amazing job weaving the history of the California Central Valley, its agriculture and the water that makes it possible, and the overreach and often shady dealing involved in getting that water. He illustrates the major developments with the stories of key families and places that shows their motivation and struggles in the context of their times. A fascinating history written with an often almost poetic turn of phrase that reflects his love and sadness for the Valley.

I was really looking forward to listening to this book, especially because the authors of books tend to be the best narrators; certainly on that count the book is great. However, there were several things about the book that didn't sit right with me. First, the author has written a history intertwined with many stories, including his own, which is great and unique, but as a result the tone of the book is overly poetic and polemical. A little bit of each of these would certainly make for a more compelling read, but in this book they overpower the general history, often at the expense of coherently communicating basic historical information. The other issue I had with the book is that while I don't begrudge the other his own opinion on the issue of water and agriculture in California, he often strays into topics that are only tangentially relevant and for which is polemic is neither professional nor accurate. The primary instance of this phenomenon concerns Father Junipero Serra. The author has wholly imbibed a completely shallow and ahistorical understanding of the Saint and the foundation of the mission system in California. More than this, he perpetuates easily refutes myths and simply gets many things factually incorrect when discussing this topic. Despite supposedly having consulted sources of all persuasions on the controversial questions of Father Serra, it quickly becomes clear that he took his own bias with him into reading the work of others, the conclusion about whether Serra was a hero or a villain, as the other has it, preordained. Ultimately it's a good book, but the aforementioned tone and poetical style makes it rather hard to listen to at long sittings, or want to come back to listening because of the feeling that one has heard many well spoken words but not really learned any of the important historical information.

Learned a lot about a part of
California where my parents lived their
retirement.
well written and narration was excellent!

worth the long read...

This is an enormously ambitious book, insignificant part because the Central Valley is so geographically and culturally complex, and while the themes may be common, the actual stories in each area are so varied. In a lot of ways this book could be seven or eight different smaller books. but having them all put together like this is still worthwhile and rewarding.

An amazing story and even better story telling. the next Cadillac Desert but with more personality and deeper, more compelling truths about California and the world.

Great story and narration by one of our own

I loved it. I am a fifth generation farmer in the Valley, and while I don't agree with all of his conclusions, Mark understands who we are and he loves the Valley. This is a must read for anyone in California.

Powerful meditation on water in California.

you are drawn into a trance like state listening to it. you emerge with a deeper understanding of the state... and a sense of how hard it us make positive change and how important it is that we try.

California at long last needs to be a steward of this land!

Such a complex story that has been well written and well read. Has truly helped me to understand the challenges of the place I go home.