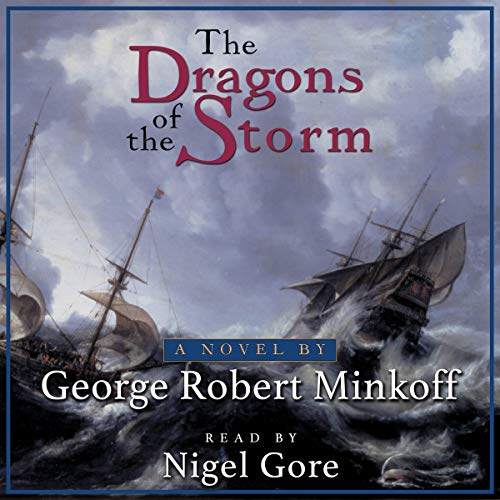 The Dragons of the Storm

By: George Robert Minkoff
Narrated by: Nigel Gore
Try for $0.00

Superbly narrated by British actor Nigel Gore, The Dragons of the Storm follows directly on from where The Weight of Smoke left off. Captain John Smith has been stabbed by a stingray and falls deathly ill. The old alchemist and mariner, Jonas Profit, doctors his wound, and to ease Smith’s suffering tells of the daring circumnavigation of the world by Francis Drake, 1577-1580.

A masterful interweaving of all the elements that contributed to the birth of the British Empire.

“The Dragons of the Storm is as enthralling as The Weight of Smoke. I think John Smith and Francis Drake would rejoice in George Minkoff’s lively re-creation of them.” (Edmund Sears Morgan, Yale University historian)

“Historically accurate, inventive in its language, and filled with exciting and epochal event, The Dragons of the Storm is a worthy successor to The Weight of Smoke.” (Peyton Moss, ForeWord Magazine)

“The Dragons of the Storm is a tour de force of sailing literature, focused on Drake’s circumnavigation of the world. Embedded in the story of John Smith’s Jamestown, it adds remarkable counterpoint and stretches to encompass not just the exploration of North America, but the Age of Exploration as well. Beautiful, riveting, and sweeping.” (Walter Bode, editor)

What listeners say about The Dragons of the Storm

The Dragons of the Storm is the second novel of the In The Land of Whispers Trilogy by the esteemed George Robert Minkoff and it has just been released in audiobook format this June to celebrate the 400th anniversary of the founding of Jamestown.

Beautifully written, immersive and intriguing, The Dragons of the Storm picks up exactly where The Weight of Smoke leaves off. Focusing on Sir Francis Drake’s circumnavigation of the world and intertwined with the adventures leading to John Smith’s Jamestown, this is pure literature, delivered to us as a form of sublime art!

Combining historic events with quality fiction, George Robert Minkoff has proved to us all that a trilogy of such epic scope and proportions can captivate our attention, make us reflect on the past and thanks to him, live in it for a few precious hours.

The Dragons of the Storm flows with life as an audiobook, narrated by the fantastic Shakespearean actor Nigel Gore. He is not just reading, he is acting the entire book, giving unique voices and accents to all the characters, pushing the story forward with his vivid descriptions of the surrounding world and keeping the listeners enthralled and mesmerized by this epic adventure of the English in the New World.

Nigel Gore is the perfect choice for this narration as he makes accessible this fantastic work to those who could have been daunted by the author’s specific writing style. When listening to the audiobook I got the distinct impression that I was hearing a play of epic proportions, set on an invisible stage, where only my imagination was the limit.

Listen to the sample and if you like what you hear, start this fantastic trilogy from its begining… You are in for a treat!

Please vote Helpful below if you liked this review and find more of them here and on theAudiobookBlog dot com.
Sometimes I post review at the author / narrator / publisher's request.