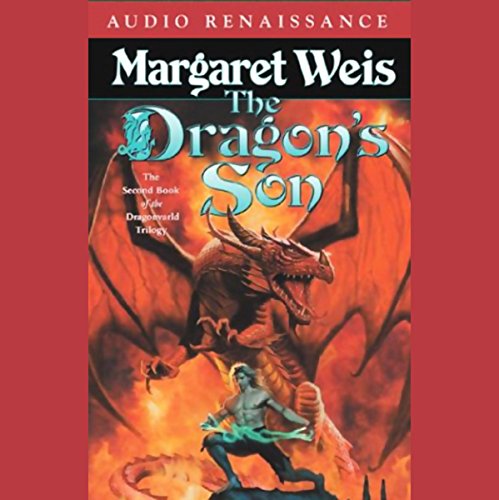 In Mistress of Dragons, we were introduced to a world where political deception and greed have led to a violation of the "hands off" policy of the Parliament of Dragons concerning the affairs of men. Indeed that violation threatens more than policy and order, it threatens the freedom of the human race.

In The Dragon's Son, there is new hope in the form of a special offspring who might be able to bridge the anarchy that is disrupting the delicate and unseen order that the Parliament has tried to protect. The twin offspring of a high priestess and a dragon hold the key to man's future, but their identity must be held secret, even from each other, until they have matured. One is raised in a human court, the other in hiding. But the link that exists between the twins will not be broken by mere distance, and the duality of their origin will unlock the new hope for a return to peace and safety as long as they live to maturity. It is up to Draconas, the special emissary of the Parliament, to make it happen for the sake of both Dragonkind and mankind alike, despite the evil forces that are still gaining strength around them.

What listeners say about The Dragon's Son

The first in this series Mistress of Dragons was entertaining and a good read though the characters were rather flat. I cut the first book a lot of slack because I figured I?d learn more about their true intentions in the next book. Alas, this book does not deliver the goods. Worse, the plot wanders aimlessly, as if the author was trying to meet some predetermined word count. I love fantasy and jump at the chance to download something new from Audible. My advice? Go for George R. R. Martin?s Song of Ice and Fire series.

I liked the second intstallment in this series, it was well written and did not go the way that I had expected it to go. I can't wait for the next book to come out I just hope it does not take to long to be released.

After listening to the first two books, the new narrator's style for this last volume was distractingly harsh and dissonant. I had a very hard time becoming engaged in the story or caring about the hero's success.

Make sure you start with book one.

I usually like a story with dragons and I liked this series. It was a bit different but still entertaining. Make sure you start with book one.

I loved the books ( all three ) Not for the novice but not too hard to comprehend.the only down-fall with this book is that there ar two diferent readers one male one female and I found that very anoying. other than that the story was very good.

I was so capitvated by this trilogy that I sat in my car for 30 mins to listen to the end of the book. There are so many twists and turns in this story, that when I thought I had figured out who was behind it all, I was shocked at the ending - I couldn't wait for the next part. I just downloaded the final book Master of Dragons and look forward to the end of the story. If you like a good thriller, and fantasy - this is the series for you. Hope you enjoy it as much as I did.

The problems with a sequal

This sequel constantly repeats stuff that you knew from the previous book.
This gets so monotonous you have to fast forward.
The book doesn?t really get started till chapter 12 (4 hours)
The fight scenes where not as good as the first
Only introduced three new characters. I finished the book mystified about the characters motives for their bizarre actions. The end is cut short forcing the reader to read the final book to make sense of it.

I enjoyed the first book so was looking forward to the second - what a disappointment. The characters were totally frustrating and I wanted the story to 'get on with it'. It dragged, it never got anywhere and towards the end I fast forwarded it. If someone gets the third book would you tell me what happens in the end? I don't think I could go through the whole book if it's going to be like this one.

Very good read. Good follow-up to Mistress of Dragons. Looking forward to the next one in the series.

First book was amazing; this one is better

LOOKING FORWARD TO THE NEXT BOOK

Fairly standard fantasy nothing compelling or new, sometimes far stretches to imagine a dragon using an "illusion" to be human without something more, but still good listen and worth the time spent.

This follows on from Mistress of Dragons. It follows the story of Ven and Marcus, sons of Millisand. One outwardly human, but with a dragon mind and the other physically half human half dragon. They have to come to terms with who they are and their purpose in life; particularly Ven whose full name is Vengeance.