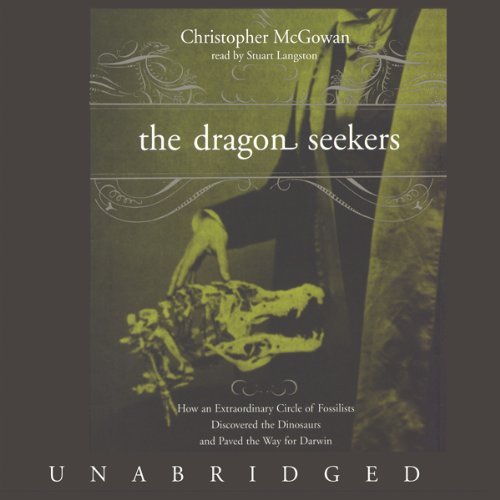 By: Christopher McGowan
Narrated by: Stuart Langton
Try for $0.00

In the midst of the Industrial Revolution, an extraordinary group of scientists struggled to make sense of a mysterious, prehistoric world - a world that they had to piece together from the fossilized, fragmentary remains of animals no one had ever seen.

These 19th-century pioneers were an eccentric lot that included a working-class woman, an Oxford professor with a theatrical bent, a crisis-ridden country doctor who was never quite accepted among London's scientific elite, and an expert anatomist who once dissected a rhino in his living room.

These were the Dragon Seekers, the people who brought the myths to life and whose work, within a populace raised on a literal interpretation of Genesis, laid the groundwork for the revolutionary ideas of Darwin.

"Langton's clear, precise, British-accented narration makes the occasionally technical information easy to absorb. He readily conveys McGowan's passionate regard for his subject and his obvious frustration with the limitations placed on the discoveries because of biblical interpretations." (Booklist)
"Stuart Langton's reading is admirably straightforward. He speaks clearly, seems comfortable with reptilian nomenclature, and tells the story in a full-speed-ahead manner." (AudioFile)

What listeners say about The Dragon Seekers

Primer for books on Darwin

This book presents the thinking & the groundwork for the period immediately before Darwin's 1859 book "On the Origin of Species". Darwin conceived his theory in 1838 but said that if he had published 20 years earlier the world wouldn't have been ready for it. The narration is excellent but even better are the short parenthetical explanations of technical terms which are slipped in as if they were a natural part of the writing.

THIS TECHNIQUE WHICH SHOULD BE USED IN ALL AUDIOBOOKS WITH A TECHNICAL BENT.

Very good listen. Infrequently dry but always engaging, this book covers a realm of the history of science that's generally left out, namely some of fascinating characters who made up the early fossilists. Highly recommended for anyone interested in science.

The title says it all. Anyone interested in this topic or this time period should find this book very interesting. What I find amazing is all that we have been able to learn about science in spite of religion and the pandering to theists in Oxford. The acknowledgements are just shy of the first twenty minutes of the story. This really should have been put at the end of the book so that it could be easily skipped over by listeners.

I really enjoyed this book. It's a great blend of history of science (and ideas) coupled with careful assessment of findings from a working paleontologist. Highly recommended for anyone who likes dinosaurs, the history of science, or 19th century intellectual history. Accessible for a public audience (although it helps if you have some vague background in 19th century Britain and/or acquaintance with marine reptiles)

Overall it was an ok book. The topic is interesting in the fact these were some of the early leaders in the field and it was starting to come of age. I got stuck in the more detailed than I needed descriptions of the various fossils. Overall I was glad I took the time to listen in.