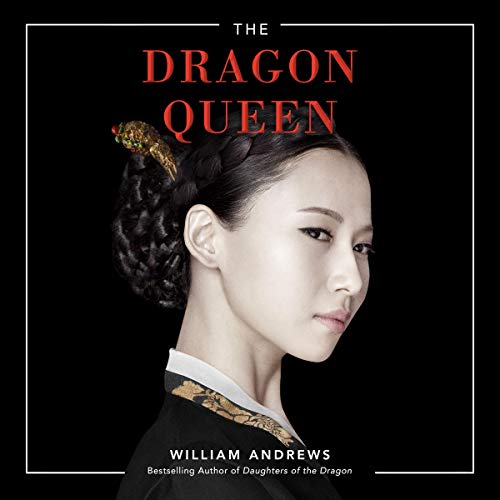 By: William Andrews
Narrated by: Janet Song,Todd McLaren
Try for $0.00

From the bestselling author of Daughters of the Dragon comes the story of one of the most extraordinary queens in history.

As tensions rise on the Korean peninsula, US diplomat Nate Simon is sent to Seoul to gauge the political situation and advise the president. He also needs to find out why someone sent the president an ancient, intricately carved comb with an ivory inlay of a two-headed dragon. Though familiar with Korea’s language and culture, Nate knows little of its troubled history. Beautiful and mysterious embassy aide Anna Carlson believes it’s time he learns, starting with the extraordinary story of Korea’s last queen.

Seoul, 1866. The beautiful orphan Ja-young is chosen to be the child bride of Gojong, Korea’s boy king. Highly intelligent but shy, Ja-young faces a choice: she can be a stone queen - silent and submissive - or she can be a dragon queen and oppose enemies and empires that try to rule Korea during the age of imperialism. Her choice leads her to forge a legend that will endure far beyond her lifetime.

The more Nate discovers, the more he comes to realize that Queen Min’s story is still relevant today. Now the choice is up to him: be submissive and accepting…or change the world.

What listeners say about The Dragon Queen

The previous book Daughters of the Dragon is much better. Several of the modern time chapters are cheesy and unlikely to happen. Narration made it bearable.

It was a good story relating the past and the present day Korean issues. Some of the writing about the present was sort of shallow.

It had me in the beginning, but mid-way through the end it got a little slow and drawn out. Not bad, but not a favorite.

I learned a lot about Korea that I had not known. it was masterfully written and presented.

Just a little put off

In general I really enjoyed this series.

If I have one criticism of the audio version of this book it is that Anna suddenly has an accent.

The story wasn't bad, and it had some interesting twists and turns, but it was nowhere as good as Daughter of the Dragon. Reading was okay, not stellar, and switching between genders wasn't smooth. Overall, ehh, shrugs*.

Janet Song is one og my favorite narrators. Todd McLaren was good enough, a little harsh at times but he had much less time so it was bearable.

it was an amazing story! A pleasure to listen to. informative as well a joy

This is a must read for anyone interested in Asian, especially Korean, history. It is a heart wrenching story and shows the unexpected twists and turns if life. It also shows he strength of character and conviction of one woman, actually two women, as a servant was equally as compell

I know almost nothing about Korea or its history. I found this book to be engrossing and informative. It was not only an enthralling story, but a learning experience about a time and place that I’d never had an opportunity to explore before. I highly recommend it!

This novel provides an interesting insight into the life of the last Korean Queen. The frame narration doesn't really need to be there, but is perhaps a good way to draw the reader into an otherwise very unfamiliar story. The historical events depicted are interesting, as is the the life of the Queen. However, the characters are fairly flat and depend on the development of the plot to make them interesting. It was a mildly entertaining listen, but no more than that.

enjoyed the story and the narration brought the story to life. I'd recommend it as engaging