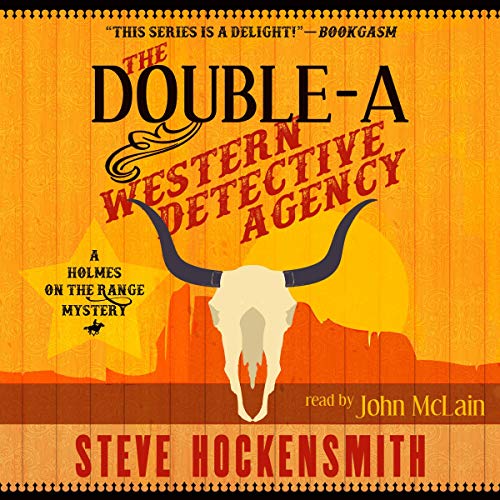 By: Steve Hockensmith
Narrated by: John McLain
Try for $0.00

Big Red and Old Red Amlingmeyer’s dream has come true: The Sherlock Holmes-worshiping cowboy brothers are finally in business as professional detectives. But their fledgling A.A. Western Detective Agency faces a few challenges. Their partner, Col. Crowe, is almost as cantankerous and secretive as Old Red himself. The colonel’s daughter, Diana, insists on tagging along for the Amlingmeyers’ first assignment. And that assignment lands them smack dab in the middle of a range war - with Big Red and Old Red expected to shoot it out with rustlers rather than rustle up clues and solve a mystery.

When the violence claims an unexpected victim, however, the Amlingmeyers are called upon to holster their guns (for a moment) and use their “Holmesifying” skills to track down the killer. But someone else is tracking them...someone who seems to set one ambush after another for the brothers. Will the Double-A Western Detective Agency’s first case also be its last?

What listeners say about The Double-A Western Detective Agency

This is a fun series and I don't want to discourage anyone from listening to it. I enjoyed the first books, but this was a little different and I didn't finish the book. It had nothing to do with the story or the two main characters. There seemed to be some odd diversity contamination to the story and near the middle of the book the people in town were being described by the color of their skin and not by individual quirks and looks - just by color. The female character didn't become the part of the team but is thought to be in the way by the brothers. So the woman is resentful and has to be in a snit all of the time - nothing new there. And then the two main characters were tricked and I could see the trick coming, and when they were fooled I stopped the book - I thought the brothers were smarter than that. I will not continue with the series.

good but not as good as the previous ones

the new narrator didn't seem to be a good voice for the story. original narrator was much better

It was another fun book. Hockensmith has a way with words. 2 problems. too much swearing; need to go back to the old narrator. Big Red was just not big enough with McLain's narration.

I've loved this series up till now. I liked this book but didn't love it. Diane really had very little action and the verbal back and forth just wasn't the best. some of this may be because the narrator was changed. big mistake. not saying this guy didn't do a good job, he did, but it wasn't the same.

So if you have a best-selling series that everyone loves and I believe you’re a former engineer living in the bay area with your family and you’re bored you get so bored that you turn down the money from the series just to change the narrator you had to be told that that was the wrong narrator who told you that ? An attorney your manager someone who gets a cut of the fees? you change the person we knew that person we were friends with that person in our books he was our hero and you changed him into a sleazy city slicker please tell me that you made a lot of money off of stupid decision I hope so for god sake‘s you have ruined your books but I guess you’re rich enough you don’t care Sounds like an inside New Yorker really?

I have eagerly awaited the return of Old Red and Big Red. this book did not disappoint. I did miss William Dupree as the narrator though.

This is fun listening and ‘deducifying’.

Big Red and Old Red Amlingmeyer have finally managed to establish their own detective agency with the help of a partner, Col. Crowe. The Double-As are big fans of Sherlock Holmes but on their own have only had limited chance to use their skills. Cantankerous Old Red provides the detecting expertise while Big Red provides the muscle, reading and support skills. Although they resisted teaming with Crowe’s daughter, Diana, she provides the charm, sophistication and calm.

Now they have secured a legitimate, paying case to help uncover cattle rustlers. They arrive in town to find a highly divided and tense situation. They walk in on a band of bullying gunmen threatening the local sheriff and innocents. Big Red and Old Red stand to help the sheriff and step right into the middle of a range war. It turns out the bullies they anger are the newly hired gunman for the man who hired the agency.

When a man is unexpectedly murdered, the fingers are pointing at the accused elder son of their employer’s opposition. But the clues and evidence are pointing to the employer’s bully. Big Red and Old Red are off the case of the alleged rustlers but hired by opposition to investigate the murder to protect of the accused.

As the two begin their investigation they get attacked, first by two mysterious strangers and then by a gentleman dandy who appears as a friend of Diana. Old Red suspects that Diana is reporting behind their back while she is frustrated that they are keeping details from her. It might sound a bit convoluted, but it makes for fun detecting and “deducifying” as Big Red states. I enjoyed the friction and banter among the brothers and Diana. I also liked the mystery and the trail of clues. This is apparently book six in a series but read fine as a standalone. I would be interested in reading/listening to more in the series. There are quotes and references to Holmes’ cases which make it more fun for mystery and Holmes’ fans.

Audio Notes: John McLain does a nice job with the narration. His voice and tone fit the rough western setting. He provides distinct voices and successfully delivers the humor in the brotherly ribbing. The narration added to my enjoyment of the story.

Source: Received Audible Credit March 2019 from the author for review. My Rating 4.25.

Hockensmith serves up loads of fun

I've been a fan of Steve Hockensmith for years, and in this new volume of his Holmes on the Range series, he delivers the goods again. Old Red and Big Red get "deducifying" and the fun begins. It's an ideal mix of Hockensmith's trademark humor and plot twists. Loved it!

I love these books. I hope there are many more to come and that the series never ends. The performance is top notch.