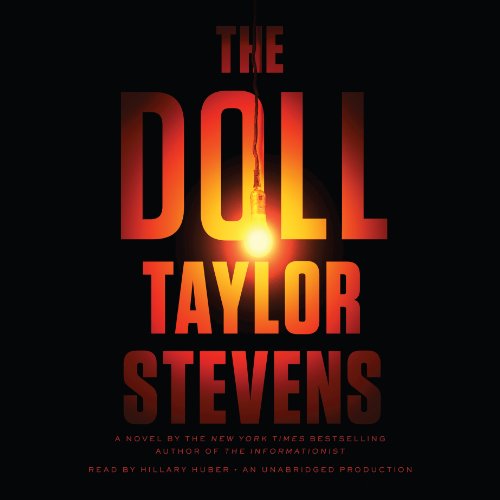 Haunted by a life of violence and as proficient with languages as she is with knives, Vanessa Michael Munroe, chameleon and hunter, has built her life on a reputation for getting things done - dangerous and often not-quite-legal things. Born to missionary parents in lawless Africa, taken under the tutelage of gunrunners, and tortured by one of the jungle’s most brutal men, Munroe was forced to do whatever it took to stay alive.

The ability to survive, fight, adapt, and blend has since taken her across the globe on behalf of corporations, heads of state, and the few private clients who can afford her unique brand of expertise, and these abilities have made her enemies.

On a busy Dallas street, Munroe is kidnapped by an unseen opponent and thrust into an underground world where women and girls are merchandise and a shadowy figure known as The Doll Maker controls her every move. While trusted friends race to unravel where she is and why she was taken, everything pivots on one simple choice: Munroe must use her unique set of skills to deliver a high-profile young woman into the same nightmare that she once endured, or condemn to torture and certain death the one person she loves above all else.

Driven by the violence that has made her what she is, cut off from help, and with attempts to escape predicted and prevented, Munroe will hunt for openings, for solutions, and a way to strike back at a man who holds all the cards. Because only one thing is certain: She cannot save everyone.

In this high-octane thriller for fans of Lee Child, Stieg Larsson, and Robert Ludlum's Bourne trilogy, Vanessa Michael Munroe will have to fight fast, smart, and furiously to overcome a dangerous nemesis and deliver her trademark brand of justice.

"Munroe is a sensational character and Stevens is a sensational writer, and together they put The Doll high on my books-of-the-year list." (Lee Child, New York Times best-selling author of the Jack Reacher series)
"Prolific linguist and exquisitely honed killer Munroe is no less effective here for still suffering from past trauma.… Stevens’ third series outing is another brisk, adrenaline-fueled adventure with a trail of bodies and a damaged protagonist who may live to kill another day." ( Library Journal)
"Stevens’ third Munroe book is another international action-adventure with a Bourne-like avenging angel at the reins." ( Booklist)

What listeners say about The Doll

Vanessa Michael Munro is not just a superb physical specimen who can fight better, run better and handle weapons better than any man, she also has brains and can speak almost every language on the planet. Of course she uses all her superb talents in this latest book on her life and deeds. It somewhat helps, but it's not necessary, to have read all Steven's books in the series to get and understanding of how all the characters in the book relate to her and neatly fit into all the layers of the story. I found this an excellent and exciting read and I'm looking forward to see what Michael gets up to in the future.

Would you listen to The Doll again? Why?

The only hesitation regarding would I read it again is that there are SO many books I want to read. I'm voracious. But this whole series is among books I might read again if I had another life which let me double my reading!

What other book might you compare The Doll to and why?

If you liked The Informationist, Stevens' first book, you will like this one a lot.

Have you listened to any of Hillary Huber’s other performances before? How does this one compare?

Huber does a great job with this series. If I were writing a suspense book, I'd want her reading it.

I appreciate the anguish and decisions the main character, Vanessa, goes through in trying to master her darker nature and overcome her deep wounds.

This book is as good as The Informationist. I felt the second one slipped just a bit, but now we're back up to a thrilling read.

Another excellent story. Wished it would have been longer with more time spent on Michael's revenge.

Only complaint I have was not understanding her female companions rationale for some of her actions near the end of the book.

First-I think Hillary Huber is a fantastic narrator for this series. She has an earthy voice and each of her male voices, who outnumber the women about 10 to 1, is distinctive and the listener is able to tell who is talking from the sound of the voice. Her tone and attitude for Michael Vanessa Munroe is perfect in pitch and the attitude she gives Michael is ideal.

I enjoyed this novel more than I did "The Innocent".and almost as much as "The Informationist" . The plot was tight, the story arc breathtaking and the character development of primary characters continues - builds nicely on what was learned in the first two novels.

If the reader hasn't read the story of Taylor Stevens life, I suggest you go to her website and read a couple of the interviews. This woman writes from her life. She knows what it is like to be an innocent young girl held captive by male nut cases. Michael Vanessa isn't Taylor Stevens, but Stevens history is used to build much of her story and the tenseness of her writing comes out with the difficult life she had as a young girl and woman.

This is a "Worth Your Credit" - I don't award a lot of 5 star ratings-it takes a pretty spectacular book to get 5 stars in my opinion. My 4 star rating is well deserved for his book. The Narrator gets 5 stars for her ability!

What made the experience of listening to The Doll the most enjoyable?

What was one of the most memorable moments of The Doll?

Liked her read very much

Pacing and action similar to her first novel

This series has gone from good to horrible. I really didn't like this book and almost stopped listening with only about an hour left which is not like me. I don't know...this was just a bad story. It was so boring and I'm really sick of Michael Munroe and Taylor Stevens' writing.

Loved it the first time a looonng time ago! Loved it the second time as well. Next listen the mask 👍🏻

Absolutely love this series. Hillary Huber is a great storyteller. I listen to audiobooks all the time and narration is extremely important to a good book. I have purchased books that are suppose to be excellent only to find the narration dull and boring and end not completing the audiobook and not purchasing others with the same narrator. Keep up the good work in this series. Keeps you wanting more.

Another wild and entertaining with badass Munroe.

If you could sum up The Doll in three words, what would they be?

What other book might you compare The Doll to and why?

Hard to compare this to other books because Munroe is so unique. But perhaps the closest are the Beatrix Rose books.

She brings emotion and depth to a character that is so different that it might be difficult to form a good picture of.

Yes, all the Vanessa Michael Munroe books are great!

Another wild and entertaining ride from Taylor Stevens. Her Munroe character is fascinating and complex: the product of a horrific childhood. Hillary Huber does a masterful job as the narrator of the Audiobook version. If you like complex, messy thrillers, I highly recommend "The Doll" and the other Munroe books and audiobooks.

Usually enjoy the intricate plot lines of the series. But this one just seemed flat a tedious. Narration was the only thing that saved it.