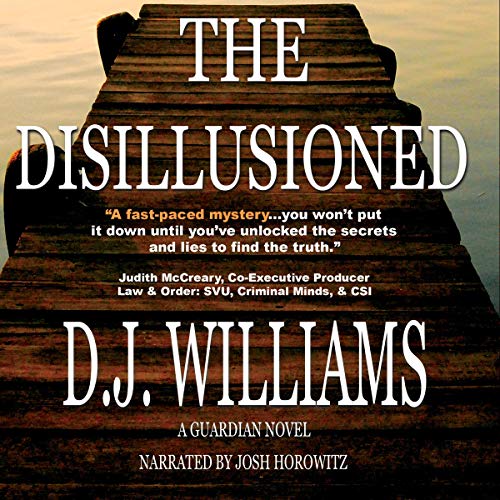 The Disillusioned has garnered praise from Hollywood's elite, such as Judith McCreary, the co-executive producer of Law & Order: SVU, Criminal Minds, and CSI, who said, "The Disillusioned is a fast-paced mystery.... You won't put it down until you've unlocked the secrets and lies to find the truth."

A mother's suicide threatens to destroy a family legacy. Her sons, Sam and Daniel, are forced to leave their comfortable worlds behind and search for a woman they believe can unlock the secrets that have remained hidden. They are propelled into separate journeys from Los Angeles to the heart of the Zambezi, where they are forced to confront a man known as Die Duiwel.

On their adventures they will find themselves in a place where death is one breath away, where thousands of children are disappearing into the darkness, and where the woman they are searching for is on the hunt for revenge. When they stand face-to-face with the forgotten slaves of Africa, they will fight to redeem what has been lost.

What listeners say about The Disillusioned

I dont know my review could give this book the justice it deserves. It is riveting from the very first paragraph. I seriously did not stop listening until the end.
It will break your heart, it will make you laugh in the most surprising places, it will give you a glimpse into the darkest depths of human rights and injustice. It will sadden you, it will anger you and it will leave you with hope and determination to find out more.
Now for a personal note to the Narrator Josh Horowitz.
Josh,
I am speechless. It was just amazing. I sat on my porch as you described Sam listening and hearing the faint sound and as you began to sing, chills ran up my arms and down my back. Tears filled my eyes as the familiar melody stuck a cord in my mind and soul. As the song ended and tears flowed freely down my cheeks my heart filled with so many emotions. What an incredible job you have done with this story! I can not imagine the emotional rolla coaster of this production you on.
You should be so very proud of this work. Your performance was stunning!
Well done my friend. Very well done!!!
Thank you for sharing!

This story really tugs at the heart stings. Sam and Daniel learn the truth about their family and the burden their mother had to carry. It has the heartwarming feeling of a family coming together and fighting for one another! This is a must listen!

This was an awesome story that delves deep into Zambia culture and problems as well as deep into the lives of the Armstrong family. I loved it! Great job, D. J. Williams!

All in all, a wonderfully written book of a harsh reality in Africa that leads to a drop in your heart then raises it to new heights.

The father figure in this story might have done well to remember the old saying, “Two can keep a secret if one of them is dead.” Since he was a world travelling minister with an ego the size of Montana, I don’t think he ever thought anyone would spill his secret. Very interesting plot with good narration.

Ok..this book grabbed my attention immediately. I drove extra miles just so I could keep listening.

The characters are so likable, Danny is just an all around GREAT GUY..his brother Sam seemed to grow and mature the more I listened. Their Mom...Oh the life she endured as a preacher's wife. There is so much to love.

Then came the horrors of things that are really happening in our world. This human trafficking is brutal and pure EVIL. I was caught off guard by the sheer brutality of this writer..but then realized..you can't really sugarcoat it.

The narration was superb...and the ending truly gave me chills! I think narrators get overlooked at times...they just MESH with the story and they are the ones that give you the FEELS in a book. Josh Horowitz really set the bar high! I cannot lie..this book had me shedding tears at times. GET THE BOOK! You won't regret it.

The story is well written. Mystery, intrigue, action this story has it all. I really enjoyed the flow of the book. It was masterfully crafted and was a pleasure to listen to. The narration, so well done, added a nice tone and pace to the story. I didn’t even realize till I reached the end that this was the first book in a series. I look forward to seeing where the story goes from here!


I received a free copy of this book in exchange for an unbiased review.

An exciting story that tugs at your conscience. Human trafficking is a terrible thing, and this book encourages listeners to do something about it. Excellent narration!!!