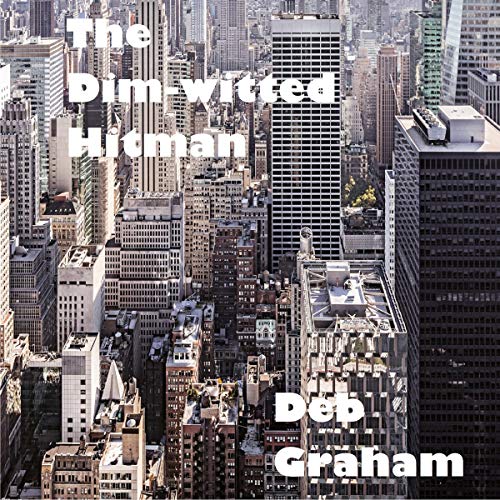 The Dim-Witted Hitman: A Cruise Crime

By: Deb Graham
Narrated by: Brian Wiggins
Try for $0.00

“Dimmie, my boy, it looks like you’re going on a luxury cruise.”

With those words, the hot-headed Irish mobster sends his best hitman to take out his old rival. He’ll never control the mob so long as Kerrick is alive.

Dimmie (short for Dim Wit) O’Malley, who has never been out of New York City, is trapped in a life he didn’t choose. With one misstep, he has a change of heart that puts his own life in danger.

A former mob boss, grieving the loss of his wife, refuses to stay in Witness Protection another day, and retires on a cruise ship. Having no idea he’s Dimmie’s next target, will his old skills save him in time? When their paths collide on a luxurious New England cruise ship, only one of them can leave the ship alive. Or will a Fate intervene?

You'll love this clean cruise ship crime story by the author of Murder on Deck, Peril in Paradise, and the best-selling Cruise Addict’s Wife series.

What listeners say about The Dim-Witted Hitman: A Cruise Crime

I was given this free review copy audiobook at my request and have voluntarily left this review. Thank you to the author for giving me the opportunity to give a review.

The book started out by jumping back and forth in time, describing how the old mob boss (Colin) and his wife ended up in witness protection. At times I had difficulty picking up the plot. The first few chapters dragged a bit, describing the loss of his wife to a prolonged illness. Colin was deep in depression and boredom/melancholy. We hear much about his dead wife and the detail about their life together. In other words; too much useless information.
I got it, he is sad, alone and has a heart of gold. It frustrated me to not know what caused his wife's death. I couldn't figure it out after I rewound two times. I experienced lots of incomplete character building, I guess it's an attempt to establish the inner turmoil of the MC’s. I wish I knew what the characters physically looked like. I wonder whether the appearances were left to the imagination for a reason? Because Colin has such a golden and righteous heart, I wish I knew how attractive he was and what Dimmie looked like. Was he sexy enough to turn a straight guy gay or not.

The third person writing created an outsider's point of view for myself and I felt disconnected and not emotionally involved with the characters. I was antagonized by the fact that this book was supposed to be humorous, but I instinctively sided with Dimmie as he is a misguided and mistreated typical mob goon. His name says it all. It was not amusing to me, but rather extremely sad. I don’t know anyone who would laugh at someone like Dimmie. I have a weird, black and sick sense of humour, but this wasn't funny. Obviously, Dimmie was sent on this errant because his boss didn’t care if he returned home safely. Dimmie was abused emotionally, mentally and physically by almost every person in his life. He doesn't sound dim-witted, but rather like someone who has been bullied and locked away until he can be used to do the new mob boss’ dirty jobs.

The narrator is new to me. He struggled to keep my attention focused on what he was saying. The audiobook details and the title insinuated an action comedy. The audio sample sounded OK, which prompted me to listen to the book. I listened to the audio at 1.25 speed. The narrator does have a beautiful voice and he does have fantastic dialogues between several people which made it easy for me to differentiate between characters. He also does tend to go on a ramble in the third person with no emotion in his voice. I found two pieces funny, it was when Colin thought: “Lord have mercy free at last” and Dimmie was singing to himself: Cha-cha go to heaven, Carrick go to heaven”.
I was intrigued by the coming cruise. Me and my proclivities. Two men; one old who lost his wife, one young and very impressionable. I really thought I was going to hear some kink to bring heat into the story. Even some vanilla Colin or Dimmie naughty times, but no. This was G-rated. No kissing. No hand holding. No blue my flame. At all.

The story was fast paced and moving along at a good pace. Lots was said, but nothing new happened until chapter 14. Hang in there, it gets better and starts to make sense. The dialogue picks up and the narrator gets better when he starts to do more dialogue between characters. We do have a cliffhanger and no HEA. It does end leaving questions creating an opening for discussions about the book and it’s ending to be continued.

The book is very light, but still entertaining to listen to, if you don't mind zero sexy times.
Happy Listening
(A Mel's Five Blue Rose review)

This story had me empathizing with and rooting for the retired mob boss and even Dimmie. I enjoyed following along to the end of the story. I voluntarily listened to a free copy of this and am giving an honest review. The narrator did a good job bringing it to life.

The man who was Boss of the Irish mob had a concience and scruples of a sort so he turned Federal evidence and was sent into WITSEC as far away from NYC as small town Kansas where his beloved best friend/wife dies from cancer. So he decides to maybe go live out his days going from cruise to cruise. The hitman is self contained and has had too many people denigrate him and has come to believe it. The current mob boss finds out that the old one is going on a cruise out of New York harbor and sends his assassin out on the cruise to do a hit on the old man. And that's verrry interesting!
Loved it
Brian Wiggins is the amazing narrator who really brought the story to life.

Excellent Book. The characters are well developed and you can develop and understanding and hope that they prevail. The narration was great and overall the book was well worth the listen!

This is a delightful well-written story, which given the subject matter - a hitman goes on a cruise to kill the former mob boss - is an odd thing to say. It is humorous and the author has created a main character who you shouldn't like but he is likeable and you will root for as he makes discoveries about the world and himself.

Dimmie is a very personable hitman. He makes humorous observations and is experiencing new adventures for the first time on his own. Dimmie is a rule follower and yet now he has to interact with people he does not know and make decisions without being guided. Because of this, Dimmie begins to grow and look at life a little differently.

The narrator did a very nice job.

A different take on the hitman

I found this to be both interesting and entertaining. I've never thought about a hitman as being dim-witted, so when I got the offer to listen to this book I was expecting more of a comedy with the misadventures of a mob hitman. It's not a comedy at all but an adventure for a hitman who was used to taking orders and not thinking about what he was doing. He takes a cruise to do a hit and learns a lot about who he is and what he wants. I was voluntarily provided this review copy audiobook at no charge by the author, publisher and/or narrator.

You want a peppermint?

James Robert O'Malley, better known to everyone as Dimmie, had never before been out of New York. But now his boss, Lucky Callahan, had him on a luxury cruise ship heading to Canada without anyone to give him orders and all the food he can eat - for free. The old boss who'd gone into witness protection years before had reportedly been seen on board and Dimmie was to find and kill him, returning to the City by Greyhound bus from Boston. Dimmie was an hit man who didn't like killing people but had to do as he was told. Armed only with a grainy picture of his victim, and the faintest of memories of him from the past, Dimmie starts looking for his man. Failure would not be tolerated

This delightful story follows the two men, Dimmie himself and the o!d crime boss, Kerrick. The reader shares their ideas, hopes and fears, over the course of the four days spent cruising, up to the final denouement in Boston. Unexpectedly charming and rather sad, the two protagonists and Dimmie in particular, become very real people and the tension rises as the book approaches it's conclusion. Narrator, Brian Wiggins, performs the book perfectly.

I was very fortunate in being freely gifted with a complimentary copy of The Dim-Witted Hitman, by the rights holder after my request via Audiobook Boom. Thank you so much. It was not as I had expected: it was better. Delightful characterisation and sweet story. Recommended to all..