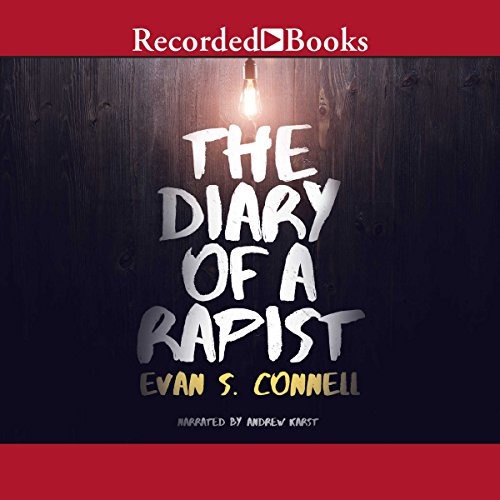 The Diary of a Rapist

The 1960s: news of riots, war, unheard-of behavior, and rampant crime crowds the papers and the airwaves. Spurned by his wife at home and by superiors at work, Earl Summerfield hunkers down in his cramped San Francisco apartment and keeps a diary that is a scratched record of a world going to pieces. The words he overhears, the words he wants to say, swim in his head, turning into fantasies of ambition, love, and retribution. He is sorry for himself. He is angry at everyone. He takes to going out at night, slipping into other people's houses. He is looking for something, and he fixes on one woman.

What listeners say about The Diary of a Rapist

The performer grasp your attention instantly. You don't lose track of the content at all. so natural that you feel he is talking about his own life.

No one has yet to write a review for this story on Audible, so thought I would help out.

This, for me, is a difficult book to review, so I will leave that to someone else, below, who did so brilliantly, in my opinion (see below review from Amazon).

What I haven't seen reviewed is the narration. Andrew Karst did an amazing job with this difficult read. As this was a one man show, all you had to listen to was "Earl Summerfield". Andrew Karst became Earl... Perfect voice for the character and handled the varied emotions spot on. I look forward to hearing more of his work, as it looks as though this may be his first?? If so, I hope he contributes more.

Here is the brilliant review, By Steven Reynoldson, copied from Amazon:

Earl Summerfield, 26, feckless junior clerk at the State Unemployment Bureau, miserably married to the loveless Bianca, 33, keeps a diary for one year. It becomes a record of marital hatred, the paranoia and pathetic rivalries of office life, and, increasingly, a record of violent crime - the rapes, robberies, senseless murders and gas chamber executions reported in the daily news.

Earl's apparent disgust and dismay at the crime wave alternates with violent sexual fantasies of his own. Fleeing Bianca and his apartment some nights, he begins sneaking into other people's houses. When he becomes fixated with the local beauty queen, Mara St Johns, it's only a matter of time before Earl's fantasies become reality. Or do they?...

I imagine many readers flee from this novel - even from the title - assuming it's some kind of exploitative or voyeuristic pornography. Far from it. It is relentlessly voyeuristic, but the object of that gaze is Earl's mind. This is a tremendously engaging novel of psychological realism, and what gives it that vivid quality is that Earl is as inconsistent as any real person. He loves himself, he's filled with self-loathing. He deserves to be promoted, he's an idiot for dreaming of it. One day he despises work, the next he can't wait to go in. One night he revels in personal insights and dreams of self-transformation, making life-changing decisions which are instantly reversed or forgotten by the next.

He's a man unravelling; caught in the trap of middle-class existence which fuels his dreams without giving him any real hope of achieving them; caught, too, between desire and the Puritan legacy for which the circuit breaker is a violent rejection and punishment of sex.

What's most compelling about Earl's diary is that the more deranged, anti-social and evangelical he becomes, the more consistent are his writing and behaviour. In the end, he lives up to his rhetoric.

Bored with this book, super fast.

Just my opinion, but this nonsense seemed the author's desire to seed how deep he could talk about nothing in general. I am disappointed in myself,, as I was deciding my next book to purchase and hit the wrong key. This is not a novel on the most degrading of all crimes, and for that I am grateful&amp;gt; There is plenty of tragic in our world, so I don't need to read more. I love a good mystery but his guy is all over the place. He goes day by day for a year, I guess trying to be a word smith, yet it is so boring. His best days are December 26th. to Dec. 31st...SPOILER ALERT....He say not a word on those days, which I found his best work.
Buyer Beware!