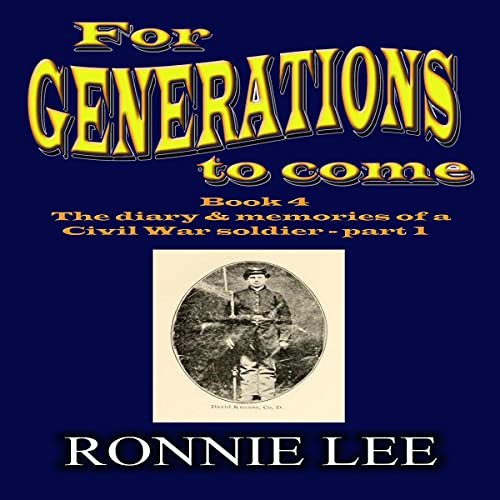 The Diary and Memories of a Civil War Soldier - Part 1

Please allow me to introduce you to, For Generations to Come, an epic historical novel of the 500-year saga that took the Knauss family from 1546 Hessian Germany to America, and the generations that followed them in the United States to the present day.

Real-life experiences and historical facts are uniquely blended. The story-line is like a Tom Sawyer/Nancy Drew book. It has action and tall tales for the boys and, at the same time, romance and mystery for the girl listeners. The novel is written like a Hitchcock film or an old 1930s murder mystery...you think you know who "has done it" until the cliff-hanger endings that are throughout the story-line.

The first three sections reveal the path taken by emigrants from Europe to the New World to becoming Americans. Sections four through 11 focus on families during and after the American Civil War. The ending and the author's life story are in sections 12 through 14.

This American story also tells the parallel Native American story. Early European settlers were driven out of their native homeland by invaders from other countries. Then they did the same thing to the Native Americans who thought the settlers were invaders and squatters on their homeland. For Generations to Come tries to encourage the listener to learn more about their personal history.

This text was initially written for school children grades eight through 12, but all ages have quickly enjoyed it. For Generations to Come covers 10 generations of the Knauss family, trusting the Lord to direct their path and keep them and their family safe. Fleeing from religious persecution and warring enemies, they left Germania and sailed to the New World.

Thank you for your time looking at my work.