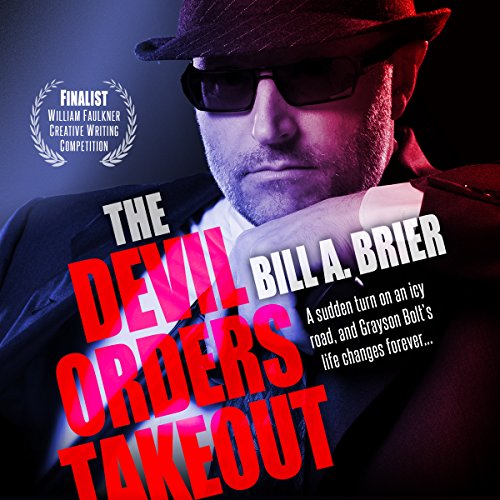 A tax attorney with integrity...a powerful mobster determined to bend his will.

Grayson Bolt isn't about to compromise his integrity to help a notorious crime boss escape the cross-hairs of the IRS. But there's a steep price to pay for defying The Man. Grayson's beloved wife and older son.

There's only one way for Grayson to prevent his younger son, Jim, an innocent golf prodigy, from also being taken out: play a dangerous game of cat and mouse. And what will Jim be forced to do when the woman he loves gets ensnarled in a web of betrayal and deceit?

What listeners say about The Devil Orders Takeout

I would not recommend this book simply because it took too long to determine what the book was about. It's like when we all thought Star Wars was about Luke Skywalker and then we realized at the end of the original trilogy that is was all about Anakin's journey. Too many changes in the story throughout. There should have been a single thread keeping the whole story together, but it didn't.

Would you be willing to try another book from Bill A. Brier? Why or why not?

I would. It's obvious Mr. Brier has a great flair for coming up with interesting stories. The paths of the characters are interesting, atypical, and mostly surprising. I would try another.

What aspect of Joe Van Riper’s performance would you have changed?

Joe has a great resonant voice, but his depiction of female characters were cartoonish and silly at times. Sometimes a straight read with a voice like his is best without trying to do voices for the characters.

Could you see The Devil Orders Takeout being made into a movie or a TV series? Who should the stars be?

It would make a better stand alone TV season than a movie, simply because of the lack of that thread I was taking about. If the thread (maybe Jim) was consistent throughout, you could build a 10-episode season out of it. Like I said earlier, the story was very creative.

I received this audiobook from the publisher/narrator in exchange for an honest review.