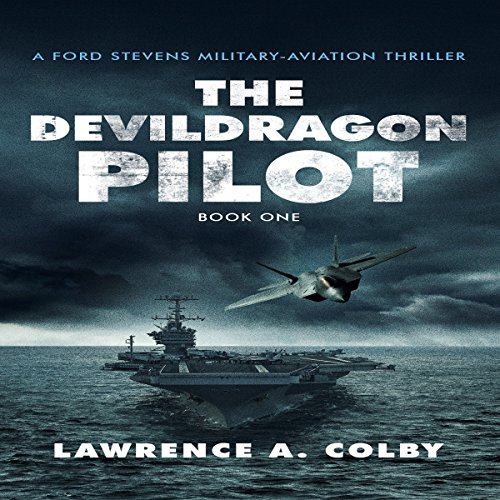 By: Lawrence Colby
Narrated by: Christopher Raab
Try for $0.00

How do you capture the fastest airplane in the world without anyone finding out?

Concealed deep within China's inland borders is one of the most secret airplanes ever flown, known as Devil Dragon. She's sleek, unbelievably fast, and mysterious - her test pilots have one mission in mind: make her test flights successful for operational use as soon as possible. Or sooner.

But when strange transmissions of pilots are recorded without an aircraft appearing on radar and bizarre cell phone signals are detected at towers hundreds of miles apart, the intelligence community team is set in motion, and US Air Force Reserve pilot Ford Stevens is asked to take on the most dangerous assignment of his life.

What begins as a friend helping a friend explodes into a globe-trotting action packed military-aviation adventure. Against an atmosphere of Washington, DC government red tape, an intimidating Chinese general, DIA leadership, and carrier aviation, all airways lead to a stunning international plot. Crammed with deceitful government employees, smoke and mirrors tradecraft, and the blackest, most secretive aviation flight ever undertaken, you will be unable to stop listening.

What listeners say about The Devil Dragon Pilot

The plot is too easy to guess the ending & the method of writing includes too many repetitive sentences, i.e. "...Ford said." "Ford said.", etc. The author would have had better language flow if they had used more transitional phrases, and modifiers. Another issue was the narrator was reading in a voice that sounded very stilted when changing from first-person voice to narrative voice. He sounded similar to "...he...ask..ed" Consequently, the narrator has a very robotic style of ending a sentence spoken by a character in the story. This book may have been a better purchase had it been read by a more fluid narrator or written with a more flowing style, i.e. Tom Clancy style of writing.

OUCH! This was a hard one to get through.

Narrator wasn't as into it as much have as he could have been. He sounded like he was reading a restaurant menu and why did he have to chuckle whenever he spoke. Sounds like it was narrated by Katherine Hepburn. The story lacked fluidity and was somewhat disjointed. It's not bad, but could have been more enjoyable. The story seems as though someone gathered a bunch of tech info and tried to find a way to work it into a book. I appreciate the time it took write. I'm not an author and couldn't be one of I tried, but I know a weak story. This one lacked an real feel for plausibility or reality. It had too much filler and not enough plot depth. The characters were superficial with shallow dialog. It is a story written by someone that the depth of knowledge about his subject matter. I will listen to this authors next offering. I just hope that he is able to grow the characters and pay more attention to the story cohesiveness.

Firefox for the 21st century

Good story if not made to sound a little simple! My only criticism is I’m really not a fan of sound effects in audiobooks.

The writing style as someone else mentioned is a bit on the elementary side. The story plot is quite interesting, but the narration just ruins the book. I haven't been able to finish it. Maybe I'll try the hard copy and see if I can finish it.

Excellent book to listen to.

What a great book. There was mystery romance and a total thrill to read. Kept me on the edge of my seat during the entire book.
Recommend it highly

Plot line had some promise but I couldn't get past the narration. Probably the worst I've heard. At some points I thought my 9 year old was reading the book to me, his narration was so bad. Also his Asian accents were a joke.They weren't really accents but just slower reading. Quit 1/3 of the way into the book.

Quite an enjoyable listen

In reading some previous (negative) reviews, it's hard for me to get my head around just what's not to like about this book. I found it to be one of the most enjoyable listens I've downloaded in the last couple of years. I've read probably 200+ books in the espionage / technothriller genre in my lifetime, and this one ranks among the best. Many people commented about the narrator, who I found to be highly skilled, so much so that as I was reading, I thought I would specifically search out other books by this narrator, which is not usually something I focus on. He was able to deftly portray a large cast of characters, male and female, American and Chinese, all with clear distinguishing characteristics, even to the extent of differentiating the "thickness" of Mandarin accent from character to character based on the portrayed English proficiency of the character. I suspect those who rated this narrator negatively are responding not to the quality of the narration itself, but more likely to the harshness of the Mandarin accent, which is admittedly not the most mellifluous dialect spoken on Earth. I also thought the storyline was great, with lots of credible details. Granted, I am a cybersecurity specialist for a major airline, so this checks a lot of my boxes in terms of interest, but if you're looking for an enjoyable, engaging technothriller, this one is a winner!

Fantastic book, very detailed and thorough on the technical details of the aircraft and inner workings of the Defense Intelligence Agency. Superb writing. Great story. It was so interesting, I had to get it on audible so I had more time to enjoy the story. Nicely done!

Other than the few inaccuracies I caught. This book gained intensity down the home stretch. listened to the last half of the book in a day.
v-22 is built by bell not Boeing

outstanding story and enjoyable listening to the audio version. This story is easy to follow and relate to.