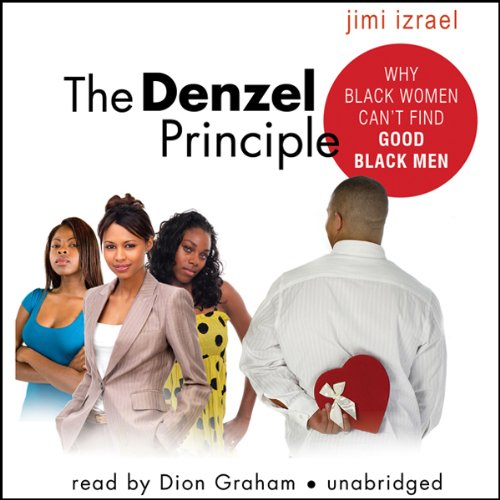 By: Jimi Izrael
Narrated by: Dion Graham
Try for $0.00

The Denzel Principle, also called "The Dizzle," according to journalist and author Jimi Izrael, is the belief that the perfect man, who is the epitome of all things women think Denzel Washington represents, exists off screen and not only can you get one for your very own, you also need not settle for less. The regular good man need not apply.

Qualities of The Dizzle, aka Mr. Perfect: He's rich but earthy, handsome but not pretty, doting but not docile, polite but not deferential, tough but vulnerable, political but not radical, passionate but not hysterical, ambitious but not overbearing, evil but not beyond redemption, well-read but not nerdy, street-wise but not thuggish-ruggish, thug certified but not criminal minded, accessible but not transparent, mannish but not macho, gentle but not feminine, black but not militant, conscious but not pedantic, intuitive but not overly philosophical, sexy but not solicitous, flirtatious but particular—and all these things on cue and in proper measure.

"Sisters decry the shortage of good men and say there is no way she is settling for less than a good black man. Not just a good one, but the BEST one: The Dizzle. She, of course, has no idea what that means, what she wants, or what a good black man truly looks like."

The Denzel Principle gives straight-talking advice to women on how to break this cycle, including "Ways Women Can Break the Hold of the Dizzle," "Ways to Attract Mr. Right,” and "Ten Reasons to Love Ordinary Black Men."

The Denzel Principle is funny, in your face, and irreverent and is guaranteed to strike a chord—and most likely a nerve—with black women everywhere.

The Denzel Principle is funny, in your face, and irreverent and is guaranteed to strike a chord—and most likely a nerve—with black women everywhere.
"Sisters decry the shortage of good men and say there is no way she is settling for less than a good Black man. Not just a good one, but the BEST one: The Dizzle. She, of course, has no idea what that means, what she wants or what a good Black man truly looks like."—from the book

What listeners say about The Denzel Principle

Both black men and women listen to this once

Started off really strong I can relate, albeit I didn't agree with everything and a bit of the second part was arduous. I enjoyed this book and will give it a few more spins

So So So Very Entertaining

This is an amazingly entertaining and surprising listen. That is, if you approach it properly. If you are in a serious frame of mind and looking for the answers to the deep questions life may bring up, you should maybe pass. If, on the other hand, you are open, and willing to let surprising pearls of wisdom drop into your lap while laughing yourself silly and learning a little about life, the world, men, women and relationships, I strongly recommend this book. The narration is flawless!! I thoroughly enjoyed it and laughed during and long after I was through listening. More memoir and personal opinion than self help. More funny and ironic than serious. But there are some very touching and moving moments also. Delightful. Totally delightful, and again, superbly and perfectly narrated! Bravo!

If you're open minded as a woman and OK with looking at yourself in a different light that may be hindering you from being successful with finding a Mate. This book is well written by an obviously educated African American man and comically narrated. Great read will definitely be giving it a second or 3rd go round . A reader must be open to a different interpretation of dating dilemma as to like this book.

his opinion, not mine

This book is all about the author's opinion on a number of topics. I was disappointed because I was looking for a story, not chapter after chapter of someone's opinion.