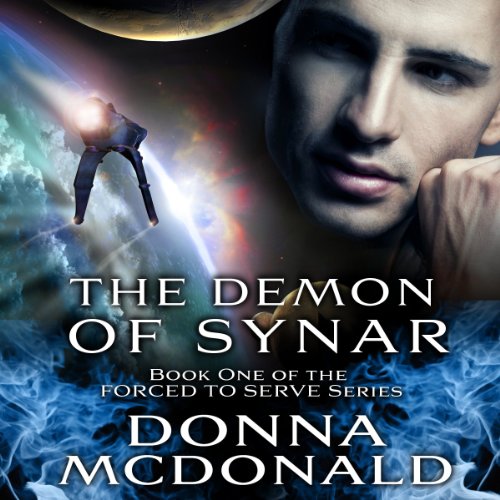 The Demon Of Synar

By: Donna McDonald
Narrated by: Allyson Johnson
Try for $0.00

Being captain of his own rescue ship is the life Liam Synar has always dreamed of living. Being master of a hereditary demon is not. Coveting Malachi's power, his exiled evil brother hunts him to capture the demon that Liam's life mate unknowingly hosts. Putting Malachi inside Ania two years ago had been an act to save her when she almost died saving him. If only the demon hadn't killed again.

What listeners say about The Demon Of Synar

I read the other (very positive) reviews and decided to give this book a try. However, I feel it necessary to say that it's more of a series introduction than a story in and of itself. While it introduces you to the five main characters, and lays out past events that have brought our characters to the point where they are "today", it doesn't have a resolution in the end.

This 5 hour audio book quite thoroughly introduces each character and gives you some time in each ones head. It is very character driven, and the characters do make real mistakes, but when trying to think of a synopsis of this book, I realize that I could pretty much reveal the whole book in a brief synopsis, so I will decline from doing that. Instead, I will merely reiterate that while this is a good "set up" novella for a future series, it's not in and of itself a satisfying romantic read with a tidy HEA.

I did enjoy Allyson Johnson's narration. There were some odd pauses at the beginning, though that's probably more an editing issue. Her narrating voice was pleasant, her character voices, particularly that of Malachai (the demon), were excellent, and her inflection and pacing fit the events going on in the story.

Wasn't sure what to expect from a romance novel with the word 'demon' in the title, but I listened to it anyway.I was pleasantly surprised. The story line is interesting and I love that the listener get a glimpse inside the minds of the main characters. I felt completely drawn into the story. The characters are well rounded and easily relatable. I laughed out loud several times. I also fell in love with Dorian Zade. Currently reading the 4th installment in the Series - that's how much I love it! :)

What was one of the most memorable moments of The Demon Of Synar?

This story certainly exceeded my expectations, and I was surprised on how much I really did enjoy it.

While this is not a complete story and kind of ends of a cliffhanger, it does have plenty of world and character development and will leave you wanting more.

The storyline is entertaining and different, and I really felt myself being drawn into the story so much I actually downloaded the next story in the series.

Yes, I would as it is a good story

I love the story line and it kept me entertained throughout.

Have you listened to any of Allyson Johnson’s other performances before? How does this one compare?

I enjoyed the whole book

What did you love best about The Demon Of Synar?

I love reading Sci-Fi and Demon of Synar does not let you down. It has just enough twists to keep you guessing! I absolutely love the development of one of the main characters, Ania. I have enjoyed her evolving into such a strong character that I want to see how she manages to live her new life!

Ania! She was a warrior, who spent so much time to become a peace maker, and then to be thrown back into the warrior scene, makes me want to read the rest of the series to see how Donna McDonald finishes her cycle in life!

Malachi! When Allyson performed his voice, it gave me chills, which is exactly what I envisioned when I read the book!

I look forward to the rest of the series by Donna McDonald! I also enjoyed the narrator's voice.

I had already read this book -- and loved it -- when I found out that the author had released an audio version. I tend to be a bit skittish about audiobooks for two reasons: 1) a bad reader can really destroy an otherwise wonderful story and 2) I get my own idea of the characters voices in my head and it's not always easy to jibe those voices with an audio version. But I decided to give it a shot -- after all, the book was already a great read.

I'm really thrilled to announce that the audio version of The Demon of Synar is so worth the download and the listen that I've been recommending it all over.

The Demon of Synar brings together the worlds of Science Fiction/Space Opera, Paranormal, and Romance into a brilliant story. Dark and action packed, this story is a tight, character driven story of Liam Synar on the day of his "wedding" to Ambassador Ania Looren. But an assassination plot thwarts the wedding and leaves several killed and Ania fatally wounded. Liam, unknown to any but the reader, is a Demon Master who has the power of the family demon, Malachi. Without her knowing, Liam commands Malachi into Ania to heal her and keep her alive -- and then disappears, leaving his new mate to deal with her feelings of rejection. There are reasons why, but she is not to know them. And thus begins the story.

There's a lot of action as Liam has to rescue his mate, dodge the assassination attempts, and hopefully get his crew together. And what a varied crew it is. McDonald excels in creating very real characters from other worlds and making you believe that they really exist. They're full of flaws, shining moments, bravery, and just being who they are. Each character has his or her own personality and you get caught up in the story and in their lives.

Right from the first chapter, this story takes off and it doesn't stop. The action is amazing, the plot draws you in and doesn't let go -- and the cliffhangers make you want to read the next book. And then the next. And then the next. And darn it, the woman doesn't write fast enough for me; I'm so hooked, I want more and I want it now.

And now, the icing on the cake is having an audio version. Allyson Johnson's reading is spot on! She has such a great take on each of the characters -- especially Malachi, the titled Demon of Synar -- and she gives voice to a complex character that is much more than he originally seems. She keeps things moving with her reading, which is a plus. I really hope she's reading the rest of the books in this series, because I don't think anyone else could do as well as she does with them.

Five out of five stars across the board.

Well narrated, but this is just an introduction of the world, characters and history. This seems to just set the stage for the rest of the series with no HEA and TBC ending instead.

Wonder what would happen if main characters talked

Okay, not to give too much away.
Eldest brother gone off the rails, not fit to carry the family legacy.
Brother attempted kidnapping of younger brother on Mating Day, results in new mate almost dying.
Drastic measures taken to save her, but in doing so, causes a problem between couple.
Now we experience the outcome of these events.

The demon of synar

I really hate cliffhanger endings! It is a good story but it ended so fast.

Wonderful start to this series!

Would you consider the audio edition of The Demon Of Synar to be better than the print version?

Both the audio and print versions of this book are great. I loved being able to switch back and forth between them. It's awesome being able to continue listening to my books when I'm traveling!

What was one of the most memorable moments of The Demon Of Synar?

When the Demon was summoned for the first time and we heard Allyson Johnson's voice for him. It was great, I turned up the volume in my car! It was like being in the movies, except I was sitting in traffic!

I really enjoyed the back and forth banter between Gwen and Ania. Allyson Johnson did an awesome job with both female's voices, you really feel like you're listening to two people joke around with each other.

What you see is not what you get.

I know it's important to a lot of readers to know when a book is not a complete story. This story is continued in the next book in the series, which is equally awesome so far!