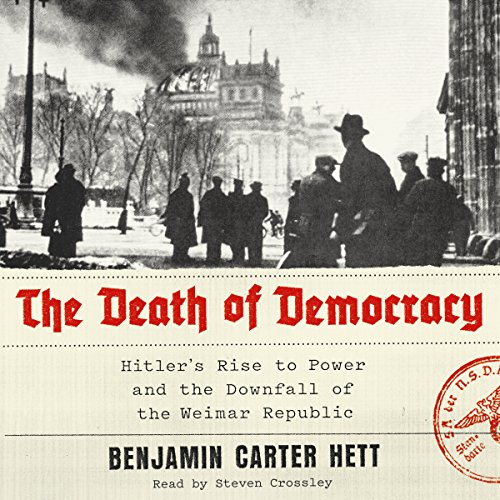 The Death of Democracy

Hitler's Rise to Power and the Downfall of the Weimar Republic
By: Benjamin Carter Hett
Narrated by: Steven Crossley
Length: 11 hrs and 25 mins
Categories: History, Europe
4.5 out of 5 stars 4.6 (306 ratings)

The Death of Democracy

By: Benjamin Carter Hett
Narrated by: Steven Crossley
Free with a 30-day trial

The Death of Democracy is a riveting audiobook account of how the Nazi Party came to power, and how the failures of the Weimar Republic and the shortsightedness of German politicians allowed it to happen.

Why did democracy fall apart so quickly and completely in Germany in the 1930s? How did a democratic government allow Adolf Hitler to seize power? In this dramatic audiobook, Benjamin Carter Hett answers these questions, and the story he tells has disturbing resonances for our own time.

To say that Hitler was elected is too simple. From the late 1920s, the Weimar Republic’s very political success sparked insurgencies against it, of which the most dangerous was the populist anti-globalization movement led by Hitler. But as Hett shows, Hitler would never have come to power if Germany’s leading politicians had not tried to coopt him, a strategy that backed them into a corner from which the only way out was to bring the Nazis in. Hett lays bare the misguided confidence of conservative politicians who believed that Hitler and his followers would willingly support them, not recognizing that their efforts to use the Nazis actually played into Hitler’s hands. They had willingly given him the tools to turn Germany into a vicious dictatorship.

Benjamin Carter Hett is one of America’s leading scholars of 20th-century Germany and a gifted storyteller whose portraits of these feckless politicians show how fragile democracy can be when those in power do not respect it. He offers a powerful lesson for today, when democracy once again finds itself embattled and the siren song of strongmen sounds ever louder.

"[Narrator Steven Crossley's] British accent gives his narration an academic-sounding quality fitting for the text. He is clear and precise in pronunciation and enunciation and is suitably expressive throughout." (AudioFile Magazine)

What listeners say about The Death of Democracy

I get jaded at times when I try a multi-starred book and find it less appealing than I would like. This book is a gem on the three ratings. If your interest in Hitler and his rise, his eventual stranglehold on the Republic, its political parties, the church, and the media. Ultimately Hitler had the German people in his fist. and his organization bent to his will. There are many analogs to contemporary politics, and a careful reader will spot them. I bought the Kindle book so that I could identify sections in the recordings that struck my interest.
'

Too Close for Comfort

Incredible history and a warning for anyone paying attention. A must read. Well done
great

For the first time in the many books I've been through on ww2, an author was able to provide enough context for each major event in fall of the Weimar Republic that I could grasp the parallels to today in ways I've never imagined.

I can't trust the author's account of these events

I was searching for a historical description of how Weimar came about and how it fell, resulting in the rise of National Socialism. A few minutes into the book, the author claims that Hitler wanted to "Make Germany Great Again", which perked up my ears that this was probably a partisan book. I am of the opinion that I can learn from partisans without buying their propaganda so I have continued to listen. Unfortunately it wasn't the case that this is being directly compared to the current political atmosphere, it is more subtle than that. More about how I figured that out below.

The book itself delves in great detail into trivial conversations and personalities involved to the point where it is easy to lose the plot: How did Democracy die? I searched the internet for this book to see if others could help me understand the answer and found an interview done by the author right after the book was published. The abject partisanship and outright lies that the author puts forth in that interview now make me question his credibility to the point where I can't accept any of his conclusions in the book because they appear to be shaped by the author's view of what is happening today instead of the view of what happened then.

For example, in this interview the author claims that there is no agreed-upon definition of fascist, so he wouldn't necessarily call Trump a fascist, (thereby implicitly calling him a fascist) but calls Trump a "wannabe authoritarian". A historian. Who claims that we can't define Fascism. That was a big red flag for me.

He also repeats this trope: "His instincts are highly authoritarian as manifested in the bromances he has with mass-murdering dictators around the world. He unfailingly loves foreign leaders who are brutal dictators, and doesn’t like democratic leaders. How could you like Putin and Duterte and not like Justin Trudeau. That is somebody who has an inverted and un-American set of values."

Fortunately in our current world you can look up what Trump has said about Putin and he never says that he loves him. In a quote after a press conference with Putin, reported in the worst possible light by CNN, he says this about Putin: "Well actually, I called him a competitor. And a good competitor he is. And I think the word 'competitor' is a compliment." This is the level of partisanship we are talking about here. This is not simply partisanship, it is taking every available statement and casting it in the worst possible light. We are used to hearing that by now from our politicians and journalists but it has sunk to the level of historians. It has been said that history is written by the winners but in our current world it is being paradoxically written by the losers. This is one of the authors of that alternative history. Take a look at his Twitter feed and you will see the state of the man.

CONCLUSION: I CAN'T TRUST THE AUTHOR
Given this demonstration of partisanship in modern politics I can't trust that the author is giving me a balanced picture of what happened in this historical event. I noticed other signs of this happening in the text. For example, he barely glosses over the invasion of Germany and occupation of the Ruhr by France and Belgium in 1923, mentioning it only in the context that it was finished when Hitler was coming to power so didn't help him. As a layman something tells me that it may have had much more to do with the feeling that Germany was being unfairly oppressed by outside forces and may have contributed the the rise.

He also claims that the Social Democrats were the defenders of Democracy but never mentions that they were big supporters of the paramilitary Freikorps, which used political violence to crush the Communist uprising in 1918.

If you are part of the #resistance and are looking for direct parallels between what is happening today and what happened then, I am afraid you may be disappointed. From my reading the closest you will get is the idea that Lindsay Graham and Mitch McConnell are somehow to be compared to Hindenburg and Schleicher. It's a weak argument but the best you will find here. You'll have a hard time finding Trump=Hitler ammo here. Within a few weeks of coming to power Hitler essentially dissolved the Reichstag (equivalent of our Congress) and gave all legislative power to himself in the Executive branch through the Enabling Act of 1933. Three years later and Trump has done nothing even approaching this.

Vivid and fascinating account of history. Dismal command of German language by narrator.

This is an extremely informative audiobook and makes learning about history a joy. Unfortunately the narrator Steven Crossley is not in command of the German language and the German words, names and terms sprinkled throughout the book don’t even remotely resemble the German language. For a German native speaker like myself this puts a damper on the joy derived from the otherwise very engaging reading.

Everyone who is concerned about what is happening in The United States today and everyone who thinks it can't happen here needs to listen to this!

A True Deep Dive ... for Better or Worse

I’ll be honest — this was a bit difficult to get through. I knew it would be a deep dive on the circumstances leading up to WW2, but there was a bit more info than I needed as a non-historian. The parts of the story we all know were really interesting, and the added detail was illuminating, but there’s a lot of story that doesn’t get commonly discussed, probably because it is of interest only to the hardcore scholars of history. I don’t want to fault this book for being in-depth, but I would have probably enjoyed an abridged version much more.

I found this book to be a challenge and lesson. In the Trump era we need to resist the irrationality and blind hatred of Trump supporters. There can be no compromises to the anti-intellectualism and the irrationality
of the right. Trump stands for nothing but vague ideas and incoherence and the slogans he spouts. It is no use to argue with his supporters because they have no will to see another viewpoint. To them, Trump is their savior, a gift from God, and sometimes they say he is the Messiah. Who can argue with a god. There are so many parallels to interwar years Germany. I recommend this book to everyone who is interested in protecting and defending the Constitution.

excellent narrative about the fall of Weimar

This book provides an excellent narrative of the fall of Weimar and the rise of the Nazi's. Even though I knew a good deal of the "outlines" of the story before reading (listening) to this book, I learned much about the persons, personalities, political parties and political machinations of the 1920s (especially the late-1920s) and the early 1930s. The book is dense in parts, the highly interested reader might benefit from having a copy of the book itself alongside the MP3 player to help his or her way through those sections. I did not have that, so I found it very useful at times to stop to research a person or incident on my iPhone or computer browser to get my bearings. This is not meant as a criticism of the book however. The narrator was good. I highly recommend the book.

Eerily familiar to todays political climate in US

If you are a voting age, you need to read this book. It demonstrates how a political party can be hijacked and used to put forth the agenda of an entirely different ideology. For those who think this cannot happen today, think again, read this book, read about how it happened in history and how one of the world's Darkest Hours unfolded.