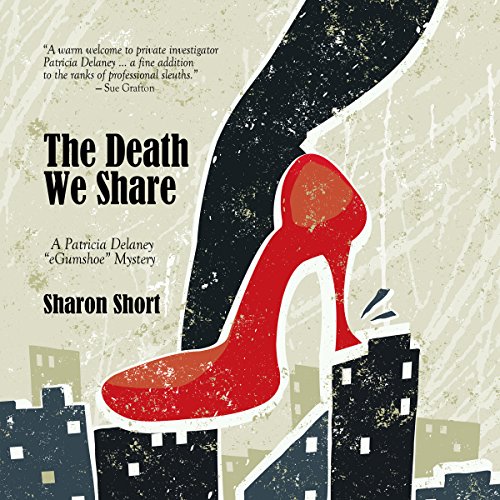 When a sleazy TV program threatens to tell all about retired opera superstar Carlotta Moses - and the child she allegedly abandoned years ago - the singer's protective family engages investigator Patricia Delaney to find out who originated this whopper and buy them off. But is this tabloid tale possibly true? As Patricia plunges into a violent, heart-wrenching search for the facts, she faces an even uglier possibility. For within the mystery of Carlotta Moses's dark past lurks a chilling, infinitely more deadly secret.

When Patricia Delaney debuted in 1994, she was a cutting-edge, first-of-her-kind eGumshoe. Now, the reprinted editions (from Cornerstone Communications), with updates to reflect their times, of the Patricia Delaney eGumshoe mysteries still resonate with timeless humanity and passion, while providing a look back at the 1990s, when technology began to change forever how private investigators worked.

A most unusual private eye

The Death We Share by Sharon Short is third in the Patricia Delaney 'eGumshoe' mystery series. It is a well-written mystery. The author keeps the pages turning with twists and turns to the plot and a good concoction of characters, setting, and conflict. The characters are evocative and realistic. If you like female sleuths, this is a book you won't want to miss. The narrator, Michelle Babb, does a nice job of giving characters their unique voice, making for an enjoyable listening experience.

Although this book is from the 1990's it really doesn't show its age & it doesn't feel outdated at all. So don't let that deter you! It's all very relatable & feels like it could realistically take place today.

The beginning was a little hard to follow for me, as it jumped around from many different characters perspectives. However at the time you have no idea who the characters are. You know their name but not how they fit into the overall story. So, that makes it hard to keep up. I had to go back and re listen to segments and write down names to have it make sense. Once the different story lines came together and the main players were laid out it got much easier to understand.

Once the story gets going there is a lot going on & it kept me guessing the whole time. Each chapter unwrapped more clues, but I still didn't see most of the revelations coming. I love writing like this which pulls you in & leaves you stumped as to whodunnit & why. Michelle Babb does a great job of narrating this story & giving different voices to the characters. It was an enjoyable listen!

I was given this book for free in exchange for my honest review.

My first Sharon Short book, and that was a good first meeting. Not perfect, but a close 4,3 out of 5. It feels so outdated to have a book where internett is a "big" thing. So maybe it felt a bit "old, but i liked the book, i am a bit surprised by the quality of the book! Sharon Short writhes fantastic when she wants to, and i feel like she could maybe just could give us something else when it comes to the ending.

Michelle Babb is good as always. Maybe the highlight of the book is the Michelle Babb reading of it. There is something when the narration is lifting UP this book, and Michelle Babb does that. She makes me wish for more!

I got this for free for my honest review, and that is what this was: Honest!

What made the experience of listening to The Death We Share the most enjoyable?

All the different family how they stuck together to protect their own.

Yes, this is a must listen to, you never know when the plot changes.

She is once again awesome, her voice is different in each story, she never sounds the same.

Yes once I started listen I was glued to my seat.

This is a very good mystery, it's a must listen to! !!

When retired opera singer Carlotta Moses becomes the target of a sleazy tabloid tv show, Patricia Delaney is the person to find out who in the singer's past wants to trash her reputation.

Someone is claiming Carlotta Moses had a son, and gave him up when he was four years old. Carlotta says she was unable to have children because of a medical condition. She also has an adopted son, a husband who is devoted to her, a granddaughter. Patricia investigates the tabloid show host, and, of course, Carlotta. Who knew Carlotta at the time she would have had this son, and can either confirm she wasn't pregnant, or would have a reason to try to harm her now?

Meanwhile, just when she needs to concentrate on this case, Patricia's father turns up on her doorstep. He's a violinist who never made a go of it professionally, and made his career elsewhere. He's got a huge crush on Carlotta Moses. He'd like to protect his daughter, to a degree that isn't possible for an adult, much less one making her living as a detective. And he has shown up so suddenly because he has suddenly left her mother, Margaret, with whom his relationship, in the eyes of their children, has always seemed perfect.

Patricia is juggling family problems and a major, complicated case simultaneously. Carlotta proves to be a difficult client, with some unexpectedly nasty secrets in her past. The tabloid show host is also not a nice guy, and he has nastier friends.

It's good, well-developed story that "plays fair" in that all the clues are there, if you pay attention, but with enough complications that you may not put them together before Patricia does. It's tightly plotted, and the characters are interesting. The world around Patricia is developed with enough texture and depth that I never had moments of, for instance, wondering where the cell phones were. This was, as with the web, just before cell phones were going to be everywhere, and smartphones were not yet a gleam in their developers' eyes.

I received a free copy of this audiobook from the narrator, and am reviewing it voluntarily.

I listened to the audio version of this book.
This was a delightful mystery involving Patricia Delaney, a private investigator. She has her hands full with a mystery involving a now reclusive famous singer and the secrets involving the secrets of her family. There are so many tangles in this story that it was hard to figure it out till the very end!
The narrator's voice is perfect for a mystery!

An interesting book set in the 90's when technology was starting up big, and how a PI used it in her investigators. It took a bit to get started, but kept you guessing at all the clues being uncovered.


The narration was well done, The characters were excellently portrayed, Michelle Babb is great.

A gentle man and he could sing

Patricia Delaney, an 'investigative consultant' is consulted and retained to look into the forthcoming exposure of an unsavoury incident in the past life of one time opera singer diva, Carlotta Moses. An incident that the family deny is true. The cheap T.V.revelation program claims that, before she became famous, Carlotta had an illegitimate son who she gave away when he was four in order to facilitate her career. Although the singer was now retired and reclusive, the wealth family into which she had married feared for reputation as well as that of the family's.
Who hated Carlotta enough to.go to the gutter press with such a story? Can Patricia stop the broadcast? And, just possibly, is the story actually true?

Although rather slow to start, the book soon fills with increasingly bizarre background characters as Patricia utilizes the new research tool - the computer and internet - which was just becoming more widely available (in the 1990s) and tries to make sense of the revealed family history. Add in the surprise visit from her father, and opera fan who had loved Carlotta from her very first public appearances and is in the throes of an emotional life crisis, and the story builds into a bubbling cauldron of personality clash and disorder.

It is difficult now to imagine the shame and stigma that illegitimacy carried a mere half century ago and the lengths people went to in order to hide pregnancy out of wedlock, so the basic premise is not too far fetched. That everyone seems as mad as a bag of monkies, however, really does seem a step too far, though it makes for fascinating reading. Altogether good, crazy fun and a tale which kept this reader guessing to the end. All cleverly assisted by Michelle Babb, whose gently accented voice carried the narration with clear understanding, good intonation and separate character voicing..She must also be acclaimed for her excellent, too brief, singing, part way through the story.

My thanks to the rights holder of The Death We Share, who freely gifted me with a complimentary copy at my request. Who could resist such an eye catching cover? The book was a good listen, it a little sad in places, contemplating the harm family members can bring to each other, with an interesting mystery knot to unpick. Recommended for fans of more quirky P.I.stories.