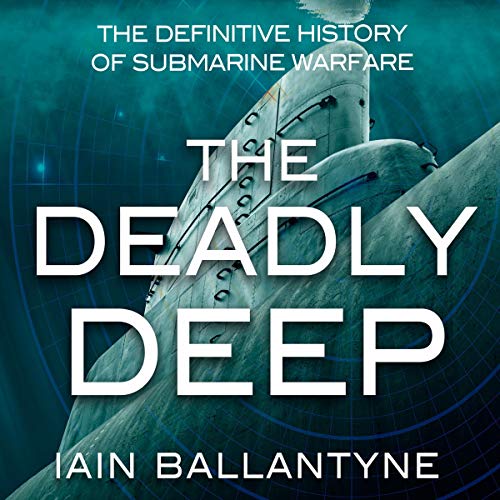 By: Iain Ballantyne
Narrated by: Paul Ansdell
Try for $0.00

This fascinating and comprehensive account reveals how an initially ineffectual underwater boat - originally derided and loathed in equal measure - evolved into the most powerful and terrifying vessel ever invented - with enough destructive power to end all life on Earth.

Iain Ballantyne considers the key episodes of submarine warfare and vividly describes the stories of brave individuals who have risked their lives under the sea, often with fatal consequences. His analysis of underwater conflict begins with Archimedes discovering the principle of buoyancy. This clandestine narrative then moves through the centuries and focuses on prolific characters with deadly motives, including David Bushnell, an American who devised the first combat submarine with the idea of attacking the British in 1775.

Today, nuclear-powered submarines are among the most complex, costly ships in existence. Armed with nuclear weapons, they have the ability to destroy millions of lives: They are the most powerful warships ever created. At the heart of this thrilling narrative lurks danger and power as we discover warfare's murkiest secrets.

What listeners say about The Deadly Deep

Overall the book focusses heavily on the 2 world wars and pre ww1 history of the submarine. post ww2, there is very little discussed. Based on other books I've read on the subject the author could have had another 5 hours at least of content on the cold war. Generally skipped over US Submarine exploits during WW2, with the exception of some highlights, but missed significant accounts found in other books.

The narrator was brilliant for most of the book, however he kept pronouncing "Leyte Gulf" as "Late Gulf". It was horribly distracting. Pronounced the city of Mobile, Alabama like "Mobile Home".

I thought I knew the history of submarines and underwater warfare. This account is remarkable, both in length but also in depth and insight. You will walk away trying to invent a time machine, to return to those times when both men and boats were made of steel. The narrator is superb. I really cannot find a flaw, and personally like the length of the program, which is filled with detail. Felt like I was there, appreciating both submarine and anti-submarine warfare. Also, I had no idea WWI submarines were so advanced and had penetrated so many theaters.

Did not realize that this book was primarily based on the British Efforts in Submarine Operations. Would have skipped it if that had been recognized before I bought the book!

Not the same old tales

The content is excellent with stories unfamiliar. The reader mispronounced many words, particularly place names.

Not For the Unlearned Reader

This book is an exacting, detailed account of submarine warfare written with great precision by the wonderful writer Iain Ballantyne. His writing is clear, concise, and his knowledge on this subject is of the highest expertise. So for someone who knows little to nothing about submarine warfare for the past 250 years, it is easy to get lost immediately in the vastness of the subject. And once lost you can never find a footing again.

Too, this book is basically three separate books in one, maybe four. That is how much time is spent on each specific time period, namely the First and second WW and the Cold War. Paul Ansdell is a perfect narrator for this book. But this is not for a casual reader or someone who thinks it might be fun to hear about submarines. Know the subject before diving in.

not as exciting as I expected. but overall a great education on submarines and the history there of

A fabulously detailed history with great stories based on primary sources. The battle for the atlsntic in WW I was unknown to me beyond a few bits and until I read this book.

a little slow but through history of submarines.

Had to laugh at pronunciation of the American Civil War battles early in the book. I had no clue what he was talking about until I listened to it 2 or 3 times.

overall good book, however dry. I would have liked to understand 2019 submarine technology better. However I know way more that I did before