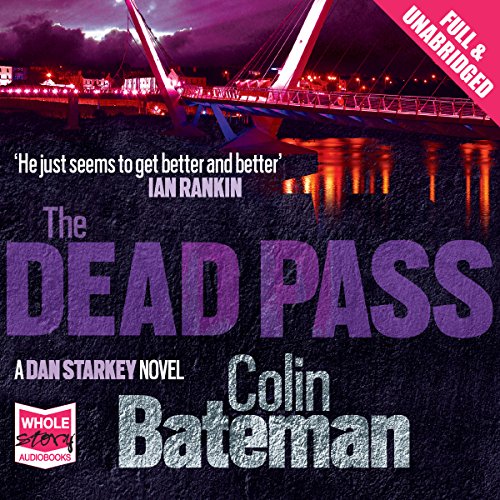 By: Colin Bateman
Narrated by: Adam Moore
Try for $0.00

Hired to find the missing son of retired political activist Moira Doherty, Dan Starkey knows his new case is going to be challenging. Billy 'the Bear' Doherty, a criminal with a nasty drug habit, isn't an easy man to find - his mum is convinced he's been murdered. But when Moira herself is killed, Dan finds himself in the middle of a deadly game of cat and mouse.

What listeners say about The Dead Pass

As Starkey as it gets...

Another amazing Dan Starkey story, if you’ve liked any of the other ones you’ll love this one just as much....

Good lines in a bit of an outrageous plot

The one liners make this a good read, but the storyline gets a bit far fetched....narrator makes characters come to life

If you could sum up The Dead Pass in three words, what would they be?

This is the latest in the Dan Starkey series which continues the hilarious, dark and religious adventures of an independent journalist/detective loser hero who gets into trouble with his witty worldview confronting a dangerous world. With ill considered courage and wise cracks, Dan Starkey survives to live another day.

In a world that has been feminized by political correctness beyond recognition, it is refreshing to listen to a novel full of dark masculine comedy. If Romance novels cater to women, Dan Starkey novels are a gift to men. I recommend starting with the first novel. "Divorcing Jack". There is a formula to the books that are similar to an AC/DC song, but for the same reason I come back for more. .

The Best Starkey Yet

I think Colin Bateman's novels work brilliantly on Audio, Adam Moore's masterful, almost deadpan narration complements the fast paced action and irreverent tone and adds to the humour.
The plot is excellent and weaves in and out of some very very dark places and introduces some very very unpleasant characters, with Bateman making pin sharp points about the current situation in Northern Ireland. Dan Starkey remains as dogged as a terrier and his emotional development still has not progressed beyond about 8 years old, but you're rooting for him from the first moment. There are many many laugh out loud moments which can cause embarrassment when listening on public transport. Marvellous.

They Get Better and Better

I've read all the other Dan Starkey novels and this is the first I've listened too. I was a bit dubious that it just wouldn't be the same, that the images and voices that I'd created for the characters would be overturned. Yet, I loved it. Every minute of it was as good as ever.

typically funny in places but not one of his best

I love Bateman books and regularly find myself laughing out loud. This one though didn't quite fulfill my expectations. Strange plot in places. Narration was good.

What would have made The Dead Pass better?

Using a narrator with a Belfast accent who also knew how to pronounce some N. Irish words: "hallion" for instance

Who might you have cast as narrator instead of Adam Moore?

Narration really killed the pace of this which I felt should have been Chandler with a Belfast accent.

This was my first Colin Bateman novel and I'll be straight back for more. A thoroughly entertaining book with a quirky main character, Dan Starkey, and an excellent supporting cast.
The storyline kept you hooked throughout, with totally unexpected events and twists, with some genuine gasp in shock moments, and plenty of laugh out loud moments as well.
The narration by Adam Moore was perfect.
Get it, you'll enjoy it.