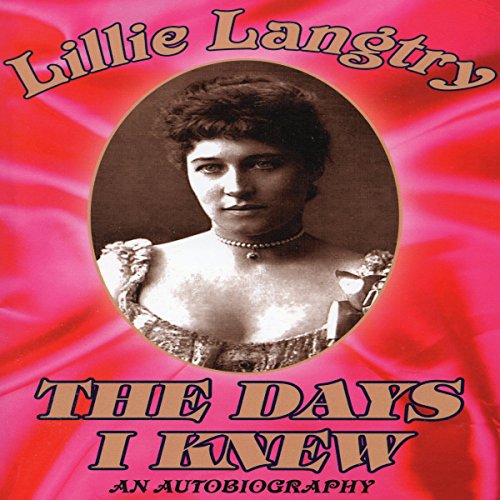 The Days I Knew

By: Lillie Langtry
Narrated by: Lynne M. Smelser
Try for $0.00

Edward VII, King of England. Oscar Wilde. Ulysses S. Grant. Sarah Bernhardt. Judge Roy Bean. George Bernard Shaw. Diamond Jim Brady. Theodore Roosevelt. This is just a partial list of names that has one common thread - they were all friends or fans of one of the most fascinating characters of the Victorian era - the beautiful and talented Lillie Langtry. Some of the names were more than mere acquaintances. Lillie was the acknowledged mistress of the king when he was Prince of Wales. She and Oscar Wilde were close friends. He once said, "I would rather have discovered Mrs. Langtry than to have discovered America. She is the most beautiful woman in the world." Judge Roy Bean, the fabled "Law west of the pecos," was so enamored of Lillie that it is said he named the town of Langtry, Texas after her. Theodore Roosevelt said of her, "She's so pretty she takes away a man's breath." From her discovery by some of the top artists and photographers of the time in London, when she was the new bride of Edward Langtry, to her emergence as one of the most popular stage personalities of her era, Lillie's story could fill a hundred novels. She tells it all with discretion and humor in her autobiography, The Days I Knew.

What listeners say about The Days I Knew

Hard to warm to the subject with this uncomfortable narration. Lillie wasn't American so it seems an odd voice to choose for her. The mispronunciation of English and French names and places became very irritating after a while. It's a shame as it's fascinating to hear Lillie Langtry's story (if at times unreliable!) in her own words. Still worth a listen if you can cope with the audio!