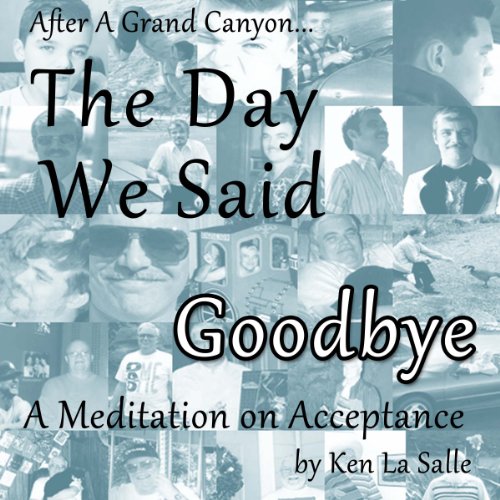 What do you do when your father is losing his life just as you are losing your mind? Run like hell.

At the close of A Grand Canyon, Ken La Salle and his beloved Vicky drive off into the sunset. It’s a fairy-tale ending, providing your idea of a fairy tale includes suicide attempts, hallucinations, and crippling self-doubt.

Now, in The Day We Said Goodbye, it’s time to live the dream. Vicky and Ken get married, travel the world, and embrace the warm light of love. Or so Ken wanted to believe. But he never really dealt with the impulses that drove him to the edge of the Grand Canyon, now manifesting in schizophrenic episodes, like when his ex-wife shows up at his wedding.

And it doesn’t help that his father is dying and Ken has to find a way to say Goodbye.

The Day We Said Goodbye is Ken La Salle’s third memoir, following A Grand Canyon and Climbing Maya. It combines razor-sharp observations with revealing wisdom and the story of how goodbyes are often all we’re left with when everything you know, and everything you think you know, fades away with time. It is a book for anyone who has lost someone, anyone losing themselves…and anyone who is lost.

The audiobook version, read by the author, is beautifully scored with the Josh Woodward song, "History Repeats".

What listeners say about The Day We Said Goodbye