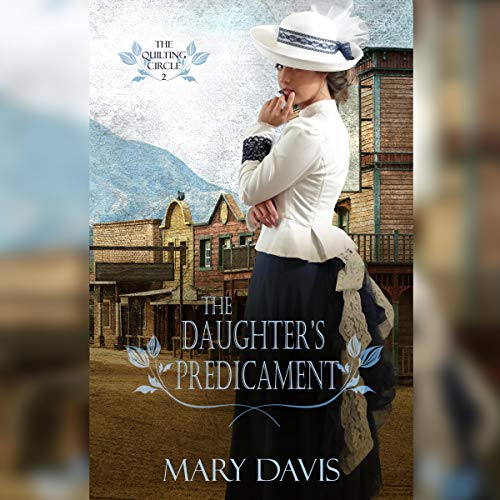 By: Mary Davis
Narrated by: Pamela Gregory
Try for $0.00

Can a patient love win her heart?

As Isabelle Atwood’s romance prospects are turning in her favor, a family scandal derails her dreams. While making a quilt for her own hope chest, Isabelle’s half-sister becomes pregnant out of wedlock and Isabelle - always the unfavored daughter - becomes the family sacrifice to save face. Despite gaining the attention of a handsome rancher, her parents are pressuring her to marry a man of their choosing to rescue her sister’s reputation.

A third suitor waits silently in the wings, hoping for his own chance at love. Isabelle ends up with three marriage proposals, but this only further confuses her decision.

A handsome rancher, a stranger, and an unseen suitor are all waiting for an answer. Isabelle loves her sister, but will she really allow herself to be manipulated into a marriage without love? Will Isabelle capitulate and marry the man her parents wish her to, or will she rebel and marry the man they don’t approve of? Or will the man leaving her secret love poems sweep her off her feet?

What listeners say about The Daughter's Predicament

This was an excellent book by Mary Davis. I enjoyed the story line and was curious as to how the drama would unfold. I was pleased with how the book ended. The narrator did a wonderful job as well. I really enjoyed this book and would recommend it to others

I enjoyed this audio book so much. It was such a sweet and fun story. I really enjoyed the narrator so much as well. I am looking forward to reading or listening to the next story in this series. This story was Christian and clean.

" The Daughter's Predicament: The Quilting Circle" By: Mary Davis Narrated by: Pamela Gregory
I thoroughly enjoyed my visit to the 1893 world of Washington state which the narrator's voices really brought to life. I smiled more and more as the story developed and I a wee bit sad to come to the end. This is a clean sweet historical romance with characters that are believable relating customs of the time that were not always kind to the female of the species. This is a worthy read. Happy Reading ! !
Note: I received a free audio-code for this audiobook from the author. This is my honest review.

I think the stepmom was the worst! She is definitely the fiction model for evil stepmothers everywhere!
Very good narration!
Crazy predicament the family placed her in!!