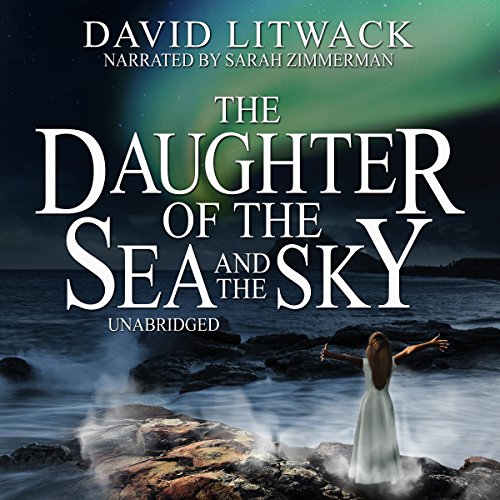 The Daughter of the Sea and the Sky

By: David Litwack
Narrated by: Sarah Zimmerman
Try for $0.00

Evolved Publishing presents the literary saga of a young girl plucked from the sea under mysterious circumstances in The Daughter of the Sea and the Sky by David Litwack, award-winning author of Along the Watchtower.

After centuries of religiously motivated war, the world has been split in two. Now the Blessed Lands are ruled by pure faith while in the Republic, reason is the guiding light - two different realms, kept apart and at peace by a treaty and an ocean.

Children of the Republic, Helena and Jason were inseparable in their youth until fate sent them down different paths. Grief and duty sidetracked Helena's plans, and Jason came to detest the hollowness of his ambitions.

These two damaged souls are reunited when a tiny boat from the Blessed Lands crashes onto the rocks near Helena's home after an impossible journey across the forbidden ocean. Onboard is a single passenger: a nine-year-old girl named Kailani who calls herself "The Daughter of the Sea and the Sky". A new and perilous purpose binds Jason and Helena together again as they vow to protect the lost innocent from the wrath of the authorities, no matter the risk to their future and freedom.

But is the mysterious child simply a troubled little girl longing to return home? Or is she a powerful prophet sent to unravel the fabric of the godless Republic, as the outlaw leader of an illegal religious sect would have them believe? Whatever the answer, it will change them all forever... and perhaps their world as well.

Title: THE DAUGHTER OF THE SEA AND THE SKY


~ I received a free copy of this audiobook in exchange for an honest review.

The land was split in two during the Great Sundering, with an ocean between the two lands. The only place where the two countries connected was the tiny strip of land known as "The Land Bridge" which was home to two massive gates. "They called them 'Asylum Gates' because any refugee who passed through them, even by a hair's breadth, had the right to request asylum from the other side ... It straddled a negotiated boundary and provided the only contact between the Minister's people and the Soulless. Races that had kept apart except in time of war."

Helena and Jason grew up learning to quash their "passions" and to use logic and reason when problem solving or when making decisions.

Helena grew up in a privileged family. Her mother was scientific in every way, including child rearing. Her father was a beloved teacher at the Polytechnic Institute.

Jason grew up with Helena, but his family was not as well off. Despite the difference in their social status, they were the best of friends throughout their childhood. Jason moved away to further his education and to achieve something with his life and Helena missed him terribly.

Through a quirk of fate, (although their analytical brains would never have accepted fate as a valid hypothesis) Jason's new job brought him back into Helena's life at exactly the time she needed him most.

Helena's father had recently died and she had watched him slowly fade away. Since she idolized her father she had been devastated by his death. Compounding Helena's heartache was her mother's emotional and eventually even physical absence.

Helena was contemplating her loss and what to do with her future when she sees Jason running nearby. They both notice something in the water and quickly realize that someone is drowning.

Jason dives in to save the person who turns out to be a nine year old girl named Kaylani.

What neither Jason nor Helena realized at the time was that Kaylani would change their lives forever.

You would think that just the plot lines I have already mentioned would be enough for one book, but those things are just tiny parts of a much more epic tale.

Throw in the supernatural, priests and priestesses, a government bent on jailing anyone and everyone who defies the law even in the smallest way. Add an artist commune for people with damaged souls, a retiring government official who is a stickler for the rules whether they are right or wrong and a zealot with delusions of grandeur. Once you add all these characters into the story, you have one heck of an interesting read or in my case, an interesting listen since I was lucky enough to listen to the audiobook version.

THE DAUGHTER OF THE SEA AND THE SKY surprised me, but I am very glad that I chose to listen to it. I enjoyed this audiobook very much.

The narrator did an outstanding job of relating the story of this audiobook. Sarah Zimmerman was the perfect choice for this audiobook. Her tone, her pacing, her inflections and enunciation were sheer perfection. I rate the narration as 5 out of 5 stars.⭐️⭐️⭐️⭐️⭐️

The audiobook in its entirety was well done. The characters were well written and easily relatable. The setting was unique and interesting. I loved the division of the two countries. The author does an incredible job of detailing how different groups of people see themselves and each other.

David Litwack seems to have an ingrained understanding of how different people view the world around them. It is always interesting to me how multiple people can view the same event and draw vastly different conclusions from it.

David Litwack also does an excellent job of portraying the many character's personal quirks and in explaining how each character's life experiences and their personal history has contributed to their character and beliefs. By the end of this audiobook the listener feels that he (or she) really knows each character and is able to understand what motivated them to act in the ways that they did.

I rate the audiobook version of THE DAUGHTER OF THE SEA AND THE SKY as 5 out of 5 stars. ⭐️⭐️⭐️⭐️⭐️

What did you love best about The Daughter of the Sea and the Sky?

Wow! I thoroughly enjoyed this book- the writing was thoughtful and fast-paced, the characters were real and engaging. Zimmerman's narration was the icing on the cake- her characters were believable and understated. I'll be looking for more work from her and Litwack.

I was provided this audiobook at no charge by the author, publisher and/or narrator in exchange for an unbiased review via AudiobookBlast dot com.

What do you believe

This is a very nice story, with a very unexpected ending. It makes you question what do you believe, what do you have faith in, and who's v voice do you hear. Than it shows you how simple things are. I loved the ending, the simple truth, out of the mouths of babes. A good story for teens and young adults to show how easy it is to get wrapped up in things and see what our hearts desire.

Daughter of the Sea and the Sky

Such a fast moving high action story of a small child's journey. The pulling of strangers to become friends. The healing of many lives this child touched. Well done!

David is actually one of my favorite authors. That being said this book wasn’t as good as the rest of his stories. Still great but I expect to just be swept away by him at all times. He is awesome at world building and character development.
These characters were likable and good. Not certain they will stick with me in the same way some of his characters from his other works have.
Sarah Zimmerman was an excellent choice for narration.
I was given this free review copy audiobook at my request and have voluntarily left this review.

This was a very long story that took forever it felt to get somewhere. I received this book for free in order to give an honest review. I found that it drug on and on not giving you much of anything. Even once it got going I just felt like I was trying to see my way on a foggy day. You keep getting glimpses of a story but then it got swallowed up in filler information. The ending was Anti-climactic . The underlying story seems good I just felt it didn't take me there. Sorry was disappointed.

Loved the narrators voice and the story was interesting. Unfortunately there were a few times I wish the book was easier to follow. Still a nice listen.

Where does The Daughter of the Sea and the Sky rank among all the audiobooks you’ve listened to so far?

Alas, probably in the bottom 40 percent. While I love most books I read I felt this book was for a much younger audience. While a good book, it was not for an adult.

What was one of the most memorable moments of The Daughter of the Sea and the Sky?

When they arrive at the farm and find out all must earn their own keep.

Sebastion moving so quickly down the trail.

Saving the daughter of the sea and sky.

This book was fairly well written.The narrator,Sarah Zimmerman,did a fine job.The main two characters were likable.The length of the book is WAY too long.The storyline is a society based on Reason vs a god based society and a child found in the sea who is a bit of both.Of course we know who 'wins' in these books.Way too much preaching for this very reasonable woman.I was given this book for an honest review.

I thought this was a pretty good story, and fairly family-friendly. Though I would consider it a young adult book, I don't think there was anything in it that I found offensive or would need to shield my 5- and 6-year olds from. I listened to the Audible audiobook and enjoyed both the story and the narration. I'm always looking for good audio books that I can enjoy with my family over summer vacation on long car trips, and I think this would fit the bill, but I don't know that it would hold my kid's attention as well as some other books, but that's okay - it wasn't written for them as an audience. I definitely think older kids could get into it - maybe 10+. I thought this story was well-written, tender, and even inspiring. I didn't find it slow at all. The narrator did a good job with pacing and didn't feel forced - I feel like it sounded comfortable, as it would sound in my head if I was reading out loud. Overall, I enjoyed the story and would read other books by David Litwack and books narrated by Sarah Zimmerman.