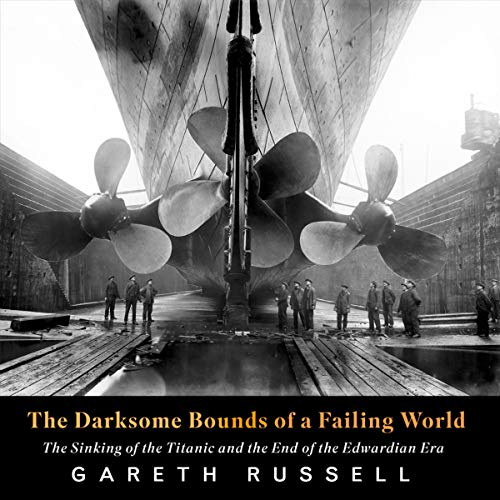 The Darksome Bounds of a Failing World: The Sinking of the 'Titanic' and the End of the Edwardian Era

By: Gareth Russell
Narrated by: Jenny Funnell
Try for $0.00

In this original and meticulously researched narrative history, Gareth Russell utilises the sinking of the Titanic as a prism through which to look at the end of the Edwardian era and the seismic shift of modernity the 1910s have come to mark in the West.

Had she survived her first voyage, the Titanic probably would have dated like other ocean liners. Instead, within a week of setting sail on 10th April 1912, the disaster of her sinking had turned her into one of the biggest news stories of the century. Writing in his signature prose, Gareth Russell peers through the portholes of six first-class travellers to immerse us into the Edwardian era while demonstrating how modernity shook up the class system of the age.

Lucy Leslie, Countess of Rothes; 'son' of the British Empire Tommy Andrews; captain of the industry John Thayer and his son Jack; Jewish immigrant Ida Straus; and model and movie star Dorothy Gibson. Each subject’s unique story offers insights into the established hierarchy during the fin de siècle of prewar Britain and America, the Titanic’s respective spiritual and economic homelands. Through these entwining lives, Russell investigates social class - its mores, its foibles, its accents, its etiquette, its benefits, its casual or intentional cruelties, its potential nobility. Those nuances also invite analyses of the shipping trade, the birth of the movie industry, the aristocracy, the American Gilded Age, the Irish Home Rule crisis, and Jewish-American communities.

The Titanic is the vessel in which we can extrapolate lessons on hubris, folly, greed, love, class, magnificent courage and pitiable weakness. She carried thousands of people, and, in that way, she still has thousands of stories to tell. Drawing on brand-new and unpublished materials, journal entries and film archives from the time, The Darksome Bounds of a Failing World focuses on the symbolism of the Titanic as the floating symbol of Anglo-American success, its clientele an apt illustration of the limitless - technological, financial - possibilities of its time.

What listeners say about The Darksome Bounds of a Failing World: The Sinking of the 'Titanic' and the End of the Edwardian Era

The Darksome Bounds of a Failing World

Over the years, I have read many books about Titanic and this is, certainly, one of the best. (I know many who consider themselves experts on the ship, dislike it referred to as, ‘the’ Titanic, but the subtitle does so: ‘The Sinking of the Titanic and the End of the Edwardian Era). With so many books about Titanic available, there is always the question of whether it adds anything new. I think it does – it is meticulously researched, with incredible detail, and puts events into historical perspective, as well as considering the many conspiracy theories, surrounding the ship. Although author, Gareth Russell, is careful about his facts, he never loses the drama of the events. He takes us through everything; from the making of Titanic in the Belfast shipyards, with interesting background on the city and why it was used, through the voyage, the sinking and the aftermath. Titanic, he states, was the product of ‘British sensibilities and American money.” A world on the cusp of change, with the unknown spectre of WWI about to explode and overshadow the loss of life. Interestingly, Russell suggests that it was the American men who were under more social pressure than the British, to give up their life for the women and children. Lady Duff Cooper, having been informed her husband could not accompany her in a lifeboat, simply went to the other side of the ship and found one which would allow it and declared herself astounded at how easily American wives seemed to accept the separation. This was, to me, quite an interesting perspective, and undoubtedly influenced by the way male survivors were shamed by the press after the sinking; no one more than J. Bruce Ismay (and I highly recommend, “How to Survive the Titanic or the Sinking of J. Bruce Ismay), about the various attacks made on him after his survival. It was also fascinating to learn how quickly interest in Titanic resulted in memoirs and, even a film, with one American actress, wearing the exact outfit in the silent movie (now sadly lost) that she had worn on the night she entered the lifeboat that saved her. Despite knowing exactly what would happen, this is a gripping and informative read, which was beautifully read by Jenny Funnell.