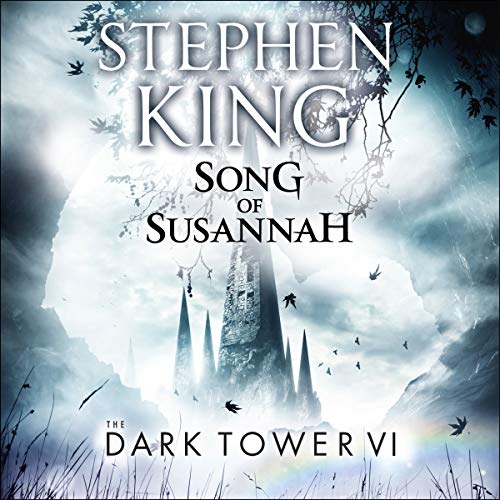 By: Stephen King
Narrated by: George Guidall
Try for $0.00

Stephen King's epic fantasy series, The Dark Tower, is being made into a major movie starring Idris Elba and Matthew McConaughey. Due in cinemas February 17, 2017 USA.

The pivotal sixth instalment in King's best-selling epic fantasy saga provides the key to the quest that defines Roland's life.

In the next part of their journey to the tower, Roland and his band of followers face adversity from every side: Susannah Dean has been taken over by a demon-mother and uses the power of Black Thirteen to get from the Mid-World New York City. But who is the father of her child? And what role will the Crimson King play?

Roland sends Jake to break Susannah's date with destiny, while he himself uses 'the persistence of magic' to get to Maine in the Summer of 1977. It is a terrible world: for one thing it is real and bullets are flying. For another, it is inhabited by the author of a novel called Salem's Lot.

Song of Susannah is driven by revelation and by suspense. It continues The Dark Tower series seamlessly from Wolves of the Calla and the dramatic climax will leave listeners desperate to read the quest's conclusion.

What listeners say about The Dark Tower VI: Song of Susannah

A finely crafted entry in the Dark Tower

The penultimate entry in the Dark Tower saga is also one of the shorter books, but lacks nothing for its comparative brevity. With a fine performance by George Guidall, this rates up there as one of my favourite audiobook experiences ever...

Another masterpiece on the way to the tower. Everything seemed to get really meta in the end, which felt strange, but right at the end the significance of it all made sense. The quest of the katet continues in the next book.

I love George Guidall's reading on DT. the story is also fascinating, can't wait to continue with the saga

Back to the 'real' world

The ka-tet spend a lot more time in the 'real' world or the world of Stephen King in this book, and we have much greater symbolism as well with all the time Susan spends in her 'dogan. The story is really moving along here and you can feel the downward slope of the roller coaster in the story, everything is picking up speed and you can tell the Tower itself is just around the corner.

Pregnancy and birth in horror/fantasy/science fiction have been done before and done infinitely better than portrayed in this book. I did have some sort of investment in the character so stayed with it.

It is beyond weird that Stephen King insinuates himself as a major character. It is self indulgent, egotistical and such a nutso, weak literary contrivance that I am amazed Stephen King used it.

King tells Eddie, when talking about writing the book, that he guessed he stopped writing the book because it was "too big for my little brain" and later he explains how he lost the outline off the back of his bike. Well just those two things alone, say it all don't they! They say why the series is so disjointed and a weak, self promotion for his other books. Pathetic!

By the way - one line from Mr King in this book about Mr King's writing has convinced me I already know how the series will end.

Nice setup for the final volume

Quite a few memorable scenes in this one. The 4th wall break was handled quite tastefully. The Tower is close.

Better than first reading if possible

I had missed so much from this book on my first reading probably in my eagerness to reach the last instalment The Dark Tower. It is a great continuation and is well read and acted by the narrator giving life and character to the stories cast. Onward to the final instalment. Be true

Another cleverly created slice of the dark tower.

Really enjoyed this portion of this epic! real thought provoking stuff. The creation meeting it's creator? But who is the creator, and created?
Loved it.

for some reason I struggled to get into this book more than any of the other tales Of Ka. at first it was almost a chore but as it moved along I felt it easier and easier to listen to.... my least favourite so far... One book left.... may Ka guide me

Didn't know what to expect

Ive never used audio books before now so I didn't know what to expect from this. At first it was hard to listen due to the voiced of characters didn't match what I expected. after i got over this I loved it it was an amazing performance and ill listen to another

Complete down turn to a great story

I've been reading this story since the 80's and loved the first 5 installments. This one was an absolute mess with too many cop-outs and plot holes.

It appears that King ran out of inspiration. It seems that the pressure to finish the story got to him. Writing at parts were great and there were flashes of the old brilliance, but compared to the earlier books this one starts a spiral down that the story may not recover from.

The Rose in NY plotline should have been dropped entirely. It was done poorly and reminded me of a bad blockbuster movie plot.

Breaking of the fourth wall was not done well and unnecessary. King should have rather provided an author's note instead. His relationship with the story, shouldn't have been forced in the story.

Reading the last book now and it only gets better after the strands from this book are behind it. I think skipping this book entirely might make the overall story more enjoyable.

the weakest link in the chain but thankai sai

I'm almost an original fan, back when there were only 2 books. This is my third (now listen) read through of the series, over more than 2 decades.

i'm not reviewing the story (I've read in 2 &6/7ths, so that's credit enough) but I'm disappointed to find the last book isn't available on Audible, especially after such a rant by SK at the end of this book about 'life's work'.

I guess an Audible version isn't commercially viable, so I guess I won't reach the Dark Tower for the final time..

if Sai King gets his inspiration from the Rose, The Door The Tower then may they always stand!! another brilliant piece of story telling!

very good . need to reread all the towers books this far to remember all these characters properly

Going to start final book immediately, totally absorbed, though sad it will soon be over!

Cannot begin to guess what's next

Steven King is delivery a story I really cannot guess the ending too!
I know we are closing in on the end of this epic and all consuming saga,
its been wild,

I’m listening to these in order and I must admit sometimes I can get a bit lost with King’s story but this novel brought it all into line and I can’t wait for the next instalment!

starts with a bang and then peters off very quickly. nothing really happens in the last 2/3. the lame duck off the otherwise brilliant DT series.

Not much going on

Very little happens from a story point of view in this one.

The recording is pretty short and that includes the last 50 minutes which are diary extracts from the author.

As I am writing this, the last book is already out. But I am still so eager to listen to it.

This one is short. Only took me 2 days to listen to it. Like all the books before this, it is engaging, his writing of this book may be his greatest work. This is indeed up there with The Lord of The Rings and other such great adventures. I just hope I don't die before I can finish the series.

Did SK just try to write himself out of finishing?

Did Stephen King just try to write himself out of finishing the Dark Tower series?
LOL my friend, YOU are an absolute nut. hahaha!

this is the weakest book in series and comes off a bit self indulgent. still a good listen though and leads into the fantastic last volume

What a story. Can't wait to listen to the next!

A fantastic story by King with a few quirks here and there, some cliche, others fascinating. Can't wait to cap this series.