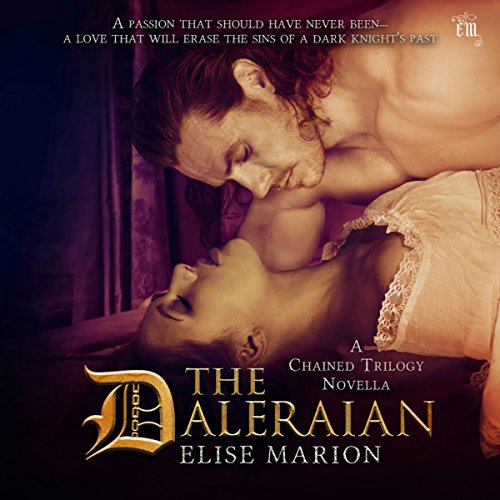 The Daleraian: A Chained Trilogy Novella

The Daleraian: A Chained Trilogy Novella

Lynet Giffard's mixed blood has made her a foreigner among her own people. She has spent her entire life striving to appear quiet, demure, and subservient in an attempt to keep from drawing scrutiny. All that changes when she encounters Sir Jarin Maignart. He is an enemy of her people, and a treasonous murderer - yet those facts mean nothing when she uncovers the complex man inside. Her people scorn her for caring for him, yet no other man has ever seen her as more than a half-breed oddity. With him, she blossoms into the kind of woman she always wished she could be.

Jarin knows he has done nothing to deserve Lynet's love. A traitor and usurper, he has taken lives unjustly and committed treason against the realm. Yet, in Lynet he sees redemption and dares to hope he can become a better man. When a deadly plot against his family is uncovered, Jarin will face a choice between saving his own skin, or suffering the consequences of disobeying the terms of his banishment by returning home to set things right. Can the sullied knight atone for his sins and become worthy of forgiveness and love?

Another fantastic addition to the series. Once again the story is well written, interesting, entertaining and very enjoyable. This story is a bit less complex than the full length novels but it is just as addicting. My only complaint is that it was to short. Love the world the author has created. This is one of those series that once you start you your hooked and can't wait for the next installment.

The whole series is absolutely worth your time and credit. Normally I don't listen to novellas from a series (under 5 hours) I wait for them to be compiled into one longer book, but Elise Marion knows how to write one heck of a story and I would make an exception for these novellas.

Eric Burns does a fantastic job once again with the narration. Nice vice. Great character voices. Clearly spoken with a nice even pace. Narration flowed smoothly. Very enjoyable listen. He is the voice of this series.

I was voluntarily provided this review copy audiobook by the author, narrator or publisher.

A LESS COMPLEX CAST AND A SUPERB STORY

I received this book from the author for an honest review through Audiobook Boom.

I was pleased to have Jarin's story continue with a HEA ending. He was so misunderstood and mislead by circumstances that I liked him despite his previous actions. Family love is strong and these books hail that message. I hope to learn more of the strong family bond between the three (bastard) brothers of different skin. Elise?

Narrator does excellent male voices, keeping them distinguishable even though there are many. Female voices, not so much. Maybe it's just the haughty inflection he gives them. We women don't sound like that!

This book centers around Lynet, has had a hard life, and Jarin, who grew up with money but has lost it all.

Jarin is supposedly an enemy to Lynet and her people, however, when she is up close and personal with him she realizes there is so much more to him than she could have imagined.

Overall, a very Entertaining read and I look forward to the rest of the series.


Eric Burns did well with the narration.

The Daleraian, Novella One of the Chained Novellas.

This is a Novella in the Chained series that comes after Bound, Book Two of the Chained Novella Trilogy. It tells the story where Bound left off of the fate of Jarin and Lynet, as well as the peace treaty of Alemere. It's a well written story and it focuses on two strong characters in this story and in addition, continues the story of the characters from the first two books of the series. I enjoyed listening to this novella on Audible and the narrator continues to do a great job in telling the story.

I purchased this book on Amazon for $2.99 and bought the audiobook on Audible for $1.99. It was well worth the price. I look forwards to the next book in the series: War Bride: Novella Two. I have already purchased every book in this series because of how happy I have been with it.

Yes, it was a good story with interesting characters. Romance with a little battle.

Everyone is forgiven and they get married and brother loves brother. Great ending for the main characters. One way to do it.

The romance was sweet but it would of been cool if the earlier relationship and meeting of the two main characters was part of the story. When he was hurt and she nursed him back to health.

I really enjoyed the story. I received this book for free from AudioBook Boom in exchange for an unbiased review. Thanks!

Loved this story of a bad boy turned good & falls for the servant girl.He even gives up his title for love. Then the best part he adopts an orphan biracial bastard. (panty DROP) I use to think that this series of stories of a areas divided by white, black & asian looking people was cheesy BUT, I fell in love with the many plots, drama & conflicts. I will continue to follow the series because I have to find out WHO IS THE FATHER OF QWEN's baby... Elise Marion.. You have me HOOKED.. This story is worth a credit/money. MORE please..