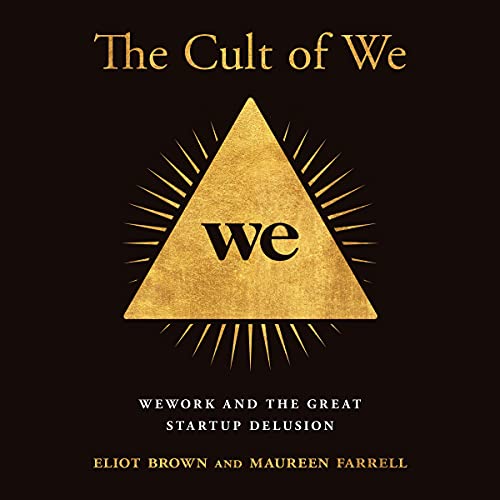 The Cult of We: WeWork and the Great Start-Up Delusion

By: Eliot Brown,Maureen Farrell
Narrated by: Therese Plummer
Try for $0.00

The definitive inside story of WeWork, its audacious founder and the company's epic unravelling, from the journalists who first broke the story wide open.

In 2001, Adam Neumann arrived in New York after five years as a conscript in the Israeli navy. Just over 15 years later, he had transformed himself into the charismatic CEO of a company worth $47 billion. With his long hair and feel-good mantras, the six-foot-five Neumann looked the part of a messianic Silicon Valley entrepreneur. The vision he offered was mesmerising: a radical reimagining of work space for a new generation. He called it WeWork.

As billions of funding dollars poured in, Neumann's ambitions grew limitless. WeWork wasn't just an office space provider; it would build schools, create cities, even colonise Mars. In pursuit of its founder’s vision, the company spent money faster than it could bring it in. From his private jet, sometimes clouded with marijuana smoke, the CEO scoured the globe for more capital, but in late 2019, just weeks before WeWork's highly publicised IPO, everything fell apart. Neumann was ousted from his company, but still was poised to walk away a billionaire.

Calling to mind the recent demise of Theranos and the hubris of the dotcom era bust, WeWork's extraordinary rise and staggering implosion were fueled by disparate characters in a financial system blind to its risks. Why did some of the biggest names in banking and venture capital buy the hype? And what does the future hold for Silicon Valley ‘unicorns’? Wall Street Journal reporters Eliot Brown and Maureen Farrell explore these questions in this definitive, rollicking account of WeWork's boom and bust.

"An amazing portrait of how grifters came to be called visionaries and high finance lost its mind." (Charles Duhigg, bestselling author of The Power of Habit)

“Only a handful of books capture the zeitgeist of a business era. Add this one, a wild saga that caps a decade when founder-worshiping investors threw billions at well-spun visions - even those of a megalomaniac whose new-age real estate enterprise’s losses piled up as fast as its valuation climbed. The duo who broke the story of WeWork’s rise and fall have now artfully fleshed it out in a book whose colourful narrative is undergirded by deep context about the times, and enablers, that made Adam Neumann possible." (John Helyar, number one New York Times best-selling co-author of Barbarians at the Gate)

"Eliot Brown and Maureen Farrell owned the WeWork story as it was unfolding. And now, with The Cult of We, we finally get the chronicle we deserve of a madness that consumed venture capital, corporate America and the world. It's an amazing portrait of how grifters came to be called visionaries, billions of dollars were bestowed on bong-hit ideas and high finance lost its mind." (Charles Duhigg, author of The Power of Habit)

What listeners say about The Cult of We: WeWork and the Great Start-Up Delusion