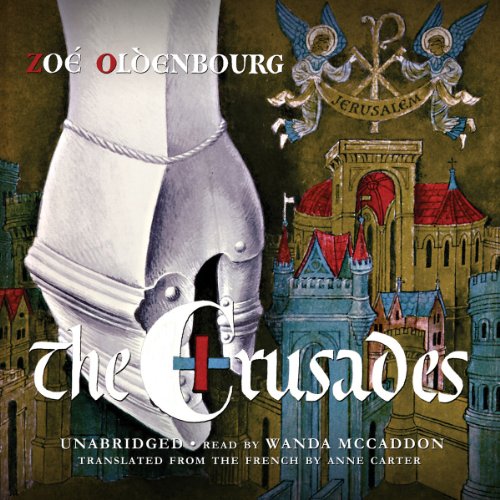 By: Zoë Oldenbourg
Narrated by: Nadia May
Try for $0.00

This is historian Zoë Oldenbourg's masterpiece: an immensely exciting romance, in the highest sense, which at the same time takes an unsparingly realistic approach to the Middle Ages.

With subtlety and exceptional sensitivity, Oldenbourg analyzes the complicated tangle of currents and ideas that motivated the Crusades. As Oldenbourg describes them, the Crusades were not simply a religious phenomenon, nor were they motivated by pure aggression. They were the result of a religious climate that led people of all walks of life to leave their homes and follow the unattainable ideal of heaven on earth. Oldenbourg evokes the entire structure of feudal society and reveals the ingenuity of the Latin Kingdom of Jerusalem. The story is peopled with such great personalities as Bohemond, Tancred, Peter the Hermit, Godfrey of Bouillon, Saladin, and Richard the Lionheart.

What listeners say about The Crusades

A very detailed account of the first three crusade

I must say, this is a lovely and detailed book as well as insightful and descriptive. However detailed description in this case is a double edged sword. I found it enjoyable, but I believe it could be too monotonous, in my opinion, the content of the book could be wrapped up in 14 hours, but because of the descriptive narrative, it was dragged on for 24 hours. This volume is overall, very enjoyable and accurate as far as the social condition of the 11-13 century Europe and Middle East.

She does justice to history

A true classic of history, this great work by Oldenbourg seems a lasting treasure. She seems to have a familiarity with the mindset of the 11th century crusading Norman, the Byzantine, the Syrian Jacobite, the Armenian, the Turkoman, and the Moslem, from the peasant to Saladin himself. She takes us on a whirlwind tour of Syria in these fascinating decades of back-and-forth struggle, elucidating the motivations of the struggle, whether chivalrous, religious, or barbaric. This book is just as important for understanding the East as a history of the middle ages is for understanding the west.

Excellent Study of the Crusades

This is a well written book on the first three crusades that is in audio format. It is a good book to learn about the origins of the great clash, between the Islamic east and the Christian west, that is once again raging in the middle east. It is very informative and covers the subject quite well. I thoroughly enjoyed this audio book and recommend it to others as well.

It took me a couple of tries to get through Oldenbourg's history of the Crusades. She begins and ends her account with several chapters of social history and analysis; when I first tried to listen, I found myself wanting her to ditch the peasant farmers of France and get ON with it.

The second time around, I was less hurried and was able to listen to these chapters with pleasure. And she does, eventually, get on with it, providing a vigorous, anecdote-rich history of the first three Crusades. The military action develops clearly and vividly, and the background chapters are useful in understanding how Europe and the East came to blows in the way they did. It's a good overview.

Oldenbourg chooses to focus almost entirely on the rise and fall of the Kingdom of Jerusalem and the other crusader kingdoms - "Outremer," or "Over the Sea," as they were known. This focus helps to explain, in two crucial areas, the choices she made, choices that I think weaken the book.

First, why only three Crusades? I would have preferred to see the story continued at least through the fourth Crusade, when the Western Europeans sacked their former ally, Constantinople; but that Crusade has little to do with Jerusalem. It's a reasonable approach, but it leaves out one of the more interesting campaigns (not to mention a generous helping of irony).

Second, while the main action was happening in Palestine, there were auxiliary conflicts in other areas, especially during the Second Crusade. There were campaigns against Muslims in Spain, against pagan tribes in Northern Germany, against fellow Christians - "heretics" - in southern France. Oldenbourg covers almost none of this.

Another aspect of the book that troubled me is a curious anti-feminist slant to some of the narrative. For example, Melisende, one of the queens of Jerusalem, gets especially negative treatment for trying to meddle in politics. The picture of her given by Oldenbourg is 180 degrees from that given by Jonathan Phillips in his excellent one-volume history, Holy Warriors. Phillips devotes a whole chapter to Melisende, titled “A Woman of Unusual Wisdom and Discretion.”

Those reservations aside, it is, as I said, a good overview. And Nadia May is, as always, an energetic reader, someone who is able to bring a lightness of tone to her narration that in some mysterious way, probably known only to her, complements the seriousness of the narrative.

Would you consider the audio edition of The Crusades to be better than the print version?

This is my first review on an audio book,,but I felt I really should write one seeing that this book only has 4 stars...as it is every bit a 5 star book in my honest estimation. As well, the narrator is just perfect! loved listening to her and she reads like she is the one who wrote the book..very good!

What other book might you compare The Crusades to and why?

I haven't ever read or watched a documentary on the Crusades as thorough and as good as this book .

What does Nadia May bring to the story that you wouldn’t experience if you just read the book?

Very pleased with her reading and style..she read perfectly and sounded like she had even written the book. it was just perfect really. hope she narrates some more books that are this good .

no,i wanted to re read it over and over..as I like to really get into every word of a book as good as this!

just extremely good...can't believe it only has 4 stars ...maybe my 5 star review will bump it up closer to where it belongs on the rating scale!

A Bit Deeper than Beginner Level

This book covers the first three (and most infamous) Crusades. I would suggest that it's a little more in-depth than a review for beginners, but it's certainly not on the expert level. With a basic understanding of who the players are and perhaps a period map at your side, you'll have little trouble following along. As with most history, it's going to come down to your level of interest. The more interested you are, the more you'll get out of it. The good thing there is that, as any history buff can attest, any good story can be made that much better with the right telling. This one is a quality spin and makes the characters and their personalities stand out so as to keep you hooked.

Nadia May is perfectly chosen as the narrator for this sort of thing. She brings both a conversational quality and an authority to the text, bringing it to life. I've heard her work on other Medieval histories, and just as elsewhere, her pronounciation of international names, places, and phrases lends to that credibility that you just can't get from a narrator that might otherwise butcher the linguistics. Such liguistic dexterity gives the book that extra nudge.

A serious history of the first 3 crusades

This is a serious history of the first three crusades. It gives a very detailed look at the way things happened at that time. To its credit, this work does not attempt to judge the crusades by today's sentiments as so many casual observers of the crusades do. Still there are some comparisons with modern times but not in an attempt to pass judgment.

The listener may benefit from reading less detailed works about the crusades before wading into this book because s/he would at least be familiar with the major places and names and could then listen to this work to to fill in colorful details and minor events and personalities.

This is a great listen on the history of the Crusades. It is a large volume of information, and at times difficult to follow because of all the detail. I wish I had noticed the copyright date when I bought the book (1966), instead of just the audio copyright (1997)...This makes a world of difference in how an academic book like this is written/heard. The difference in the discussion of crusades since 9/11 and the whole perspective of Muslim relations and views of non Muslims are very different. However, this is an academic book, and the information of how the views at the time of each of the players is very helpful for understanding how we got in the position we are today.

Performance and production worst I have heard

I was really looking forward to this book. The text is excellent. But the narrator takes long pauses every paragraph as if it is the end of a chapter and the audio keeps cutting in and out. I have never had such a bad recording from audible. It is really a shame as the book is very well researched and written.

I wanted to learn and understand what in our history makes world so very angry with other religions and why so many people have such hatred for people who have a different religion then you do. This book is a little hard to follow as far as who the narrator is currently talking about, but it does give me great insight in to why the three main religions of the world fight so much over the holy land. I personally do not feel the hatred of the other religions that are different them mind. As I feel we should all LOVE everyone, but this book makes me understand why the angry is so very strong after 2000 years of fight over the holy land. It is hard to understand how so many kings fought wars believing that GOD wanted them to do so. Great book to understand the history of the holy land and the Crusades that have control this land for so very long. I can only pray for PEACE in the world & the holy land as I love all religion and respect them very much.