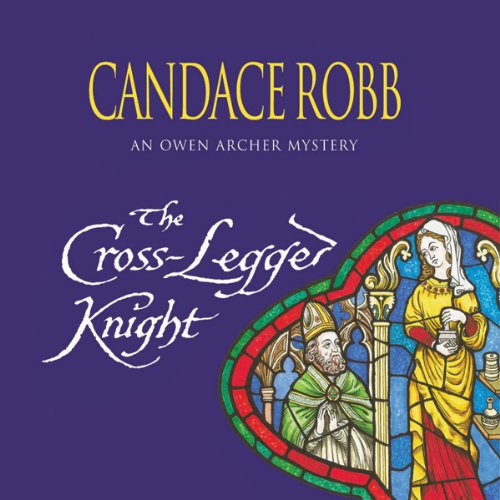 By: Candace Robb
Narrated by: Stephen Thorne
Try for $0.00

England 1371. A solemn procession winds out of York Minster, after the funeral of Sir Ranulf Pagnell, patriarch of a powerful Yorkshire family. William of Wykeham, Bishop of Winchester, escorted the knight's remains north after his death in France, but he is shunned by the family. They hold him responsible for failing to negotiate the Sir Ranulf's ransom. Only a few days later, Wykeham's townhouse is found ablaze. The bishop has been staying with John Thoresby, Archbishop of York and is safe. But when the body of a young woman is discovered in the under croft, scandal threatens. Owen Archer is troubled. Was the fire an accident or arson? Was the woman left there to die or the fire intended to conceal her body? Stationing guards in front of the smouldering remains, he starts asking questions. When the dead woman is identified as a midwife known to many of the city's women, there is a flurry of panic. Owen has much to do if he is to discover who killed her - and why.

What listeners say about The Cross Legged Knight

I like medieval mysteries and Candace Robb's Owen Archer books, read by Stephen Thorne, are an enjoyable listen.

They got the wrong midwife!!

The blurb gave me hope that the seriously annoying weird sister who's infested this series would come to grief, but no such luck... Well narrated,
as usual, which is one of the main reasons I keep listening. I don't think I'd actually read this series - I.e., devote a lot of time to doing nothing else - but they are pleasant accompaniments to knocking up 10,000 steps a day, housework, or just dropping off to sleep.
Stephen Thorne manages many voices, and I suppose he was the obvious choice for Owen Archer - he was the best Cadfael (Welsh, unlike Jacobi's TV Englishman), and doesn't make people have silly voices- except the aforementioned local witch, who talks in a ridiculous way anyhow!
I'm not sure if I will continue with the other narrator, as it's never easy to adjust after one you've accepted as "the voice".

Candace Robb has again delivered a brilliant "Archer" story. However I would like guidance as to the sequence of these stories as the Archers background story is out of order for me. As for Stephen Thorne brilliant, just wonderful voice, for that reason alone I would listen to anything he narrated.