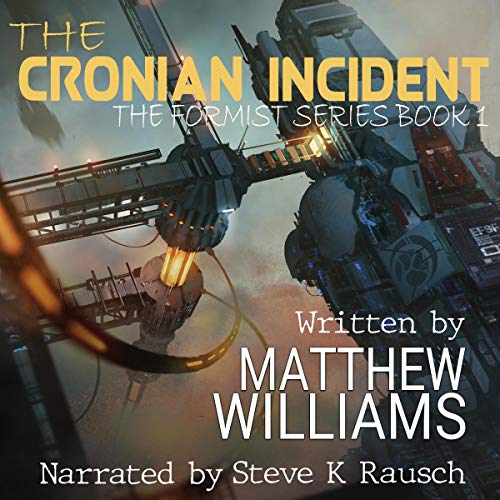 By: Matthew Williams
Narrated by: Steve Rausch
Try for $0.00

Hard boiled private investigator meets hard science fiction in this sci-fi tale that fans of the Expanse will love!

Jeremiah Ward was just another convict, a disgraced investigator who once worked the Martian beat, now serving his sentence in a mining colony on Mercury. When a member of a powerful faction goes missing on Titan, Ward is given an opportunity he cannot pass up. In exchange for investigating the disappearance of this figure, he gets a clean slate and a second chance.

But, the deeper Ward digs the more secrets he finds. Instead of investigating a missing person’s case he becomes embroiled in a centuries-old conspiracy and Ward comes to realize his one shot at redemption may cost him his life.

What listeners say about The Cronian Incident

That ending killed me!!

This book is so good!! I enjoyed it immensely. I loved the world, I felt for the main characters. The tech was impressive. The mystery was complete and total. And then that blasted ending. AURGH!!

Politics reign supreme in the new world and them's that's got, keeps. The story was incredible! I was so engrossed in the story that I did not see the ending coming. It broke my heart. Thank goodness there is a book two!!

The narration was excellent, in every sense of the word. The main character, Jeremiah Ward, was an ex-intelligence officer, turned con, then private investigator. There was some gruffness and wide-eyed exasperation to Ward learning his new role and figuring out what was going on. The narrator nailed it. There were Russians (natch) and incredibly powerful female characters amongst a host of other voices. The narration made this story real.

I'm glad there is a second book in this series. I need some vindication!

I liked the main character and the journey he went through the growth he experienced during the course of the book. With a good story and narration that was great this book stands out. I recommend a listen.

Jeremiah Ward is an ex-cop from the distant future. A detective who has found himself incarcerated. He gets pulled into a new investigation that could vastly improve his own life, but it requires him to travel enormous distances, abide great danger, and muddle through endless deceptions and intrigue.
This book has a lot of things going for it. The story is fun and engaging, the narrator fits the role to perfection, and the pacing is perfect. It has a hint of the 50’s private eye, but in a futuristic setting. I say only a hint, but that hint is in every scene. I really enjoyed that aspect of it and it paired nicely with all the great descriptions and world-building. The contrast between the two really made for some interesting listening.
There are some detractor’s, but they are minor. The world-building is interesting and detailed, but can be tough to follow and certainly to keep track of. There are many locations and descriptions and they tend to get just a little cluttered as the book goes on. I felt like I had to back things up a few times to make sure I knew what had been described and had absorbed it. I also felt that, while the ending was interesting, it also came about a little suddenly. It is a stylistic thing I guess, but it felt somewhat condensed.
Overall, I enjoyed the story and I am looking forward to reading and listening to more.

Just to be clear: This book was given to me for free, at my request, and this is an unbiased and voluntary review. When I have something positive or negative to say about any given book, I do so. I want that same honesty when people review my own work, so I stick to it when reviewing the work of others.

I love the Expanse and when I read it is something similar, I had to get my hands on it. Now the book is nothing like the expanse in plot however there are some similarity in background history. This is about humans who are powerful, greedy and think they can do what they like. While others have to fight for their freedom.
I’ll admit the ending really surprised me. I never would have thought it would end this way. I like the fact the main character tries to change in some way. He believed he was getting a second chance to start again and yet he ends up where he started no fault of his own.
I loved the mystery in this story, even though I figured out who did it quite quickly, but we get to know the characters, the place they live and the politics.
This is for 18+ due to violence (moderate), profanity (moderate) and sexual content (one scene).
I am looking forward to the next book.

I enjoyed this read very much! The author's understanding of potential scientific developments is impressive with fascinating ideas on the future of neural implants and planetary terra-forming (as incorporated into the story). Looking forward to upcoming installments!

I read the book when it first came out, and was interested to hear the audio version. Suffice to say, it did not disappoint. Part mystery, part look at what humanity could be like one day, it's a great story paired with a top-notch narrator. Totally recommend.

the pacing was quite good. you can tell that it's been heavily influenced by the expanse. unfortunately the characters don't achieve the depth necessary to really care about them and they seem a bit stereotypical and contrived. what is the first book in a series it shows some promise but the ending is quiet unsatisfying. the narrator has a good voice however when he voices females it takes on a very wispry distracting quality.

This book is the story of a former law enforcement officer who has been sent to a penal colony and is offered a chance to redeem himself. The story progresses as he begins to search for a missing person and begins to suspect he has not been told the entire story and that those who sent him may have other motives.

There is no end to the plot twists and issues that arise during the search. The book does not give away the ending and keeps you guessing throughout.

The narrator is very good. Expressing emotion well and a full range of voices for the various characters.

This book was provided free of charge and this review was freely done.