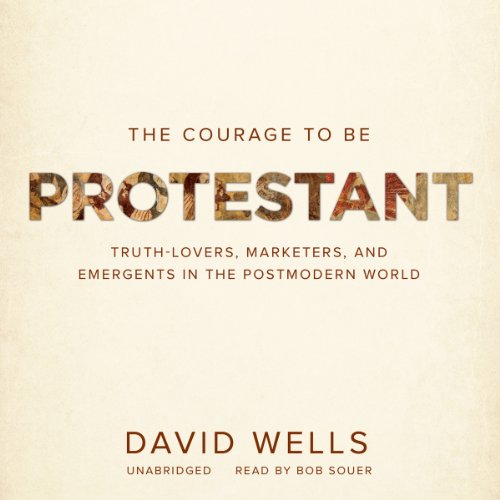 The Courage to Be Protestant

It takes no courage to sign up as a Protestant. These words begin this bold work - the culmination of David Wells' long-standing critique of the evangelical landscape. But to live as a true Protestant - that's another matter.

This audiobook is a jeremiad against new versions of Evangelicalism - the Marketing and Emergent Churches - and a call to return to the historic faith, one defined by Reformation solas (grace, faith, and scripture alone) and to a reverence for doctrine. Wells argues that historic, classical Evangelicalism is marked by doctrinal seriousness, as opposed to the new movements of the Marketing Church and the Emergent Church. He energetically confronts the Marketing communities and their tendency to try to win parishioners as consumers rather than worshipers, advertising the most palatable environment rather than trusting the truth to be attractive. He takes particular issue with the most popular evangelical movement in recent years - the Emergent Church. Emergents, he says, are postmodern, post-conservative, and post-foundational, embracing a less absolute understanding of the authority of scripture than traditionally held.

The Courage to Be Protestant is a dynamic argument for the courage to be faithful to what biblical Christianity has always stood for, thereby securing hope for the church's future.

What listeners say about The Courage to Be Protestant

Dr. Wells administers some strong medicine to a sick and anemic evangelical church. May we all have the courage to take the medicine and the courage to stand for Biblical truth. Semper Reformanda.

This work brings so much clarity to the issues our churches battle with. This book will help many an elder avoid pitfalls of unbiblical tactics in "growing" God's church.

This is not a new book but a book that needs to be looked at frequently by those who claim fundamentalism as their theological and practical point of view. The book is as relevant now as when it was written, and in many minds more relevant.

This book was very informative. Every Christian needs to read this to gain an understanding of mordernity in the life of the believe it.

Fantastic, biblical, and kind-hearted critique of much of Evangelicalism

Though Wells wrote this book more than a decade ago, it’s content still rings with the sound of immediate relevance. That’s because Wells is addressing a perennial temptation for Christians in the world. Should we conform to this world, or should we conform to Christ and endure whatever difficulties we may fear in this age?

Wells, rightfully, urges to reader to declare allegiance to Christ and to trust in the true King of Glory to do all that He said He would. May God help us.

This is one of those books with heaps of anecdotes and great observations that you could readily spend a lot more time than is needed to digest, understand and appreciate. I found the best way to go through it for me was to let run and limit the times of having to rewind. it's just too dense for that so I let it run. if you do that you'll find there's a lot of repetition anyway throughout the book just different anecdotes and angles. Nevertheless I really liked the content and general theme of the book ... the protestant church losing its way in the world, away from biblical understanding and losing the foundational doctrines maintained and practiced throughout the ages from the time of Jesus. I'm a charismatic/Pentecostal Christian and love studying the bible, it's doctrines and church history; contrary to many in churches like mine; and he really hit the nail on the head that the church service today especially by mega- churches and tele-evagelists is shallow, usually an entertaining pep talk, encourages self- centrism and is devoid of the historical and doctrinal foundations from which it arose. Yes I would say give it a read.