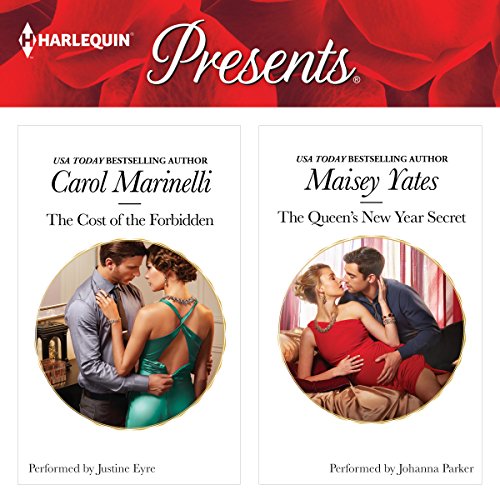 The Cost of the Forbidden & The Queen's New Year Secret

The price of endless pleasure!

Clients, women, money...ruthless CEO Sev Derzhavin is a master at getting whatever - and whomever! - he wants. Rejected as a child, Sev has never been refused since.

So when his personal assistant resigns, Sev can't resist the challenge of enticing the beautiful brunette to stay....Naomi Johnson has to walk away before she gives in to the chemistry with her infamous heartbreaker boss and opens her heart to yet more bruises. But on their last business trip to Dubai, Sev makes a shocking suggestion to relieve the tension between them: enjoy some overtime - in his bed!

Kidnapped by her king!

As the clock strikes 12 on New Year's Eve, the fairy tale is over for all of Petras when Queen Tabitha - refusing to live in a loveless marriage - asks her husband for a divorce. But anger erupts into passion, and when Tabitha flees the palace she's carrying King Kairos's heir! Discovering her secret, Kairos kidnaps his wife. Against the backdrop of his secluded island paradise, he proves there's no escaping his royal reach. He will use the desire that's gone unsated between them for too long to ensure his wife returns to his side.

Loved every single word. Would refer this book to everyone . Loved it. couldn't stop listening.

The Cost of the Forbidden & The Queen's New Year S

I listened to this duo on Audio Amazon and enjoyed the stories. Written by Carol Mainelli. The first is the second book in that series. It is about Sev Derzhavin one of four 'brothers' who were raised in a Russian home for unwanted children. This is about his life in time with his new PA, Naomi Johnson. Both of them have problems with their past childhoods. He was unwanted and basically tossed away. She was unwanted by both of her parents and ignored. What happens when they travel the bumpy road towards happiness.
Written by Maisey Yates. Queen Tabitha has given her husband papers. They have been married for five years and only for the good of the country and children. But no child has been graced for them. King Kairos's is livid. But what has happened to them. This is their story. Will they have the happy ending that will smooth the hurt they both feel? Or will it end in divorce?

The Cost of the Forbidden was really good. The narrator’s inflections can be annoying at times because it makes her sound repetitive in all the books she does. But it doesn’t take away from the book. The story achieves what I’ve come to love in a good Harlequin Romance (which I’ve been a fan of for over twenty plus years). It begins with an attraction that is further developed due to some constraint or character flaw. Then the undeniable romance wins despite the character’s misgivings, and after a nice heart wrenching moment you get your happy ending. I liked it quite a bit.

The Queen’s New Year Secret is actually pretty bad. Too much angst due to unspoken truths kills a good romance for me. Unless you’re 14 years old and still too immature to know your own mind, two adults have no reason to struggle communicating what they want from each other for the first third of the book. When you end up spending more time waiting for them to keep it real so they can find the love right in front of them rather than being swept away by the story it just begins to feel like work instead of a leisurely read. Maybe it feels like work because you turn into some quasi-shrink trying to figure them out. For me this isn’t very entertaining so I didn’t finish that book.

Stories okay but narrator in first was awful

I thought the stories were fine but the narrator in the first was awful. She was trying to put emotion into her performance but it caused her to have a voice with an underlying burr to it which is very annoying. I am hearing impared so this doesn't give clarity to the performance.
I'll be looking out for her narrations in the future, but to avoid.

The first story is simply amazing, I love this series and Sev's one is no different, and of course the narration is impeccable
The second story: the begining is problematic as the reader doesn't have any way of knowing who is the cold one in the relationship and who is supposed to be angry at who. I didn't like it, even though I liked the narration the rest was not to my liking