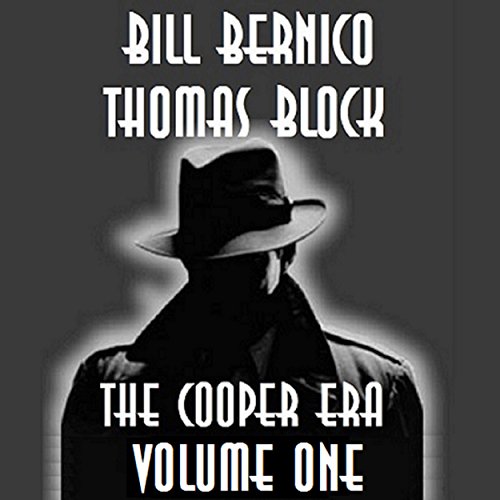 The Cooper Era, Volume One

The Cooper Era, Volume One

Matt Cooper, having recently left the L.A. police force, begins to develop his P.I. business in Hollywood, California during the years 1947 through 1971, when his son, Clay joins him in the business. The Cooper Era is a four-book series written by Bill Bernico and Thomas Block.

What listeners say about The Cooper Era, Volume One

What made the experience of listening to The Cooper Era, Volume One the most enjoyable?

to an extent. Keeping the story lines interlocked kept my constant attention

Have you listened to any of Thomas Block’s other performances before? How does this one compare?

Tom always does a great job. This was no different.

not going to happen...

Possibly. The various cases followed by the main character are well conceived, but unfortunately not built on. In one or two cases there is a supposition made by the detective as to what he thinks happened and then the entire issue is dropped. After a while it starts to get maddening.

Fewer "coincidental" cases and build on the ones that are already open. There were many very good ideas that could have been a single novel by themselves. Additionally, I would suggest that Matt Cooper keep a better eye on his firearms. One case of "the murder weapon was your gun Matt" would have been OK, but two was distracting.

Which character – as performed by Thomas Block – was your favorite?

Could you see The Cooper Era, Volume One being made into a movie or a TV series? Who should the stars be?

I've enjoyed several other books that have been narrated by Mr. Block and I must say that his audio work on this book is the one thing that continued to make it readable. I enjoy his inflections, and seemingly flawless ability to interject his own personality into the work and take the listener along for an enjoyable ride.