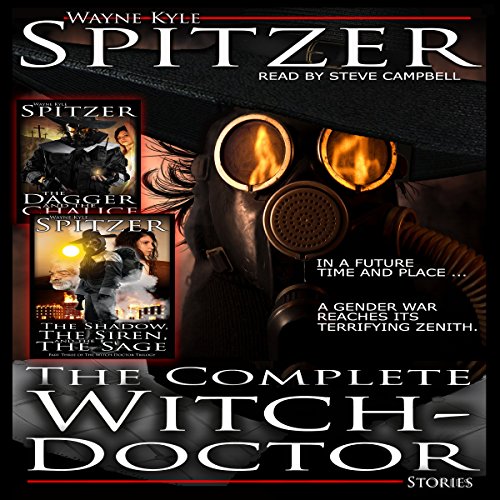 By: Wayne Kyle Spitzer
Narrated by: Steve Campbell
Try for $0.00

They were the kind of musical notes men and woman once swayed to - even worshiped to - or so Jasper had told him, ground from an instrument called an “organ”, which had once been common, or so he’d said but had vanished from the face of the world. So, too, were there cymbals, which echoed throughout the crew compartment of the war wagon like tinsel - if tinsel could be said to have a sound - and mingled with the steely whispers of their muskets and tanks and other gear as the truck rocked and their harnesses held them fast.

“When a maaan loves a woman,” sang a hearty and soulful voice both inside and outside the compartment, and Jeremiah knew they were close, else the driver wouldn’t have cued the music, and when he scanned the other witch doctors, strapped in six to a bench in the wagon’s cramped confines, he knew they knew it too. What was more, he knew that however fearsome they looked in their black jumpsuits and white flame-retardant vests, their goggled respirators, their buckled hats, they were frightened, too.

But then the wagon ground to a halt, and there was no time to feel anything, much less fear, as Jeremiah unbuckled and piled out with the others. And yet, as he paused momentarily to take in the building - a ramshackle six-story brownstone that looked as though it had been built before the Betrayal, much less the Pogrom - a strange thing happened. He thought he heard a voice, not from without but entirely from within - a woman’s voice, a witch’s voice. And it said to him, as faintly as the cymbals at the start of the music, "Why have you come for us, witch doctor?" And he found himself scanning the illuminated windows of the brownstone as if someone had perhaps shouted to him (rather than reaching directly into his mind) and saw behind one of the uppermost panes a figure so small and motionless that he might have thought it a piece of furniture, a lamp, perhaps, had it not slid to one side and vanished.

What listeners say about The Complete Witch-Doctor

Witch doctors are from Mars, and Witches . . .

What we have here is a tale that revolves around two warring factions, men and women. The fact that they can cast spells or read each other's minds should have no bearing. We begin with the war in full swing, niether side willing to flinch, nor can they, to give an inch would men their utter and complete eradication. So, what happens when two rivals put down their anger and hatred for one another, and find that the other isn't so bad? Well, they realize that there is no reason for them to fight, and that their leaders gotta go!

The bulk of th story is good, it flows from scene to scene, and the characters aren't two dimensional beings. My biggest issue was that several character's names are very similar, such as the two witches, and it made me (as an audio listener) have to wonder who I was following as they were speaking or mentioned. Nothing major. The end of the story could have been a bit more climatic/dramatic, as it was it was an easily telegraphed ending, but it worked in the context of the tale.

Campbell's narration is smooth, and he does a great job with the voices. Each is distinct, regardless of the gender, and he really fills them with emotion. He is quite polished, and is pleasant to listen to as the story progresses. I'd have to say that I would listen to more tales set in this world if it became a series, but it would have to be something prior to this story, as this tale pretty much handles all the previous issues the martians and venusians had with one another. Or maybe not, there might still be factions that cling to the old ways, I suppose. Either way, it is definately worth the time to listen. Even though I did receive a promo code for this review it in no way influenced my considerations of the material, and in fact, inspired me to be more honest. In fact, getting a code generally makes me harsher as a reviewer as I am more often concerned what someone like Me will decide based on my review.

A book made good by narration

So many things make zero sense I can’t even take my time to describe it.

Deadliest battle of the sexes

The Witch Doctor duology tells of a world where men and women have been at war for decades, neither budging in their stances nor their resolve. Witch-Doctors are the special forces of the male army, all of which are armed with flamethrowers and their signature masks; while the women employ magics through powerful witches. Our Witch-Doctor is the one that will end the war...but how?

Steve didn't have a lot to work with, but what he had he made work very well.