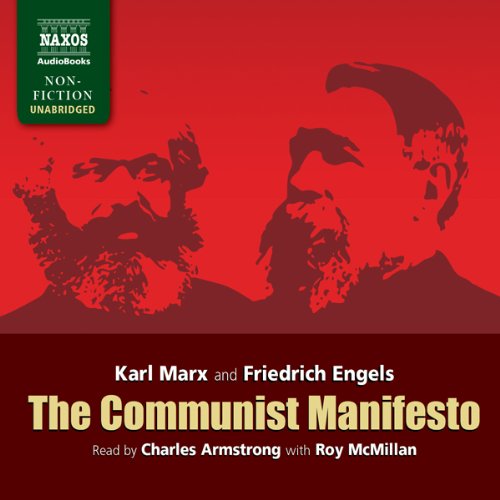 Without question one of the most significant books in modern history, The Communist Manifesto is a brief, populist pamphlet that distils the core ideas of communism into accessible prose. Published just months before violent uprisings threatened to destabilize much of the European establishment, it outlines a view of history as a constant battle between the classes that will inevitably result in revolution. An angry call for a stateless world where the workers are no longer exploited, its depiction of the remorseless nature modern capitalism is as alarming and striking now as it was in 1848.

What listeners say about The Communist Manifesto

Taken in the context of it's time...

The performance is solid: whether or not you agree with the observations and claims made is going to depend on your personal Political beliefs.

The Communist Manifesto highlights patterns and struggles of working class peoples around the world. I gave the "Story" a 4 because, although I personally hold many beliefs in common with the Communist Party of yore, but I find their willingness to disregard other movements as either problematic : the integrity of ones race, for instance, is viewed as important, despite working class citizens struggling regardless of race or ideology, and issues of gender equality are mostly just dismissed as problems that aren't severe, and will be solved by the inevitable rise of the Proletariat.

Taken in the context of it's time, I understand where these policies and beliefs come from and can personally set them aside from the ideology of the contemporary movement. I would give it 5 stars, but not in the modern context.

Modern readers or listeners will need to determine for themselves if they believe that the otherwise non-problematic ideas are inherently valuable enough to share or discuss a text that has problematic concepts within it.

As always with history, standing on the shoulders of Giants means personally understanding that not all ideas of the past are worth keeping: With any historical philosophical text, it is important to keep that in mind when deciding what value one gains from such works.

I really enjoyed this listen a great deal. Definitely something all should listen to. I only wonder how communism would have made out if in a country that already had wealth to spread such as America. Instead, it always fell in the hands of the wrong people.

If anyone wants to understand the horrors unleashed by communism in the last century, they could do worse than starting with the Communist Manifesto. Destruction of the family, destruction of national identity, destruction of religion, introduction of income tax, central banks controlled by the state. It’s all here, and it’s always ended in starvation and the death of hundreds of millions.

One to be shared

A great peice of history and philosophy well read and at a perfect pace. This really makes you think and also educates throughout. I highly recommend this to anyone with a love of history or an interest in a less self-centred oppositional view to capitalism.

This book illuminates the mechanisms behind the genocidal Communist countries of the 20th Century. It's primary focus is towards hate of 'the other' and the destruction of Western democratic society and tradition.

It also helps us understand how this ideology has splintered into modern ideas such as Feminism, Political Correctness, Gender Ambiguity etc, or perhaps these ideas could even be part of a 5th column working today to undermine the stability of Western democratic societies.

The diametrically opposed 'Mein Kampf' should be your next stop to understand further how 'good intentions' can be turned into murderous actions.

Absolutely brilliant and insightful. I am definitely going to listen to it again and again till it sinks in.

hunger for more... I felt left in the dark with no way out ... seem incomplete

so very hard to finish the manifesto has already become irrelevant in modern society removing freedom from the individual so that we can all be miserable.

An excellent outline of Communist ideals laid down by the o.g. But Popper poked holes in his ideas and overt reliance on historicism. Yet Marx may be right in the end once automation exacerbates the class divide.

The Charter of Modern Day Society

The only reason I gave this audiobook 5 stars is to entice people into buying it to realise that this manifesto governs the very way we live and how conceive our reality. The ownership of private property today is rare today, property is owned by the banks which are governed by Marx's proposed central banks. Bankers made up a large portion of the bourgeoisie around the time of the manifestos publication. This manifesto is self contradicting and the work of a devil's advocate, Marx proclaimed that if God does exist his soul was taken out of hell and assigned to him. Abolition of religion and abolition of family? Really? This guy has influenced how knowledge should be perceived, no wonder why we live in a hell disguised as a paradise.

communism is essential for the proletariat.

fantastic, informative, one of the most important texts in history.

power to the people, now!