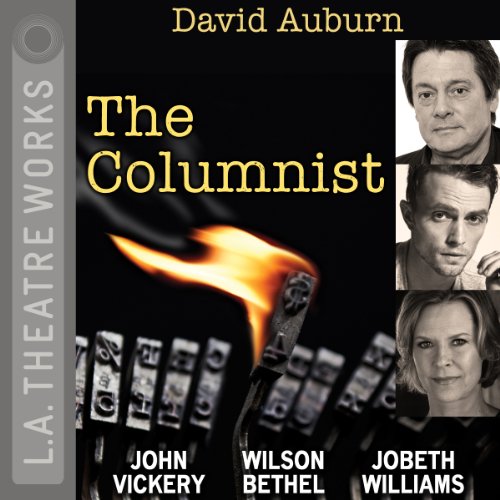 Translated by Richard Wilbur. Veteran journalist Joseph Alsop thrived in his role as the right-hand man for Washington’s political elite, influencing both policy and public opinion with his inflammatory columns. But as the political certainties of the post-war era began to chip away in the late 1960s, so did Alsop’s authority, both on the page and in his own life. An L.A. Theatre Works full-cast production featuring: Tara Lynne Barr, Wilson Bethel, John Getz, David Krumholtz, John Vickery, JoBeth Williams. Includes a panel discussion with Geoffrey Cowan, a professor at the University of Southern California’s Annenberg School of Journalism, playwright David Auburn, and the New York Times’ national political correspondent, Adam Nagourney. Recorded by L.A. Theatre Works before a live audience.

What listeners say about The Columnist

This is my second David Auburn play. This is about Joseph Alsop and is a brilliant look at how someone like Alsop could play a role in politics as a journalist that probably no one today could. I don't want to give away any major plot lines, but this is a mostly true look at Alsop in his era. Alsop was one of the most powerful men of his era, a journalist whose column was carried by newspapers all over America. But little was known of him as a person, because in those days, the private lives of the movers and shakers was off limits. Witness JFK and his serial womanizing, J Edgar Hoover's presumed homosexuality, and so on. Alsop was a public figure who pressured presidents and clashed with journalists who thought differently about the major issue of the day, the war in Vietnam.

This cast is stellar and I cannot imagine better performances. As a bonus, there is a question and answer session at the conclusion of the play with the playwright. This is an outstanding way to learn a bit of history and be absolutely gripped by drama. One of my favorites!