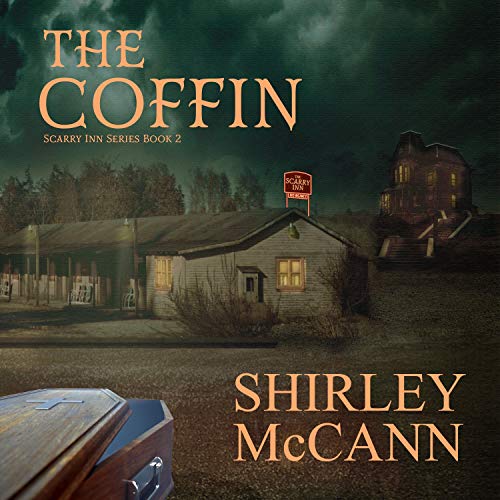 By: Shirley McCann
Narrated by: Joey Eugene
Try for $0.00

When Clare, Lise, and Kelly arrive at The Scarry Inn just before a major storm, they're thrilled to learn they'll be staying in a room known as The Coffin, which is adorned with coffin beds and other macabre decorations.

Little do they know that one of them will end up in a coffin for real - because a tornado isn't the only thing threatening the inn's grand opening. A killer is determined to make sure the inn doesn't open at all. And that person will stop at nothing to achieve that end.

What listeners say about The Coffin

I love a good murder mystery, especially isolationist murder mystery dinner murder mysteries! Three girls are gifted a trip to the Scary Mansions murder mystery weekend by Clair's aunt. Clair's cousin is a recent employee of the Scary house as she is the niece by marriage of the owners. Unbeknownst to the girls and other guests there were real murders that took place at the mansion only 6 months earlier. As the weekend unfolds and the guest begin to explore they find themselves with a real murder mystery to solve or at least survive. I enjoyed the story but would have enjoyed it more had there been a different narrator. I really did not enjoy him, it sounded forced and not very natural. I'm sure the series would be a decent read though. Regarding the story I would have liked a little more build up and atmosphere leading up to the first murder, it happens right out of the gate and I feel there is more suspense that could have been capitalized upon. I received a free review copy of this book at my request and have voluntarily left this review.

Very well written with a lot of action, suspense and thrills.

The narrator used a wide variety of voices, my favorite was Marge, just doesn't get better.

This is 2nd of Scarry Inn series and was a suspenseful murder mystery like the 1st. Good characters some likeable (Dick, Madge, Kelly to name a few) couple not. Interesting setup up of the inn‘s rooms and food served then a tornado. This murder mystery could be listened to by anyone especially ok for teens and young adults as does not have gross gory scenes but unexpected murderer. Would listen to next book. I was given this free review copy audiobook at my request and have voluntarily left this review. Thank you

So when I first started this book, I wasn’t sure what to think since I haven’t read the first one. However, the transition into the story made it easy for me to fully submerge myself into the what’s going on. In this book, the Scarry Inn is preparing to open after the gruesome murders that occurred there 6 months before. The guests who have been invited have no idea about its past until they arrive, and then what’s supposed to be a fun weekend turns into a struggle for their very lives.

This story reminded me of Agatha Christie’s novel And Then There were None. Just about every chapter was filled with a new terrifying situation, and the not knowing of which character would die next. I love how the author was also able to keep me in suspense about who the killer was.

The narration was smooth and added to the dismal tones at all the right times creating an audiobook heavy in drama. An excellent pickup for fans of horror.

Can you survive another visit to the Scarry Inn?

The Coffin picks up about six months after the ending of The Scarry Inn. Although the author uses flashbacks and character narrative to give a good background to the first book in this series, The Coffin is much more enjoyable if read after the first. The plot of this story is somewhat familiar and several of the main characters from book one return in book two, but this book is less scary than the first book. The first book had an incredibly creepy feeling throughout, but I figured out what was happening very early in the story. This book is the exact opposite: I had no idea what was actually happening or the identity of the guilt party until the very end, but I didn't feel the same level of spookiness. Both books were equally enjoyable.

In The Coffin, Madge, Dick and Clive Scarry - all siblings and all with recently deceased spouses - decide to go ahead with the opening of the Scarry Inn despite the tragic events from book one. The new characters in this book are the guests traveling to this hotel for a murder mystery weekend. Three of the guests are teenagers, one of whom is related to the hotel's mentally disturbed maid. Another guest is a reporter digging for a scoop on the dangerous events at the hotel's first opening. Throw in several other guests, a tornado warning and tension between the Scarry siblings, and you have the makings of another disaster. Not only did I enjoy watching the events play out in this book, but I love a mystery that takes me completely by surprise, and The Coffin most assuredly did this.

Joey Eugene's narration is great. He narrates the first book in the series, so the continuity added to my enjoyment of the production. He has a few mistakes in pronunciation, but his performance was smooth and flowing overall.

In my opinion The Coffin is an ok book about murder, mystery and revenge. Joey Eugene did a good job as the narrator. I am voluntarily leaving this honest unbiased review.

About the same as the 1st

I'd really hoped this 2nd book would be better than the first. Sadly, it was pretty much the same. It full of a lot of dialogue that does nothing for the story. The idea of the story could have been so much better. Characters were under developed. It was a little disappointing.

the book was not easy to follow or come to a point where i could feel that i understood the book or characters. seemed scattered and the reader was more deliberate and slow vs in the flow. the reader worked to vary voices but i found that the book was slow and tough to follow.

I was expecting more,I think.This came off very 'B movie' to me.The story would have been ok with some editing. Joey Eugenes narration was fair in the beginning and did get better towards the end. I was given this book by the narrator,author or publisher free for an honest review.

Come to the Scarry Inn!

The Coffin: The Scarry Inn, Book 2 by Shirley McCann
Narrated by Joey Eugene

I received a copy from the author and I am voluntarily leaving a review.

The reopening is only 6 months after the deaths, with a murder mystery weekend of all things and the Inn is fully booked. Complete with coffin beds and skeleton themed shower curtains they really pull out all the stops to create a “ scary “ environment for the guests who consist of a couple of women and a husband, a newspaper reporter and a group of teen girls. When a storm hits, the owners and the guests think it is an added extra giving an air of excitement to the weekend but events get out of control and they get more than they bargained for.

This is the second book in The Scarry Inn series and I enjoyed this one more than the first. Maybe it is due to already having completed the first story having an idea about the theme or a feeling for the owners etc, either way the author creates a thrill combining a murder mystery with acutal murders, the perfect whodunnit. I also think the narrator is more expressive in this book, conjuring a spooky mood at the right moments. The setting is well explained and I found myself wondering why anyone would reopen an Inn after such tragedy but as the incidents in the first book were beyond the control of the owners, I also understand the need to fulfil poor Thelma's dream.

I think they're all three Scarry.

Six months after the tragic events of the previous Christmas, the Scarry Inn on the outskirts of Frightened finally was having it's formal opening and launching with a murder mystery weekend. Theatrically decorated with themed rooms including Coffin, Morgue and Crematorium, it aimed to make the guests uneasy from the beginning. And Mother nature was giving an helping hand by sending thunder, rain and warnings of a cyclone coming their way. Dick Scarry was still uncertain that they were doing the right thing by opening so soon after his wife's, Thelma's, murder, but his brother Clyde and sister Madge were determined to make the Inn a success...

A fun murder mystery thriller, very simply told and easy to read, though a bit repetitious in places. As in the previous book, The Scarry Inn, main protagonists other than the three Scarry siblings, include three girl friends celebrating school graduation and the young reporter who had been interested in the Christmas killings, so could fill in background information. There is little attempt at full characterisation but the tension builds from the beginning. Although it is helpful to know the back history from book one, it is not essential as the reader is fed information as the story progresses.

Joey Eugene is again the narrator of this second in series, The Coffin, and continues his good individual voicing of all of the characters. His tone is pleasant, well modulated but flawed by the same slightly hesitant delivery. Nevertheless, a nice performance.
My thanks to the rights holder of The Coffin, who, at my request, freely gifted me a complimentary copy, via Audiobook Boom. An enjoyable, slightly spooky fun read especially suited to young adu!ts