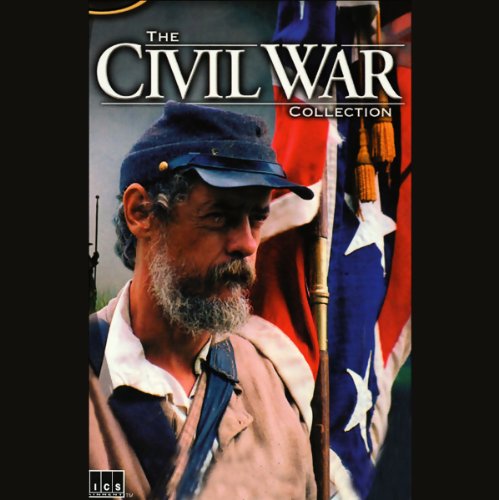 By: Readio Theatre
Narrated by: Joe Loesch
Try for $0.00

Entrenched in a conflict over slave labor, the industrialized North and slave-powered South of the mid-1800s became entangled in the only war to be waged between Americans on U.S. soil. The Civil War, infamously known as the bloodiest military conflict to date, engaged three million Americans, claiming the lives of over half a million.

The long march from Secession to Southern Reconstruction comes to vivid life with The Civil War Collection, a riveting audio documentary that leads the listener on a compelling historical timeline chronicling America's insurrection. History buffs and educators alike will marvel at these peerless recordings offering unmatched scope and accuracy. From Fort Sumter to Appomattox, The Civil War Collection is a uniquely valuable testament to the tumultuous era of Lincoln and Lee.

What listeners say about The Civil War Collection

An excellent glimpse into the Civil War

Mixed with first hand accounts and an overall narration. Only compliant is that episode 3 seems to be missing. There are 8 episodes in total and each is roughly an hour long. However episode 3 is only 5 minutes long before starting on episode 4.

I will try to make this "short and sweet". I disagree that this set is for the Civil War novice only. I am a Civil War "buff" and historian (self proclaimed of course..) and I thought this series was VERY entertaining. In fact, I looked forward to running my 5 mile run daily just so I could listen to this production. AND..production is exactly what it is. Music, Full sound effects, 1st person accounts performed by a myriad of characters..none of which overshadows the central narratives being told.
I agree there are plenty of "common knowledge" stories and narraiton in here, but at the same time there are some real 'gems' that you won't get in your average 'over-the-counter' Civil War narrative.
It is also a VERY thorough history account covering the prewar decades, major battles, and my favorite section which was a good hour or so dedicated to post war reconstruction, treatment of veterans, etc.
Along with the major points there are some sections dealing with less covered period histories like Native American involvement, some minor, yet important, battles and skirmishes, etc, etc etc

My MAIN gripe with this set (I'd really give it 4 1/2 stars if I could instead of 5 because of this) is that the first few hours are not really in any order..they are random stories and narratives thrown together, often repeating incidents, details that have already been covered. BUT that corrects itself by the 3rd hour and follows a more correct timeline (for the most part) . Another small 'irk' I have, if you will, is that a few (very few) precise dates are incorrect and a few Civil War "incidents"."urban legends" that have been debunked/corrected over the years are still presented as fact.
Other than that, this is brilliant. It is NOT politically correct and period terms ARE used..which is a good thing when trying to convey the era. Tons of first person accounts combined with a sweeping history mixed with small anecdotes makes this a MUST LISTEN TO for both CW experts AND novices.

This Is A Great American Classic!

Absolutely the best recollection of the Civil War I've ever heard! Dennis Stone did a masterful job of narration! The music, sound effects and incredible character voices brought the Civil War to life for me! The accounts were often those I'd never heard before. A lot of thought and wonderful production went into this audiobook. Excellent job everyone! Thanks for the experience!

since I read a lot history type books this was very basic, but if you want a great starter Civil War book this is it.