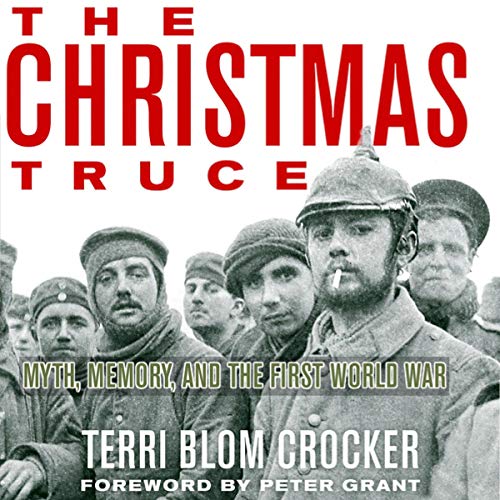 By: Terri Blom Crocker
Narrated by: Byrwec Ellison
Try for $0.00

In late December 1914, German and British soldiers on the Western Front initiated a series of impromptu, unofficial ceasefires. Enlisted men across No Man's Land abandoned their trenches and crossed enemy lines to sing carols, share food and cigarettes, and even play a little soccer. Collectively known as the Christmas Truce, these fleeting moments of peace occupy a mythical place in remembrances of World War I. Yet new accounts suggest that the heartwarming tale ingrained in the popular imagination bears little resemblance to the truth.

In this detailed study, Terri Blom Crocker provides the first comprehensive analysis of both scholarly and popular portrayals of the Christmas Truce from 1914 to present. This new examination shows how a variety of works have both explored and enshrined this outbreak of peace amid overwhelming violence. The vast majority of these accounts depict the soldiers as acting in defiance of their superiors. Crocker, however, analyzes official accounts as well as private letters that reveal widespread support among officers for the détentes. Furthermore, she finds that truce participants describe the temporary ceasefires not as rebellions by disaffected troops but as acts of humanity and survival by professional soldiers deeply committed to their respective causes.

The Christmas Truce studies these ceasefires within the wider war, demonstrating how generations of scholars have promoted interpretations that ignored the nuanced perspectives of the many soldiers who fought.

"A sharp look at the so-called 'Christmas truce' of 1914, discovering that distortion has colored many accounts of it." (Kirkus)

"This is certain to be the standard work on the subject." (NYMAS Review)

What listeners say about The Christmas Truce

Slow as hell, but worth it.

I dont know wether it was because of the narrator or writing style. But getting through this book was a drag. Dont get me wrong, the subject is interesting and its worth a Read of nothing more to dispell some myths a out the first world war. I have studied war history and the philosophy of War, and I would recommend this book... If you can get through it.

I did find the book interesting, but very repetitive. The Christmas Truce was a valid time in WWI. This writer has produced more of an academic study of the truce and not a story or a discussion. For those looking for a treatise, this is for you. For those who are looking for a fast paced story, this book is not it. Well researched and many accounts of survivors however.