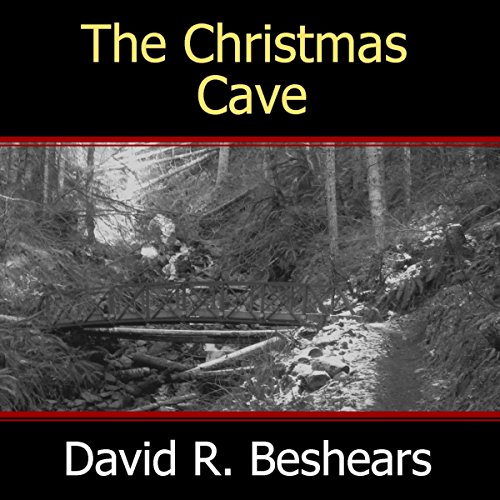 By: David R. Beshears
Narrated by: Dan Absalonson
Try for $0.00

Opening scene... December 1960: Thirteen-year-old Jenny Harper is exploring the caves with her brother Bill and their best friend, Mike. They see a strange shimmering light up ahead. Bill rushes ahead, disappears around the bend.

Fade to present day. Thirteen-year-old Jack and his 12-year-old sister Amanda visit their Grandma Jenny in the mountains over the Christmas holiday.

They hear the story of a mythical cavern that Grandma went searching for 50 years earlier with her little brother Bill and their best friend, Mike. Her brother was lost, never to be seen again.

Drawn to the mystery, Jack and Amanda meet up with Daniel Madsen, a local boy diagnosed with Leukemia and only months to live. He tells them of a boy who went into the caves a few days before Christmas, 1910, and came out three years later telling of "The Christmas Cave", a world of amazing colors and lights.

They find their way to the Christmas Cave and discover much more than they expected.

Novella based on the screenplay The Christmas Cave, written by David R. Beshears.

What listeners say about The Christmas Cave

I just loved “The Christmas Cave”.

Author David R. Bashears has written a novella that has a broad appeal not only for pre/tween/teens, but adults as well. The audio production, narrated by Dan Absalonson, sets the stage for an absorbing listening experience. His vocal performance is the perfect touch to this unique tale about siblings Jack and Amanda, as they are drawn into an daunting adventure fifty years in the making.

I appreciated genuinely not knowing where the plot would lead to next, and enjoyed the warm and compelling narration style Narrator Dan Absalonson provided throughout the production.

I highly recommend this audiobook to people searching for a unique tale in celebration of the power of family, friendships and the holiday spirit.

Quite short but cute

Everyone hears about the Christmas Cave but nobody has seen it. Jenny, Mike, and Bill decide to go find it and although Jenny remembers seeing the bright, gorgeous, blue, red, and green lights, she cannot remember how they got there or how they lost Bill. He ran ahead and just disappeared.

Nobody has seen it since then, even though they have searched for Bill but somehow the myth has still spread about this wondrous place.

Years later Jenny's grandchildren come for a visit and hear about the myth. Being kids they make a plan to go find the mysterious cave.

This is a really cute story, told over a little more than one day. The caves have been searched and searched before and after Bill disappeared but no evidence has shown the cave really exists. The kids are not put off track, of course, and decide to venture in.

This young adult is a light hearted mystery. Quite short but cute. There are a few heart-stopping moments but for the most part this could be told to anyone.

Narration by Dan Absalonson was good. Soft and quiet. It reminds me of something that would be perfect to listen to on Christmas Eve with the kids. The production was also good, no weird noises. I can't remember if anything else was added in but there is when part, near the end, where in the story someone burps, so the narrator actually burps! I would prefer to skip those types of noises but it was just the once (that I can remember) so it did not take away from the story.

Exploring Caves isn’t only for spelunkers!

Exploring caves can lead to wonders.
A family event leads to an adventure of a lifetime! I really enjoyed this book by David Beshears. I’ve enjoyed several books written and narrated by Dan Absalonson and this is definitely another one to add to my list.
Reunions and bonding makes for a fun and exciting tale!

I wouldn't say well-spent, but I wouldn't call it time wasted, either.

I wasn't particularly moved by the ending. It was well in keeping with the tone of the story and suited it well, but it wasn't anything special.

What does Dan Absalonson bring to the story that you wouldn’t experience if you just read the book?

Dan Absalonson's voice is pleasant to listen to and very easy to understand. His subtle changes of voice and, in some cases, accent, for the characters brought some great personality to the story.

The story didn't appeal to me much. It felt a little bland, although the subject matter itself was intriguing. I didn't get any real sense of danger or conflict, even though I knew it was there. I didn't much care for the way things started, honestly. The author used a sort of laundry-list description for characters that had me groaning, even as a crisis was taking place. Overall, the story was okay.

It is nice, though, to have a different kind of Christmas story like this. It's so outside of the "norm" with feel-good Christmas stories that it's worth a listen for that alone.