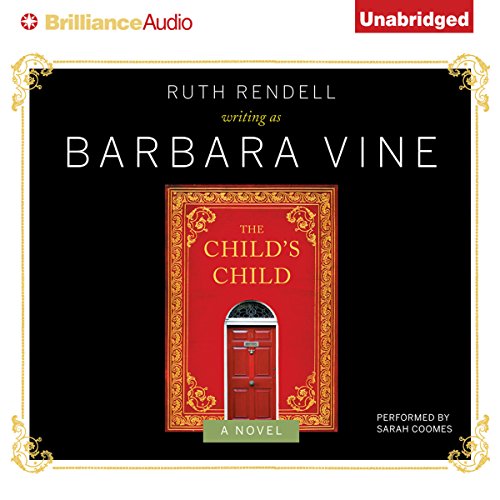 By: Barbara Vine
Narrated by: Sarah Coomes
Try for $0.00

When their grandmother dies, Grace and Andrew Easton inherit her sprawling, book-filled London home, Dinmont House. Rather than sell it, the adult siblings move in together, splitting the numerous bedrooms and studies. The arrangement is unusual, but ideal for the affectionate pair - until the day Andrew brings home a new boyfriend. A devilishly handsome novelist, James Derain resembles Cary Grant, but his strident comments about Grace’s doctoral thesis soon puncture the house’s idyllic atmosphere.

When he and Andrew witness their friend’s murder outside a London nightclub, James begins to unravel, and what happens next will change the lives of everyone in the house.

Just as turmoil sets in at Dinmont House, Grace escapes into reading a manuscript - a long-lost novel from 1951 called The Child’s Child - never published because of its frank depictions of an unwed mother and a homosexual relationship. The book is the story of two siblings born a few years after World War One. This brother and sister, John and Maud, mirror the present-day Andrew and Grace: a homosexual brother and a sister carrying an illegitimate child. Acts of violence and sex will reverberate through their stories.

The Child’s Child is an enormously clever, brilliantly constructed novel-within-a-novel about family, betrayal, and disgrace. A master of psychological suspense, Ruth Rendell, in her newest work under the pseudonym Barbara Vine, takes us where violence and social taboos collide. She shows how society’s treatment of those it once considered undesirable has changed - and how sometimes it hasn’t.

What listeners say about The Child's Child

I've read and loved everything by Ruth Rendell AND by her as Barbara Vine. Especially loved her as Barbara Vine. But this book is just a mess. Two stories are told, one with barely any plot at all, the other (within the first story but at length) with a sort of a plot and three of the most unpleasant, uninteresting characters in all of fiction. There's no rhyme or reason here. At all. When the music came up at the "end" my mouth dropped open and I said, aloud, "You've gotta be kidding." I don't know what's happened, here, but it's depressing and really annoying. I did listen all the way through, tho. I mean, it is Ruth Rendell (or it's supposed to be) and I kept hoping that at some point it would all make sense. It didn't. It doesn't.

Loved it until the ending....

What made the experience of listening to The Child's Child the most enjoyable?

What was one of the most memorable moments of The Child's Child?

Switching to past story

Wish the ending had been a bit less ambiguous; wanted to really know what happened to the main character.

Perfect pairing of narrator with story!

What did you love best about The Child's Child?

Fascinating intertwined plots -- a novel within a novel -- and the narrator's accent and delivery fit the moods of both perfectly.

What was one of the most memorable moments of The Child's Child?

The end of the main (contemporary) story -- jeopardy and resolution.

Accents, changes of pace to evoke characters and plot tempo.

I will say that the end left me puzzled. I had expected the two plots to be pulled together more in some common resolution than was the case here.

Not Entwined by This Vine

What disappointed you about The Child's Child?

Grace and James' argument, "Who historically has had it worse: Gay men or unwed mothers?" was the book's theme in an inelegant nutshell. You know who really had it worse? We did, for having to spend ten hours of our lives with these characters!The pregnant female protagonists of both storylines are unsympathetic and uninteresting, both in their personae and their actions. Andrew and James (the homosexual couple in the present-day story) aren't engaging or endearing, either. The murder they witness seems as contrived as its impact on them. In fact, this murder figures hardly at all, until a brief, unconvincing flurry of melodrama at the end.

What could Barbara Vine have done to make this a more enjoyable book for you?

Frankly, I would have been just fine with a tale solely about John and Bertie, completely eliminating the present day storyline, and the loathsome women in this novel. These characters were the most developed, and it seemed that Ms. Vine liked writing about them more, as well.

There was something about the way Ms.Coomes says the word "baby" that set my teeth on edge. Seeing as this is (rather more than less) a novel about pregnancy, I may need (rather sooner than later) to make a dentist appointment. She was also a bit too actor-y for my taste, but I became rather inured to that affectation after the first couple of hours.

I was appalled by the female characters. They both were by turns self-involved, foolish, and vapid. I never really cared about them or their respective plights. The present-day gay couple, Andrew and James, was never developed enough to care much about. I kept waiting for the emotional bang which I've come to associate with Barbara Vine novels, but all I got was a whimper. Neither tale was satisfactorily drawn to conclusion. Instead, both storylines just sort of petered out. (An authorial attempt was made to slap a bow on the contemporary tale's denouement, but it did not make a presentable package.)

I'm pretty stingy with my credits, and I try to choose wisely, but this time I let my love of Vine/Rendell novels skew my judgement. I ignored the other two two-star reviews and clicked away! In retrospect, I do think I could have spent my credit better elsewhere. I did not think that it would ever be possible for me to say that about a Barbara Vine novel, but, alas, there it is.

Not the best Barbara Vine story but I enjoyed it

I am new to audible books. Usually they put me off because I don't like most narrators. I loved this narrator and I loved the first part of the story. The story told within the story was a bit dull and ending was very rushed. Barbara Vine endings are usually awesome. They untangle with a bang but this one just fizzled out and did not excite me. However, I enjoyed listening to the book a great deal and this is what Barbara Vine does best, entices you with complex characters and their lives.

Would you be willing to try another one of Sarah Coomes’s performances?