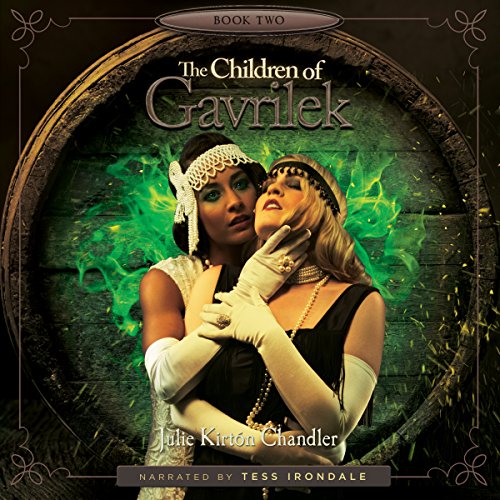 By: Julie Kirtón Chandler
Narrated by: Tess Irondale
Try for $0.00

Sailing aboard a storm-thrashed vessel from America to Cuba, a young woman, Audrianna, and her mysterious son, Devon, are shipwrecked and left for dead. They survive thanks to the mystical efforts of a small community located on the coast of 1920s Georgia. While in the care of this unique group and its beautiful and loving leader, Kendis, Audrianna comes to discover the secrets of her son's cognitive powers, his (and Kendis's) otherworldly origins, and an enthralling, Earth-changing game that threatens the existences of both the alien descendants of Gavrilek and the unsuspecting inhabitants of Earth. The key to the universe's survival lies in the unraveling of Audrianna's conflicted past and desires, as well as in the seemingly motley collection of castoffs that Kendis has nurtured and trained.

Invigorated by mesmerizing prose and fervid imagination, The Children of Gavrilek weaves together world history, science fiction, and romance to unleash a powerful story of wrenching emotion and unexpected relevancy for today's age. Its author is at the height of her narrative powers and her creation will keep you captivated from the opening moments until the last sentence.

What listeners say about The Children of Gavrilek

Wow! I thoroughly enjoyed this.
The Children Of Gavrilek follows Audrianna and her quest to find her mothers killer, and on her fathers deathbed vowed to find out what had happened to her.
Well written Fantasy/Sci-fi story, incorporating history and romance.
Great character development with plenty of plot twists to keep you intrigued.
100% Pure Awesomesauce.
Loved it!
A shoutout to the Narrator too!
Different spins on character voices made good for listening with a great range of accents.
Her intonation was awesome, and brought the story to life.
Well worth listening too!

You are dropped in the middle of a story with very little explanation of things. I found it a bit confusing at first.

It was a bit sudden.

I bought this book because of Tess Irondale her performance is great as always. I could listen to her read anything.

I enjoyed it from the first thru to the last page . excellent writing and great characters