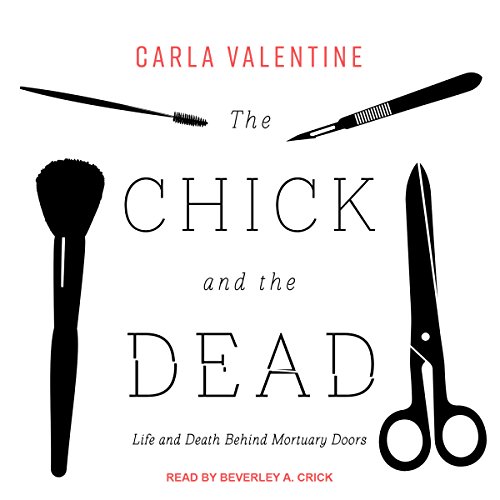 The Chick and the Dead

By: Carla Valentine
Narrated by: Beverley A. Crick
Try for $0.00

Carla Valentine works with the dead. After studying forensics, she assisted pathologists with postmortems for years before becoming the curator of the world's most famous pathology museum. When it comes to death, she truly is an expert, and in this book she shares that expertise.

Using the most common postmortem process as the backbone of the narrative, The Chick and the Dead takes the listener through the process of an autopsy while also describing the history and changing cultures of our relationship with the dead. The book is full of vivid insight into what happens to our bodies in the end. Each chapter considers an aspect of an autopsy alongside an aspect of Carla's own life and work and touches on some of the more controversial aspects of our feelings toward death, including the relationship between sex and death and our attitudes toward human tissue collection.

Starting with the first cut, we move from external examination into the body itself, discovering more about the heart, stomach, and brain, and into dismembered and reconstructed bodies, at each stage taking a colorful detour into the question of what these things can teach us about the living.

What listeners say about The Chick and the Dead

While I'm sure the stories are really interesting, the narration is so lifeless and droning that I found myself daydreaming often. I rewound several times after zoning out but zoned out again-every time.
I didn't care for the history at all. I prefer personal and work stories, but after rewinding several times, I gave up. I can't finish.

Absolutely fantastic book that was a perfect blend of humor, introspection, tidbits of informative insight into the world of post mortems, and a great example of finding your place. If you have a natural curiosity about what goes on behind the mortuary door and why people choose the death industry as a profession, you will definitely enjoy this book!

I absolutely loved it! So informative and funny! I couldn't get enough of it! One of the Best I've listened to!

The story was informative and gripping. I loved the narration! Good for anyone into the whole being dead thing.

I loved this book. Very informative. I'm in the medical field so I was able to follow along without any problems. The narrator was excellent. ❤️

Though I technically did not finish this audio book into its entirety, I did enjoy it for what it was. I had cancelled my Audible account, I unfortunately did not use it as much as I thought I would and was wasting money each month on the subscription.

Though I still have the book in my library and I stopped at Chapter 9 I may or may not be picking up on any of my audio books for a while.

I thought the stories contained in the pages here were very interesting. Learning about the laws and process of mortuary work in the UK was eye opening. Another book on death that is not for the faint of heart. With vivid descriptions of decomposition and the process of working on a corpse, no holds bard.

One of the reasons I may not choose to finish the book in the audio book form or even physical form, is to my own dismay...I feel as though the author's lighthearted sense of humor does not hit well with some of her stories and comes off more...disingenuous and cold towards some of the people she had worked with and on.

I guess, I am just not a huge fan of the person here. But either way, if you're a death curious person...I would suggest this as a listen whilst working.