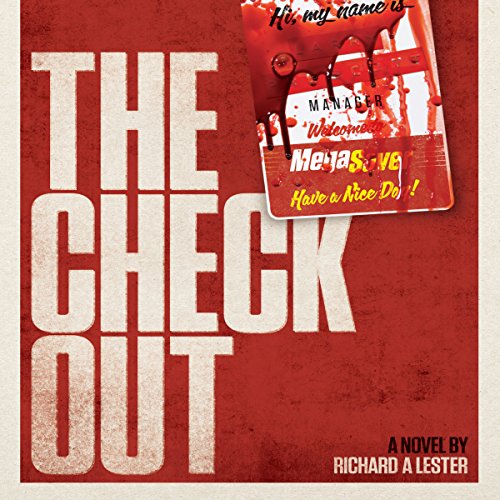 By: Richard A. Lester
Narrated by: Steve Ember
Try for $0.00

Failing grocery store manager Larry Prescott just wants a quickie. With a frigid wife waiting at home, Larry decides to have some extramarital fun with an employee named Maxine Watkins. Though he has no way of knowing it, Larry is sowing the seeds for a crime spree that will be dubbed “The MegaSaver Massacre”.

The Check Out is a satirical thriller that will appeal to fans of Carl Hiaasen and Christopher Moore. It is the story of a $10,000 giveaway, and the employees who independently decide to heist the money on the same night. An ensemble piece, each chapter focuses on the motivations and actions of a different main character. Larry Prescott is an arrogant drunk whose affair quickly spirals towards danger. Maxine Watkins is a scheming liar, determined to claw her way out of indigence. Terrence Claybrook, the assistant manager, is an escaped convict trying to keep his past from catching up to him. Roland Tillman, a blood thirsty fugitive, reunites with his former cellmate during the MegaSaver robbery. Brad, an addiction ridden stocker, tries to turn his life around while picking up the pieces of a broken marriage. They each see the prize money as their only lifeline, and are determined to do everything necessary to grab it.

What listeners say about The Check Out

is an enjoyable farce

Larry is the angry manager of the failing super store he used to own. He and a ragtag group of misfits separately plot to steal $10,000 in prize money. Each has a different plan, all of which are poorly devised and likely to end it flames.

There is a lot to like about The Check Out as long as you take the story as a farce. Most of the characters are bungling idiots who would be fired on their first day on the job. It is inconceivable that Larry, for example, could drink constantly on the job, swear at his corporate employers, show up late, leave early, steal from the nightly deposit and still keep his job. On the other hand, he is deliciously nasty, an amalgam of all the awful bosses each of us have had and love to hate. The corporate marketing wizard is a yoga and meditation fanatic who guzzles sodas and junk food. The contradictions and hypocrisy are mostly funny and fully of irony.

The mood of the novel is airy and light-hearted, even though the language and graphic sex scenes are not. The characters are cartoon figures caught in the bright like of reality, with no concept of how to run their own lives, let alone a multi-million dollar super store. The plot is simple, get through your immediate crisis by stealing a bit of money, without worrying about how to fix the real problems driving your life into the ground.

The story is read by Steve Ember. His beautiful baritone seems to have a smile throughout. Though he reads a bit slow for this listener’s taste, he does an excellent job of character voices and keeping who’s who straight. There is a folksy quality to the narration that adds a light-heartedness to what might be a bleak tale.

The Check Out has some flaws, such as well-developed characters without purpose in the story, but taken in its entirety is an enjoyable farce. It is a gang of idiots doing everything they can to make a bad situation worse.